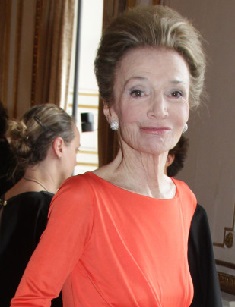 Lee Radziwill was born on March 3, 1933, in New York. She is also known by the names of Caroline Lee Bouvier, Princess Lee Radziwill, and Caroline Lee Radziwill. She was an actress, a fashion influencer, a socialite and an interior decorator. She passed away on February 15th, 2019 at the age of 85 years. She was the style icon who was known for her elegance and perfect taste for half a century.

Lee Radziwill was born in New York City to parents John Vernou Bouvier III who was a stockbroker and Janet Norton Lee who was a socialite. She had three siblings including Jacqueline Kennedy Onassis, Janet Auchincloss Rutherfurd, and James Lee Auchincloss. Her sister Jacqueline Kennedy Onassis was the first lady of America and the wife of former president John. F. Kennedy. She was the second daughter in the family. She got her name Lee from her maternal grandfather whose name was James T. Lee.

Her parents split up when she was only two years old. Her mother later married Hugh D. Auchincloss. She had two step-brothers, a half-brother and a half-sister and a step-sister from her new parents.

Lee Radziwill attended boarding schools during her childhood. She and her sister were sent to the Potomac School in Washington as well as Miss Porter’s School which was in Farmington, Connecticut. After passing from high school, she finished her graduation from Sarah Lawrence College.

It was in the 1960s when Lee Radziwill rose to fame as she attempted a career in acting. However, the acting attempt was not successful. She was a part of The Philadelphia Story that released in 1967 and played the role of a spoiled heiress. The play was staged at one of the biggest theaters in Chicago and people did not like her character. After this, she appeared in a television show which was the adaptation of film Laura and was again a failure.

Since she did not have a successful career in acting, she shifted her focus towards interior designing. She worked as an interior designer for a short time. She owned a townhouse in London which was decorated by Lorenzo Mongiardino who was a famous Italian stage designer. Bother her houses were admired and photographed by home décor enthusiasts. While working as an interior decorator, she usually had wealthy clients.

She also got really famous because she was usually in the company of celebrities. She was usually seen travelling with The Rolling Stones. She had an apartment in Paris, and one in Manhattan and both of them were featured in Elle Décor magazine for the April 2009’s issue. She was also well known for her impeccable style and was named one of the people in the International Best Dressed Hall of Fame in the year 1966.

She was a fashion icon and influenced a lot of people through her fashion sense. She was interviewed by a lot of magazines. Even when she was old, she was considered to be one of the best-dressed people in the world. She and her sister Jackie Kennedy were often seen at the designer stores and were very fond of high-end brands and designs. Lee Radziwill’s height and weight complimented the pieces designed by the designers the most. She was also very fond of jewellery pieces and earrings, and other jewellery choices have always been praised by fashion experts.

Lee Radziwill also hired documentary filmmakers in 1972 to make a movie about her Bouvier family. However after interviewing Radziwill’s aunt and cousin the project was left halfway because of lack of funding. However, the filmmakers that were hired for the project namely the Maysles brothers were extremely interested in the life which these two women lead, and they started raising funds. The film was later created in 1976 and is still considered to be one of the masterpieces in the documentary genera. It was called The Grey Gardens, and it has also been turned into an HBO television movie in 2009 with the same name.

She worked as the public relations expert for Giorgio Armani and also worked at various other high-end brands. She also wrote a lot of bestselling books and was an established author.

Lee Radziwill’s biography was also published in many magazines and newspaper articles after her death.

Lee Radziwill got married three times. Lee Radziwill’s first husband Michael Temple Canfield met her during a trip to England. Lee Radziwill’s husband was a publishing executive. They got married in 1953 when Lee Radziwill was only 20 years old. They got divorced in 1959 only after 6 years. She found her second husband while she was married to her Michael Canfield. As soon as the divorce proceedings took place, she married Prince Stanislaw Albrecht Radziwill who was a Polish aristocrat. He had also divorced his second wife.

On marrying the prince, she became Princess Caroline Radziwill. This marriage lead her to have two children. Her son Anthony was her first born and after a few years Lee Radziwill daughter’s Christina came into the world. However, they still got divorced in 1974, fifteen years after marriage. Lee Radziwill’s children stayed with her.

In 1988, she again tied the knot with the American film director Herbert Ross. The couple filed a divorce in the court which was only finalized after the death of Herbert Ross. After his death, she took back the surname Radziwill just like her kids. Lee Radziwill’s daughter Anna Christina and her daughter-in-law took care of her during her last few days.

Lee Radziwill was the sister of the former American First lady, Jackie Kennedy and it was revealed that they had a pretty complicated relationship. Both the sisters have now passed away, but a new biography that has been written by Nancy Schonberger and Sam Kashner revealed that there is a chance that Lee Radziwill had an affair with John F. Kennedy. The book named as The Fabulous Bouvier Sisters has an extract from writer Gore Vidal’s who the stepfather to Lee and Jackie was.

He wrote that Lee’s first husband told him that his wife had slept with her brother-in-law. However, it is still unclear that Vadal has told the truth as he also had a somewhat complicated relationship with both the sisters and he was famous for spreading gossip.

Lee Radziwill funeral took place after her death on February 15th, 2019, and the cause of her death has not been stated by her family. Lee Radziwill obituary was printed on all major newspapers and was also featured on Vogue magazine.

Lee Radziwill death was a shock to many and condolences poured all over the internet. Lee Radziwill cremated, and a small funeral was planned only for the close relatives and friends.