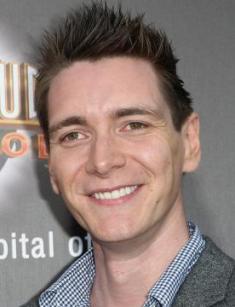 James Phelps is a young British actor whose filmography includes only one significant role by now: Fred Weasley in the Harry Potter movie series.

James Andrew Eric Phelps was born in 1986 in Sutton Coldfield, near Birmingham city. His name includes the names of the grandfather and uncle. He has a twin brother, Oliver, who is 13 minutes younger. The boys were as like as two peas, and only the mother Susan could tell her sons apart.

The brothers graduated from the Little Sutton school and the Arthur Terry Secondary School. Similar to many kids of that epoch, they devoured books about Harry Potter. When the mother learned about the auditions to the screen adaptation, she took James and Oliver there, despite the long distance.

Later, the twins’ father Martyn remembered they were discouraged by the number of rivals during the auditions at first but then pulled themselves together. Following six tours, the boys received the long-awaited parts of George and Fred Weasley.

Classmates did not believe that James and his brother were going to star in Harry Potter. When they appeared with a new hair color, red, skeptics had no doubts, finally.

Harry Potter and the Philosopher’s Stone was the first project for the young talents. James personified Fred, one of the many children in the large Weasley family, a cheerful hooligan, and a student of Gryffindor. The movie started an international rash among fans; the movies about a young magician boy were always top-grossing.

The 2002 sequel, Harry Potter and the Chamber of Secrets, was just as popular as the first part. The cast consisted of the same actors as in the first part, and James and Oliver were among them. The Phelps brothers also appeared in six other movies based on Joanne Rowling’s novels.

Harry Potter and the Goblet of Fire is James’s favorite movie; Lord Voldemort is his favorite character. The actor wanted to keep a magic wand as a memento, but it was a must-have attribute of the advertising tour. Thus, he took some banknotes from the Gringotts Wizarding Bank.

By the way, the brothers liked to substitute each other, as many twins do. Although they did not perform that in real life, Oliver wanted to portray Fred, so he and James changed. It was revealed soon. Despite the Phelps siblings bore much resemblance to each other, the directors decided to re-film the episodes where the tricksters stood in for each other.

James was pretty emotional in his interviews when the scene of Fred’s death was discussed; he compared it to playing in an action, not fantasy. It was not difficult for the young man, but he was worried about Oliver, who had to play the character surviving through his brother’s obituary scene.

2009 brought some novelties in the twins’ filmography. James played Callum Anderson in the third season of the British TV series Kingdom. It is a story about a former lawyer living in a small town. He decides to come back to the business after his brother disappears; young Lyle (Karl Davies) assists him. Lyle has two twin brothers, whom James and Oliver played.

In 2012, the actor participated in the horror Ward 3 and personified a nurse Jimmy working in a children’s hospital. His colleague accidentally kills a boy, and his ghost is chasing the woman, driving her crazy. It is one of the few moments where James played without his brother.

Danny and the Human Zoo is another movie starring Phelps. He also appeared as Guildenstern in a screen adaptation of William Shakespeare’s masterpiece Hamlet. The American-Canadian comedy horror Patchwork was marked with a small part for James. Besides, he could be seen in the short movies A Mind’s Eye, Hogwarts Express, the series Daybreak, and Silent Witness.

James likes sports, Playstation games, and rock music. The brothers love golf and soccer and support different clubs; they often argue which of them is better. The passion for golf developed when the artists were starring in Harry Potter: they were forbidden to do dangerous sports that could cause an injury. James Phelps became good at gold; his height (6.27 feet or 191 cm.) was an additional advantage.

Phelps often shares the music he likes on his Instagram page. He created a collage of albums and sometimes posts photos from festivals and concerts; James also plays the guitar. According to the man, he prefers fish, sweet desserts, and chips. Dogs and horses are the loveliest animals for him; blue is his favorite color.

James Phelps married his girlfriend in 2016, but little is known about his wife. The woman’s name is Annika Ostle; however, some sources give a different name, Amelia Charlotte Diego.

The British are usually reserved and remoteness when it comes to talking about one’s family. However, there have been other reasons for the absence of the details: rumors have it the brothers signed contracts about limited publications on personal issues. However, James announced his wedding on the radio. The actor and his wife have no children.

The artist dreams of playing an antagonist in a James Bond movie or, at least, play the agent himself.

James is a simple, cheerful, and active person; he is pleasant to talk to. Fans of the Harry Potter franchise have created many clubs, and the actor participates in thematic events sometimes. In summer 2017, Phelps traveled across South East Asia and visited the Harry Potter Exhibition in Madrid and Steel City Comic Con 2017. Besides, Oliver and James created a YouTube channel at that period.

The beginning of 2018 was marked with the Harry Potter Celebration in Universal Orlando. The actors met with their colleagues Emma Watson, Natalia Tena, Bonnie Wright, and Stanislav Ianevski.

Apart from social occasions, James does a lot of charity work in Help Harry Help Others and Virgin Money Giving organizations. He is also an active member of the Three Peaks Challenge, where amateur mountaineers climb three peaks within a day.