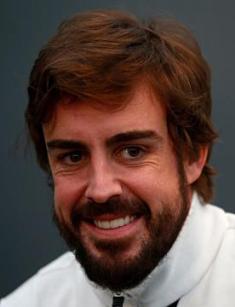 Fernando Alonso was born in Spain on the 29th of July, 1981. The boy's family didn’t have millions of dollars, but the parents fully gave him attention and care. His father Jose Luis worked as an explosive expert, and his mother Anna Diaz worked as a sales assistant in the shop. Fernando has an elder sister, for whom his father constructed a cart for her 8th birthday with his own hands.

This gift didn’t capture the interest of the girl, but her little brother could hardly move away from this red-and-white car. The father understood that his son had inclinations to become a racing driver. He was convinced of it after his little sun got behind the wheel with confidence and went for a drive in the kart, though he hardly turned three at that time. Alonso Sr. considers this moment in Fernando’s biography a starting point to the sports world.

José Luis was fond of karting and from time to time he even took part in amateur races. He also tried to instill this passion in his own kid. And definitely, he has had success in this. The boy was growing quiet and obedient, and he only gave will to his feelings and emotions when he was behind the wheel of the kart. His mother was delighted with her son's excellent marks and his father was happy with his son’s abilities to piloting.

The parents were preoccupied only by the fact that Fernando tried to get the highest speed maximum out of the car and pressing the gas to the floor.

The Asturian received his primary education at Santo Ángel de la Guarda, where he was studying from four till fourteen. Having finished the school, the talented young man entered Leopoldo Alas Clarín de San Lázaro Institute. The teachers remember about this humble student only in good words, but they regret that he didn’t complete the higher education because of his love for the sports.

At first, the young Spanish took part in the competitions which were held in his native town. For three years the boy has developed his talent in such a way, that he already overtook the peers and even teenagers. The prodigy had his first success at the age of seven when he became the winner of Asturias Championship where he finished the first in eight races.

After such a great victory, there has begun Alonso’s triumphant march around Spain, where he collected all possible awards and cups. Nobody could defeat the skilled young man. Already at the age of twelve, he won the Spanish Karting Championship of Spain, and during the next five years, all victories belonged to him as well.

The year 1997 brought the victory in the Spanish Inter-A series and a title of Italian champion to the young racing driver. Having shown the talent in the international series, he was noticed by Andrian Campas, a former racing driver but the acting manager of Nissan team. Andrian invited Alonso to become a member of his own team and he made the right choice. The young man, who was sitting over from the kart to the racing bolid, immediately proved his best.

The young Spanish became a winner for six times out of nine races at European championship of Nissan Formula, where he became the vice-champion. Next year Fernando took part in Formula 3000, where the skilled and experienced racing drivers became his rivals. Performing for Astromega team, he was ahead of everyone during the last race and became the fourth in the overall ranking of the year.

Alonso had his debut race in Formula One in the Australian Albert Park in 2001, where the young man was transferred from the test pilots to the main team of Minardi. At that time Alonso was only nineteen. The talented racing driver got an outsider car, so he didn’t manage to score the points and to become one of the leaders. In comparison with the partners, he was rather good and even didn’t concede in the showiness and efficiency of the races to Kimi Raikkonen and Juan-Pablo Montoya.

The success of the talented racing driver wasn’t unnoticed by the director of Renault F1 team, Flavio Briatore, who appointed Alonso as a third pilot. The racing driver doesn’t like to remember the season 2000, as he had to be a reserve for Jenson Button and Jarno Trulli. But in 2003, Alonso was transferred to the main structure, where he displayed his potential and proved that the secondary roles weren’t interesting for him. He proved this during the race in Malaysia and with his honored pole, as well as with the second place in the Spanish race and triumph at Hangaroing in Hungary. He finished the season with the 6th place in the personal offset.

The season 204 became a serious challenge for Fernando Alonso, as he had to "fight" against Ferrari team and Michael Schumacher. Though even here the Spanish distinguished and took the 4th place, and scored 59 points. In 2005, the young Spanish racing driver became the king of Formula One, overshadowing Schumacher, who had repeatedly won the champion title for 5 times. Next year (2006) Alonso one more time took the honorary champion title, but already at Brazilian Grand Prix at the end of the season.

In the season 2007, the Spanish racing driver drives for McLaren team, the contract with the management of which was concluded in 2006. This year became the hardest challenge for the driver’s forth of will and self-possession. The case is that the management decided to replace Pedro de la Rosa (Fernando's partner) for Lewis Hamilton, this became a great mistake in the strategy. In the team there began the scandals, intrigues, and proceedings which were incited by the rookie and his father. The case even went to the trial that resulted in the disqualification of McLaren. The photos from the court hearings and litigation flew over the Internet. The internal problems of the team disturbed Alonso during the races, so, by the results of the year, the Spanish managed to achieve only the third place and scored 109 points.

After the grandiose scandal, the racing driver spent t two next seasons in the previous Renault team, but he couldn’t proceed further than to the fifth place. Although he demonstrated excellent results during Singapore Grand Prix and in Japan as well. Though even this year didn’t pass without a scandal in which Flavio Briatore (the head of the team) was involved, who faked the accident at Grand Prix. The proceedings finished with the resignation and lifetime disqualification of the manager.

The year 2010 was marked for the well-known Spanish with the transfer to Ferrari, which for this reason broke the contract with Kimi Raikkonen ahead of schedule. Sebastian Vettel turned out to be a serious rival, who didn’t let Alonso achieve the title of the champion, who earned 4 points more. By the way, Vettel's wife, Hanna Prater, was all the time watching the races at that time.

The 2011's season was marked with the excellent moment in the Spanish pilot's career when he took fourth place in Singapore. The experts have calculated that in 2011 Fernando received the missing points to 1000. At the same time, he became the second racing driver by that indicator in the history of Formula.

During the next season, the racing driver was competing violently with Vettel who again bypassed him at the finish line with the gap of three points. The Spanish received the title of the vice-champion. In 2013 there were changes in the Italian team, what the leading driver didn’t like at all. Then his long-time rival Kimi Raikkonen returned to the team, though the personal dislike didn’t prevent him from taking second place and scoring 242 points.

The year 2014 was expected as an explosive one because of the rivalry of the Finn and Spanish, but nothing happened. During all the time Fernando Alonso was holding the leading positions and kept the rival far from the champion title. At the same time, he himself twice took the prize-winning places. At the end of the season, he announced his return to McLaren team. By the words of the fans, this happened because of the complex interpersonal relations inside the team.

In 2015, the driver found himself at the bench as he had an accident during test races in Barcelona and was taken to the hospital with a brain concussion. During the second part of the season, Alonso faced constant failures with the technique, as a result of which for two races he scored only 11 points and didn’t proceed in the tournament table. Nico Rosberg received the first place driving Mercedes AMG, Lewis Hamilton occupied the second position and Daniel Ricciardo who was driving Infinity got the third place.

In 2016 at Grand Prix the Spanish racing driver took part in the first races, after which he got in the accident and again found himself at the bench. But he managed to defeat Jenson Button for 54 points.

The famous Spanish racing driver prefers to keep his personal life in a secret, but the journalists can find a loophole to know the details of the celebrity’s biography. As soon as there appeared the rumors that Alonso had a love affair with the Russian model Dasha Kapustina, the press tried to find the supporting facts. At once they found Dasha’s Instagram, which was dedicated to her fiancé Fernando.

Young people have been in a relationship for three years and they broke up at the initiative of the man. In a year after the parting with Kapustina, the handsome man got acquainted with the model Lara Alvarez. During a couple of years, the press was deliberately trying to ’’marry’’ young people, but in 2016 the loving couple broke up their relations. Different views of life and busy working schedule became the reasons for their break-up. At the latest photos, one can see than there is no more engagement ring on her finger.

At present, the racing driver lives in Melbourne, where he passes pre-season tests before Grand-Prix 2017. In this season he will drive for McLaren-Honda team.

From the last interview, it became known, that the racing driver hoped for the rain during the first race. The reason is banal – he considers his bolid isn’t competitive enough, that’s why he hopes for bad weather.

What about the net worth of Fernando Alonso, at present time it’s estimated at $240 million.