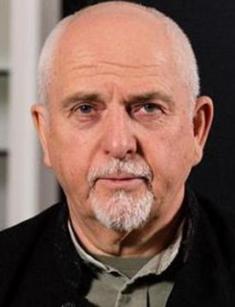 Peter Gabriel is a musician whose creative biography is full of unpredictable events. The first popularity came to the singer and musician when he was a part of the band Genesis. Having reached the limits of collective creativity, Gabriel left the band and became a solo performer. The performer conquered the music Olympus and then created his own label called Real World and now produces new stars and organizes festivals.

Peter Gabriel was born on February 13, 1950, in the town of Chobham, Surrey, England. He was not an only child in the family. A year and a half after his birth, the family was happy to have a daughter whom they called Anne.

Gabriel's father worked in London as an electrical engineer and was a talented inventor of radio equipment and agricultural machinery. Mother was fond of riding and music. She was the head of a music club, organized concerts and tried in every possible way to attract children to this activity. But in his youth, Peter was more interested in walking with friends.

At the age of 13, the boy was sent to private school Charterhouse School. There he studied graphology, astrology, poetry, and music. Poetry and music became the subjects of Peter's interest. He shared this interest with his friend, Tony Banks.

These guys played musical instruments together, imitating Otis Redding. Tony possessed the skills to play the piano, and Peter was engaged in vocals. Two years later, Gabriel became a drummer in the school band Milords. A year later, he changed the band, becoming a member of Spoken Word, based in Dorset School Spoken Word.

The second band was more successful and even made a demo, but did not win the public's recognition. Peter decided to develop in a solo direction and together with his old friend Tony recorded the song "She Is Beautiful." This composition was the debut for the new band, which the guys called Genesis. Working in the team, Peter Gabriel succeeded as a dramatist, vocalist, creative producer, designer and master of performance.

Peter and Tony were joined by Mike Rutherford, Chris Stewart, and Anthony Phillips. In the summer of 1966, there was a fantastic coincidence that gave the guys a chance. Musician and producer Jonathan King arrived at their school. The aspiring artists gave him the demo, and King gave the guys the opportunity to become stars. The future artists signed a year contract. The producer came up with a name for the band, and this moment became the main one in the history of the band Genesis. The debut single "Silent Sun" was recorded in the winter of 1967.

In 1968, Anthony Phillips left the band and was replaced by John Mayhew. In 1969 the first album of the band called From Genesis To Revelation was presented. The marketing campaign to promote the album was not well thought out, or in fact, the recording studio did not make such commitments. Therefore, the premiere was a failure.

The musicians did not despair and continued doing what they loved. They were lucky again: in the early 1970s, the band was invited to play in support of the then popular band Rare Bird. The headliners liked their work, and the artists recommended their producer George Anthony to pay attention to the novice band.

The producer told Tony Stratton-Smith about the new band. On behalf of the Charisma company, he offered Genesis a contract to cooperate and represent them as a manager. Fortune smiled at the musicians who have already started working on a second album called Trespass.

The record was praised by critics and the public, although it was not a commercial success. In this period, John Mayhew left the band, Phil Collins replaced him, and after a while Steve Hackett joined the team. In this line-up, the band took the first wave of success.

The image of Peter Gabriel played a significant role in the demand for the band. Each concert the artist made extraordinary and unique, creating a show on stage. He went out to the audience in the image of an older man with a flower instead of a head or put on a mask of a fox.

At the Drury Lane Theatre in London, the musician appeared in the image of a hangman, and in Paris, the first compositions were performed by a double doll. Gabriel did not exceed the norm and knew the limits of what was acceptable, knowing how to surprise the audience with new ideas. By 1974, Genesis was at the peak of the top rating in the category for live performances.

Gabriel was part of the band from 1967 to 1975. He wrote most of the compositions of those years. The frontman decided to leave Genesis in 1975 and took a short vacation in the village. The news that the singer is preparing a solo album made a splash. For a year, the singer worked on a record that should not have been a single melody that reminded him of the sound of Genesis. Peter told in his work about personal feelings and his own perception. Working in a team, he did not have such an opportunity.

The soloist's debut album was released in 1977. The single "Solsbury Hill" was incredibly successful. The songs on the record weren't united by the same style. Gabriel wanted to show the audience the maximum. The producer of his next album was Robert Fripp. In 1978 it was presented to the public. Curiously, the first two records did not have official naming. Unofficially, the first was called Car and the second – Scratch. The albums on sale could only be distinguished by their cover design.

At this point, Gabriel was a famous artist, but his work was interesting to a small number of listeners. The singer's perseverance was excellent, but it was justified. The third album was sold with great success in the UK and the USA.

The album, unofficially called Melt, was released in 1980. She was immediately at the top of the charts, and the single "Games Without Frontiers" became a megapopular one. The artist understood that he was getting tight in the performer's niche, and tried himself as a producer of the beginning band Sham'69.

In the same year, Peter got interested in the festival's direction. He organized WOMAD. This is a series of international events that brought together different areas of music, dance and performance of artists from around the world. The first festival was held in 1982 and gathered 300 artists from 21 countries. The audience was delighted, but the event did not pay off and drove the producers to losses.

The situation was solved with the help of old friends from Genesis. They gave a charity concert and helped to solve the financial issue. Today the festival is flourishing. WOMAD was the starting point for the creation of Gabriel's Real World Studios label. Thanks to him, many artists found their way into the field.

In 1986, Gabriel got a recognition. His next album called So won a Grammy Award. The artist's songs were breathtaking, and the videos excited the imagination. A video for the song "Sledgehammer" won several awards and was broadcast continuously on MTV channel. The record became platinum twice, and British Record Industry named the singer the best artist of the year.

In 1987, the vocalist became a 4-time Grammy nominee, but his luck didn't smile. But the video for "Sledgehammer" won 9 awards on MTV Channel. A year later, the musician performed as a composer of soundtracks for Martin Scorsese's The Last Temptation of Christ. Among Gabriel's hits of recent years were " Red Rain," a song with Kate Bush "Don't give up," "The Veil."

In 1971, Peter Gabriel married Jill Moore. Her father, Lord Moore of Wolvercote, served as Private Secretary to the Queen, so the wedding was gorgeous. Peter and his wife and newborn daughter moved to the countryside on sabbatical. He enjoyed farming, learned spiritual practices, and sought inspiration.

It was impossible for the singer to combine his personal life with his creative work. Two children did not save the failed marriage, and the spouses divorced in 1987. The end of their relationship was accompanied by mutual cheating.

Peter had an affair with Rosanna Arquette, and then a brief relationship with Sinéad O'Connor. In 2002, Peter Gabriel married his longtime girlfriend, Meabh Flynn. Before the wedding, the couple was in a 5-year-long relationship. They had a son Isaac. He was born in 2001. In 2008, the couple gave birth to the second son named Luc.

In 2019 Peter continues to work on his own Real World Studios music label and continues to organize WOMAD festivals. The musician is looking for any way to express himself, so in 2000 he staged the performance OVO: Millennium Show, in which he performed as a lead actor.

Gabriel runs a human rights monitoring organization. It is called WITNESS. For active social activity the musician received the Man of Peace award from the Nobel Peace Prize laureates in 2006.

In the winter of 2019, Peter Gabriel's name was linked to rumors of a concert organized by Richard Branson on the border between Colombia and Venezuela. The artist was supposed to perform at the event but did not appear at it. In 2019, Gabriel was among 50 artists who urged the BBC to ask for the Eurovision Song Contest to be moved out of Israel, citing human rights concerns.

It was estimated that Peter Gabriel has a net worth of $90 million.