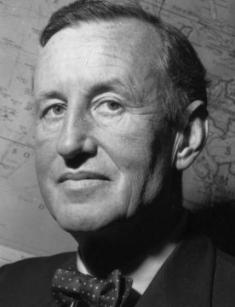 English writer Ian Fleming became famous as the creator of James Bond, the most renowned superspy in literature and on the screen. Bondiana brought the author worldwide fame and formed the basis of dozens of movies that became hits. Playing agent 007 is considered honorable because the charisma and charm of the adventurous hero invariably attract the attention and win the love of millions of viewers. In anticipation of the next movie adaptation, thinks about the question of who will have the honor to embody one of the most courageous characters of cinema this time.

When Ian Fleming created the image of a hero who lived in luxury and used only expensive things, he knew what he was writing about. The family of the novelist belonged to the upper class of British society and could afford to have several mansions in the capital at the same time.

Socialite Evelyn was a passionate and active nature, her husband Valentine, a member of the UK Parliament, was able to provide his wife with a comfortable life. The couple had four sons, and the future writer Ian Lancaster Fleming, who was born in 1908, became the second child. The older brother Peter also engaged in literary activities, and the younger ones, Richard and Michael, became financiers.

The father of the family died during the First World War: as a major in naval intelligence, the man came under fire on the Western front. He left his widow a substantial inheritance. The woman intended to give her sons the best education possible, so the children attended the prestigious private school Durnford, which prepared for admission to Eton College. Eton brought up members of the nobility, and most diplomats, politicians, and prominent public figures came out of its walls.

As a child, Ian already showed his character, came into open conflict with the leaders of the school, and became a leader. In those years, the boy began to be fond of golf and experienced his first love. The death of his father had a strong influence on the children, and his memory was kept as sacred. An interesting fact is that a photo of Valentine's obituary, signed by his close friend Winston Churchill, always hung in his son's room.

In 1921, the future writer became a student at Eton College, where he earned fame as an athlete and ladies` man. However, things weren't as bright with studying and discipline. The guy got used to breaking the rules and doing what he wanted. Due to problematic behavior, the mother took her son out of school and transferred him to the Royal Military College, but Ian was not going to put up with strict orders, and the guy was expelled again.

Wanting to put her son in The Foreign and Commonwealth Office, Evelyn sent Fleming to Austria, where he was to be educated in a private school. The young man traveled around Europe and took courses at universities in Switzerland and Germany. However, this did not help Ian during his interview with the British Foreign Office.

Ian Fleming began his career as a journalist. Under the protection of his mother, the young man collaborated with the Reuters news agency and went on business trips abroad. Among other countries, he visited the USSR.

The man decided to continue his career in the banking sector; fortunately, some of his relatives occupied significant posts in this area. Fleming tried himself as a stockbroker and financier but did not succeed. Then the future writer decided to follow in the footsteps of his father and got went into military service in naval intelligence. From 1939, Ian became assistant to rear Admiral John Godfrey and, lacking military education and qualifications, succeeded in his position.

By the beginning of World War II, Fleming had become an essential ally of Godfrey, taking part in the development of secret operations and espionage strategies. The employee's plans and suggestions were often unexpected and witty, and the report forms could be read as fascinating novels. In the service of her Majesty, the man had spent the entire war coordinating with the allies, searching for secret laboratories, and developing special operations. With the end of hostilities, Ian resigned.

James Bond appeared in a mansion in Jamaica, where the writer moved in search of a quiet life. But the ideas of the novel appeared in the author during the war. The first book that began the famous Bond series was Casino Royale, written in 1953. The name of the main character sounded like one of the most common names that one could hear in a crowd. That made him unnoticeable and inconspicuous, as befitted a real spy.

Experience in intelligence and the ability to live in a big way formed into a single puzzle, which manifested the image of the main character, cheerful, cynical, and adventurous. He got away with it under any circumstances, without losing his taste for life and trying to take everything from it. The first edition sold millions of copies, and the writer became popular. While the public was reading the paperback spy detective, the author immediately started working on the sequel. The second work was Live and Let Die.

Critics condemned Fleming's work for its lack of ethics and its extensive coverage of sex and violence. However, this did not prevent the works from remaining popular with English and American audiences. President John F. Kennedy admitted that From Russia, with Love was his favorite book. And the writer himself treated the works with a pinch of irony, saying that he wrote for entertainment and profit.

A total of 14 books about agent 007 came out of the pen of the former intelligence officer; the last was a collection of short stories Octopussy and The Living Daylights, published in 1966. By this time, Bond had already made three movies, which brought the author another wave of fame that made him rich. And Sean Connery, the first actor to play the spy on the screen, became a sex symbol and a movie superstar.

Like his character, Fleming led a stormy personal life, from a young age choosing beauties and being extremely popular among them. Already during his school years, the young man was said to have had many affairs with girls, and for one of them, he even got kicked out of school.

The first engagement the man concluded at the age of 23, but the mother of the writer was opposed to this marriage, and the wedding did not take place. In 1939, Ian started a relationship with married Baroness Anne O' Neill, who fell in love with the young soldier and dreamed of becoming his wife. However, even widowed, the woman could not achieve it: Fleming valued freedom too much and had no intention of tying the knot. Then Anne married another but did not stop loving Ian and in 1948, gave birth to his daughter, who died at birth.

Her husband was tired of putting up with infidelity and filed for divorce, after which in 1952, Fleming married her. In marriage in the same year, their son Caspar was born. In the family union, the spoused did not stop being polygamous. Preferring a free relationship, both had affairs on the side. The family lived in the Goldeneye estate in Jamaica, where the writer moved in the postwar years, finding the "Paradise on Earth." Blanche Blackwell, Ian's longtime mistress, also lived nearby.

The novelist's son committed suicide at the age of 23. The widow survived her husband and Caspar; she died in 1981. Both were buried next to the head of the family.

Ian Fleming lived carefree, indulging in every pleasure, including smoking and drinking. Therefore, he began to have problems with the heart and blood vessels early on. The writer suffered his first heart attack at the age of 53, and the consequences were severe. Despite this, Bond's "father" did not quit smoking and drank a bottle of gin a day.

Enormous fees for books and movie adaptations allowed the author to buy estates in the UK. One of them was located in Canterbury and was an 18th-century castle. It was here in August 1964 that Fleming suffered a second heart attack, causing his death.

On the way to the hospital, the man cheered up and joked with the medical staff, keeping his hopes up. However, it was not possible to save him, and the 56-year-old writer died. The celebrity was buried in a rural cemetery in Wiltshire, where there was a palace bought by Ian shortly before his death.

Several documentaries are dedicated to the life of the creator of Bond, and in 2011 an international airport in Jamaica was named in his honor. The novelist had imitators who, to this day, are trying to exploit the image of James Bond in literary works.