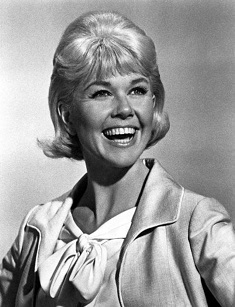 The actress is a real legend whose songs and movies became classic. The optimistic blonde with winning smile awed the crowd, at the same time the critics recognized her professional skills of the actress and singer. Day had a long and successful career but not simple personal life.

The skilled girl derived the acting talent from her father. Day's dad had a passion for music and had an artistic profession. She wasn't the only child in the family. Day had two brothers, one of them died after that she came into being. Day's family split when she was a youngster, and the girl lived with her mother.

Doris had a passion for dancing, but she was in a car crash where she had severe injuries on her right leg. That fact killed any chance of dance career. While she was recovering she focused all her attention to vocal. Her teachers of music anticipated girl's prominent career.

Day is a talented and successful artist, who appeared in more than 30 movies and TV shows. She is mostly a star of romantic comedies. The crowd loved Doris for her innocent charm and optimistic nature. This cheerful lady with a lovely voice and sincere smile gave hope for a better future, and her down-home demeanor made her a close friend to her fans.

Her first steps in career started from local bands where the young actress performed and sang. She made her solo debut in 1947, since that time she recorded about 600 songs on the Columbia Records Label.

She took part in a series of successful comedies, musicals, and dramas. In 1949 Doris stared in two films. Her popularity grew thanks to movies and her song It's Magic that gained a nomination for an Oscar. She played in the film Calamity Jane where her Award-winning song Secret Love sounded. She also starred in Hitchcock's film The Man Who Knew Too Much in 1956.

Then she took part in the other musical comedies. The actress broke her contract with Warner Brothers and worked with her husband who became her agent. That time Doris tried herself in drama in Love me or leave me. The film has critical success. Later Doris called this movie the best one where she starred.

At the end of the 1950s, her popularity started decreasing. Though her movies gained warm critic previews, she couldn't reach former glory. In 1959 she starred with Rock Hudson in the film Pillow Talk, this film returned people's attention. In the 60s directors commend her acting skills but ignored her as a singer.

At the end of 60s time began changing. The sexual revolution made the movie more candid meanwhile Day's movies stayed naive and chaste. Due to the purity of her roles, critics named her Queen of Virgin. That time the actress gradually was losing her status of A-list star.

In the 1990s Day's films and songs were becoming popular again. The new album Simply the best! Includes all hits of Doris made her so famous.

Rock Hudson movies became the most successful films for Doris. Romantic comedy genre helped her to have prominence as an actress. These films gave her love of the audience. The actress is mostly associated with Pillow Talk, where she acted with Rock Hudson.

The other partner of Doris is James Garner; they made two successful films together and stayed lifelong friends.

Day appeared in sitcom The Doris Day Show. Despite the actress' reluctance to work on Television she had to do it. Her third spouse squandered her money, and the actress was in substantial financial trouble after her husband's death. The show was highly successful and lasted for five years.

When her acting career neared to end Day devoted her life to creating the animal foundation. Doris Day made an enormous contribution to culture and gained recognition from people and critics. There are two stars on the Walk of Fame in Hollywood for contribution to the promotion of cinema and music industry in the USA. When the Day's show came to end Doris hasn't appeared on screen anymore.

Doris visited some TV shows as a guest and gave big interviews. In 1974 she appeared on the show of Johnny Carson. This episode is an absolute must-see for her admirers.

The American artist had four husbands. There were one long-lasting marriage and three short ones. First spouse AJ Jordan is the father of her only son, Terry Melcher. In spite of producing a child, it was a brief marriage, as the couple divorced two years later. The longest legally recognized relationship lasts from 1951 to 1968. That wasn't a serene relationship for the actress. When her third spouse died, Day had been left deep in debt.

Her popularity had a weak influence on her relationships. Doris' success and fame were the reason of divorce with her spouse George Weidler who said that she wasn't ready for ordinary married life. The other cause of her short marriage was her love for dogs. The fourth spouse confessed that he felt that he always in the background after dogs.

Son was a massive part of her life. When he died, that was a real tragedy for her. The cause of her son's death is melanoma.

Before her death, the actress' net worth was estimated at $200 million.

The actress died on the 13th of May 2019 at the age of 97. For her age, she was in excellent physical shape, but suddenly she caught a severe case of pneumonia.