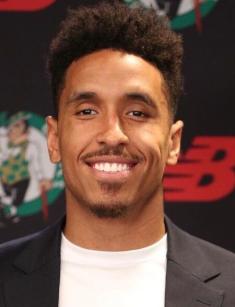 Malcolm Moses Adams Brogdon, who was born on the 11th of December, 1992, is a basketball player from Georgia. He is known for playing in the NBA as a point guard and shooting guard.

Malcolm was born in Atlanta, Georgia. He was raised in a well-established family; his dad, Mitchell, worked as a lawyer, and he even hosted a court show. His mom, Jahn, was chair of the psychology department. Malcolm's parents got divorced when he was only 11. He also had two brothers, Gino and John. During his childhood, Malcolm studied at a Christian private high school in Atlanta. Then, in 2011, he enrolled at a college in Virginia.

Malcolm's professional basketball career started back in 2016. His first team was the Milwaukee Bucks.

The Milwaukee Bucks picked Malcolm with the 36th overall choice in the 2016 NBA Draft on June 23, 2016. In 2016, on July 30, he joined the Bucks. On October 26, 2016, he participated in the Bucks' season-opening game. A plantar fascia injury in Malcolm's right foot caused him to be sidelined indefinitely on March 16 of this year, 2019. Late in the second round of the playoffs, he made his comeback.

Malcolm received a qualifying offer from the Bucks on June 29, 2019, turning him into a restricted free agent. In a sign-and-trade with the Milwaukee Bucks on July 6, 2019, Brogdon joined the Indiana Pacers in exchange for future draft selections. With the Pacers, Malcolm inked a deal worth $85.0 million over four years.

Malcolm was expected to take on a greater leadership role both on and off the court in his third season (2022) with the Pacers. From December to April, he missed 41 games due to an Achilles injury. Malcolm was the team's top scorer for the second year in a row despite missing a substantial amount of time, and he was second in assists per game.

Malcolm was dealt to the Boston Celtics on July 9, 2022, along with a few other players and a 2023 first-round lottery selection. He scored 16 points on October 18 as the Philadelphia 76ers were defeated 126–117.

Malcolm received a bronze medal while competing for the US national team in the 2015 Pan American Games.

Malcolm is the founder of Hoops20, the organization that uses its efforts to provide Africa with only clean water. By the way, as of 2022, Malcolm seems to be a single man.

Here is the list of achievements that Malcolm received throughout his basketball career: