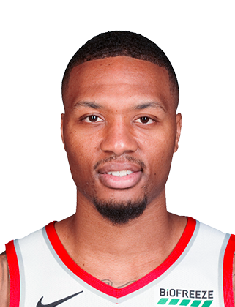 Born on July 15, 1990, Damian Lillard’s full name is Damian Lamonte Ollie Lillard Sr. He is an American National Basketball Association Player currently playing for the Portland Trailblazers. In his college year, Lillard was playing for the Weber State Wildcats. He has been successful in his college basketball journey. He was able to earn the third-team All American award in 2012. He's been drafted by the Portland Trailblazers last 2012.

From then on, Lillard is still playing for them until today. He was very dominant during his rookie season. He was able to receive the Rookie of the Year Award. He has been voted four times to play for the NBA All-Star. He became one of the four players in Trail Blazers history to be a four-time All-Star.

Lillard was born in Oakland, California. His parents are Gina and Houston Lillard. His sister's nam is LaNae and his brother is Houston. Lillard’s family was not really a big fan of basketball. Damian Lillard's brother was a big fan of football. He played as a quarterback of an Indoor Football League. On the other hand, Lillard loves to play skating and basketball at an early age. Most of his childhood days were spent skating with his friends and playing basketball in their local basketball court.

Lillard played for two schools during his high school years. He first played for the St. Joseph Notre Dame High School in Alameda, California until his sophomore year. This school was the alma mater of the NBA Champion Jason Kidd. After his sophomore year, Lillard decided to transfer to Oakland High School in order to have more playing time. He was able to improve his game and play styles with the help of their coach, Orlando Watkins.

Damian Lillard stats for points per game were increased to 22.4 points. He also played for the Oakland Rebels in the Oakland's Premier Amateur Athletic Union. It was in this team where he learned his killing moves, the step-back dagger, and backspin layups.

After graduating from High school, Lillard was offered a scholarship by Weber State University. He accepted the scholarship and played for them for his whole college year. He was able to finish a degree in professional sales last 2015. He improved his playing style a lot more. He was able to bring the Weber State Wildcats in the regular season conference championship. He was also chosen for the "Big Sky Player of the Year" by the Associated Press. Damian Lillard's college career was his gateway to the NBA.

Damian Lillard’s NBA career in 2012 started when the Portland Trailblazers drafted him. His debut game was against the Los Angeles Lakers where he tallied 20 points and 10 assists. He became one of the three players in the NBA history to score 20 points and 10 assists in a debut game. He finished the season with an average of 19 points for the whole 82 games of the season. He was voted as the Rookies of the Year for his exemplary performance and was able to win the Taco Bell Skills Challenge during the All-Star Weekend.

In his second season in the NBA, Lillard was able to be part of the All NBA Third Team. During this season, he dropped a career-high 41 points against the Sacramento Kings while recording the highest number of points recorded in a single quarter by any player. He was able to score 24 points in the fourth quarter alone.

Lillard’s performance in his third season in the NBA dropped. Although his scoring average dropped, he was able to break a record for having the most number of three-pointers by any player in his first season. He also tallied a new scoring record of 43 points against the San Antonio Spurs. Even though he wasn’t able to be chosen as part of the original All-Star 2015 team, he was able to play for the Western Conference Team as the replacement of Blake Griffin who suffered an injury during that moment.

Damian Lillard contract with the Portland Trailblazers was extended for five years. He signed the US$ 120-million offering of the team last 2015. During this season, he was able to break a lot of record such as the fastest player in the NBA history to tally 600 three-pointers in just 247 games and he was also the fastest players in the Trailblazer history to reach 1,500 assists and 5,000 points in just 248 games.

Lillard also faced an injury during his third year in the NBA. He suffered an injury in his left foot which forced him to miss six straight games. Before missing six games, he was playing for the Trailblazers for 275 consecutive games already. He returned in the basketball court and dropping his 2,000th NBA field goal against the Washington Wizards. He was also able to drop a new career high against the Golden State Warriors. Damian Lillard’s career took off during his fourth season was at 51 points already.

During the 2016-2017 NBA season, he was able to drop a total of 163 points for his first five games. This is the largest recorded points of any Trail Blazers players in the franchise history. He was able to score more than 27 points in each of the first five games. He was the only player in the NBA who was able to achieve this milestone. He was also known for his game take-over termed as “Dame Time”. It is when Damian Lillard’s clutch shots take place.

Damian Lillard’s injury made him miss a total of five games for the whole duration of the regular season. After the 2016-2017 season, Lillard was able to reach 8,000 career points. He was also named as the Western Conference Player of the Month in April 2017.

During the 2017-2018 mid-season, Lillard suffered a hamstring injury in his calf. But after recovering from the injury, he played big games and dropped enough points for him to be considered as the fastest Blazer to reach 10,000 points.

In his college year, Lillard was awarded Big Sky Freshman of the Year Award and two Big Sky Conference Player Awards. He was also named as part of the Big Sky All-Tournament Teams and three All-Big Sky First Teams.

Aside from his Rookie of the Year Award, he also achieved Two All NBA Teams. During the NBA All-Star, Lillard was able to grab three NBA All-Star Titles and an NBA Skills Challenge trophy. Also, his humble interaction to the media and to the general public made him the recipient of the Magic Johnson Award.

He was known as a religious guy. His Christian belief was explicitly shown from his psalms tattoos on his left arm. Damian Lillard’s jersey number also has its own meaning. It is the reminder of his journey from Oakland then moving on to Ogden and lastly to Oregon. It is also known that he is currently dating his college girlfriend Kay’la Hanson.

Aside from his basketball career, Lillard was also a rapper and hip-hop artist. He goes by the name of “Dame Holla” which means “Different on Levels the Lord Allows.”

Damian Lillard’s endorsements and NBA earnings gave him his current net worth which is around $30 million.