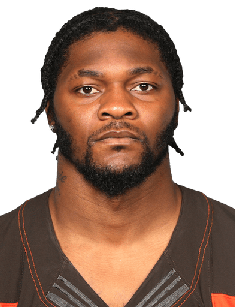 Jamie Collins is a professional NFL football player. He plays the position of linebacker. During his career, Jamie played in two famous American football teams: the New England Patriots (2013 – 2016, 2019 – present) and the Cleveland Browns (2016 – 2018). He was only the 52nd number of NFL Draft in 2013 but could help The Patriots to win the championship in 2014. Jamie is 29 years old; he has a son, two brothers and a sister.

Carolyn and Fred Collins lived in an unincorporated community in eastern Franklin County, which was called McCall Creek, Mississippi. They had four children, three boys, and a girl, and on October 20, 1989, the last one, Collins, was born. Unfortunately, five little children stayed alone, when their parents died from a heart attack. Then Collins was just six years old. Soon he lost a brother, Fredrick, who was struck by the same disease. The eldest of the five, Lisa took care of Jamie, Phillip, and Darryl.

Jamie played football at high school. He was a member of the local team, Bulldogs of Franklin Country. Jamie had changed some positions before becoming a good linebacker. For some time he was a quarterback, safety, receiver. Already at school, Jamie began to show outstanding game and in his first season on a new position the Bulldogs got the Class 3A State Championship. One year later, Bulldogs already participated in the state championship game. For the successful game in that tournament, Jamie was invited to the Mississippi-Alabama All-Star game.

Except for football player career, Collins was a great athlete and won some prizes for his school in shot put, discus throwing, high jumping, and triple jump.

Collins spent the college career in the University of Southern Mississippi, defending the colors of the Southern Miss Golden Eagles. The coach tried Jamie in different roles. During 2009 – 2012, Collins was DT (defensive tackle), DE (defensive end) and inside linebacker. He was invited to the All-Conference First-team following his brilliant performance.

He ended his college career with a record of three touchdowns, 314 tackles, three interceptions, and 21 quarterback sacks.

2013 was a turning point of Jamie’s life. At first, he took part in the NFL Scouting Combine. It is annual week-long testing of physical and mental abilities of college football players. It is held in February in Indianapolis at Lucas Oil Stadium. NFL coaches, scouts, and managers watch for the most promising and talented players. Collins was perfect at 2013 Combine. He set a record in broad jumping, was second at vertical jumping. His record was broken down only in 2015. Then the Pittsburgh Steelers invited him for a pre-draft visit in April of 2013.

At the Draft day, Jamie Collins was selected by the New England Patriots. He became the 52nd number of that year, drafted only at the second round. He signed his first contract on May 17, 2013. It was a four-year contract worth $3.75 million including a signing bonus of $1.1 million and a guaranteed sum of $1.86 million. Jamie was placed as a backup outside linebacker at the beginning of the 2013 season.

In 2013 Jamie signed his first professional contract. It acted until 2017. According to his terms, Jamie earned $3.75 million as guaranteed and different bonuses. It was an ideal salary for a beginner. Collins couldn’t immediately become the main outside linebacker. During the first time he was only a backup. He debuted in NFL in the match against the Buffalo Bills. Then The Patriots won 23-21. In the next game, Collins made two combined tackles and already in October 2013 earned his first career start. In that season Collins combined 43 tackles, 24 of them were solo. He played in 16 games and was in the starting line 8 times. During his first season, Collins could get into playoffs, but the Patriots were not successful there.

2014 was the best season in Jamie’s career. He began the year as the starting weakside linebacker. The head coach had high hopes for this guy. From the first games, Jamie started demonstrating outstanding effective playing. His solo tackles, deflections, and interceptions helped The Patriots to finish atop the AFC East with a 12-4 record. The most productive game for Collins was the victory under New York Jets, when he collected 13 combined tackles, seven of them were solo.

All in all 2014 brought 116 combined tackles (74 solos) in the statistics of Jamie, two important interceptions, four forced fumbles, and four sacks. All games of the season he was a starting player. For the regular season, he got the grade of 87.9, it was the 11th result among all linebackers of the league. In playoff games Collins played the key role, his good outstanding and productive playing in combination with a recorded number of combined tackles helped the Patriots to defeat the Seattle Seahawks 28–24 in Super Bowl XLIX.

Collins spent only 12 games in the champion status because of a minor injury. But it didn’t stop him to be selected to the 2015 AP All-Pro second team and to earn 91.3 points for the season from Pro Football Focus. He became the fourth among all qualifying linebackers in 2015. He was traded to the Cleveland Browns in October, 2016, but on May 15, 2019, Collins signed a new contract with the New England Patriots. He will try to lead them to a new victory in Super Bowl. So, he is still in the NFL.

The Browns bought Collins on October 31, 2016. The head coach immediately called him a starting outside linebacker. Jamie spent his first match for the Browns on November 6, 2016, when they played against the Dallas Cowboys. In 2016 season Collins collected 112 combined tackles (79 solo), a season-high was 15. The total rating of that year was 88.6, the 7th among all qualifying linebackers in 2016. However, the Browns finished the year with a 1-15 record.

In 2017 the Browns offered to a linebacker four-year contract. The full amount of it was $50 million and it became known via Over the Cap. It was $50 million. According to it, Jamie got $26.4 million guaranteed. But this year became the worst in Collins’s professional career. He injured, missed the most of the season and collected only 31 combined tackles (21 solo), and Pro Football Focus gave Collins an overall grade of 35.9. On March 6, 2019, Collins left the Browns.

Jamie Collins has a net worth of $3 million. He has a son named Jamie Jr. with girlfriend Casandra. There is no information if he married her or not. Jamie is not an active Instagram user, but recently his fans saw him spending holidays in the Maldives. The football player spends time with his friend Christian Kirksey.

You can see some photos of Jamie and his little son in his account. He loves good music, especially rap and such performers as Meek Mill, recently he claimed that his favorite song is Open Letter by Lil Wayne from his last album ''Tha Carter V''. The fans of the Patriots welcome Jamie after three years ago trade to Browns.