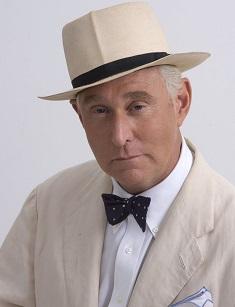 Roger Jason Stone Jr. is an American political consultant, political strategist, and author. He was born on August 27, 1952, in Norwalk Connecticut. He spent his early years in Lewisboro, New York and went to high school in northern Westchester County, New York. He continued his education and his pursuit of politics at George Washington University.

Stone’s life revolved around politics, he learned tricks to manipulate results in his favor at a young age. He claims that everything he has done between his early years and now was legal. During his time as a junior, he was the vice president of their student government. He used the tricks he learned to move his way up to becoming president in his senior year.

Stone was born in Norwalk Connecticut to Roger J. Stone and Gloria Rose Corbo on August 27, 1952. He grew up in a family of Italian and Hungarian descent in Lewisboro, New York. His father was a well-driller and a business owner while his mother was a small-town reporter.

At a young age, Stone had been learning and using political tricks. In 1960, he was pushing John F. Kennedy’s presidential campaign as an elementary school student. In what he describes as his first political trick, he would go through the cafeteria line and tell every child in line that Nixon wanted to have school on Saturdays.

As a junior, he was the vice president of his high school student government. He shaped the ouster of the sitting president and his succession with it. He had built alliances with all of his competition, then had the most unpopular student to run against him, securing his victory.

As a child, Stone was given a copy of “The Conscience of a Conservative” by Barry Goldwater. He became a conservative right after reading it and served as a volunteer in Goldwater’s 1964 campaign. Stone said in 2007 that he was a conservative with some libertarian leanings.

When Stone was in George Washington University in 1972, he invited Jeb Magruder as a speaker for a Young Republicans Club meeting. He then asked Magruder for a job under Richard Nixon’s Committee to Re-elect the president. With Magruder agreeing, Stone left college early to work for the committee.

Stone’s political career began when he became a member of Richard Nixon’s Committee to Re-elect the president in 1972. He would then work in the Youth for Reagan movement in 1976 as its national director. He continued to work for the Reagan campaigns in 1980 and 1984, then on Jack Kemp’s presidential campaign in 1988.

Stone would eventually become a founding partner of Black, Manafort, and Stone. The political consultancy firm he formed with his associates Paul Manafort and Charles Black would earn the reputation as one of the most aggressive and controversial firms in politics until today. It combined campaign consultancy with lobbying and would often reach out to Congress members that they helped to win to get votes for what they were lobbying for.

They would become one of the most influential groups to ever influence American politics. It would feature a long list of clients to lobby and elect, including corporations, trade associations, and foreign governments. In 1989, Black, Manafort, and Stone was described in the New York Times as a power broker with a hardball style. The group would be sold by 1991.

Stone would continue to work for Republicans Bob Dole and Tom Kean. According to the New Yorker magazine, Stone has also worked as a lobbyist and adviser for Donald Trump when he announced his intention to run for president in 2000. Roger Stone and Trump had a close relationship since then.

He has written seven Roger Stone books, all of which are published by Skyhorse Publishing in New York City. His works have been described by the Miami Herald and the Tampa Bay Times as “hatchet jobs”. His books are:

Since 2010, Stone has also been a contributor to The Daily Caller, a conservative website, writing as a “male fashion editor”. Stone also has his own fashion Roger Stone blog called Stone on Style.

Roger Stone’s ex wife was Anne Wesche, a fellow Connecticut native and a graduate of George Washington University. They first met in the university and are both members of the Young Republicans club. They married in 1974 and divorced in 1990. Stone’s current wife is Nydia Bertran, whom he met at one of the events in the Reagan campaign. Bertran had been working as a photographer at the party at the time.

Stone received a spotlight in the media during his time as an adviser in Donald Trump’s 2016 presidential campaign. The high-profile political consultant and strategist would then be forced to resign amid rising controversies regarding the campaign. He would then work as an informal advisor in the sidelines and would later form a pro-Trump activist group to boost the president’s influence.

Stone has written seven published books so far. He has also been a contributor for the conservative website The Daily Caller and owns a fashion blog called Stone on Style which he writes himself. He’s been controversial thanks to Roger Stone’s twitter and Instagram posts.

Roger Stone’s estimated net worth is around $20 million.