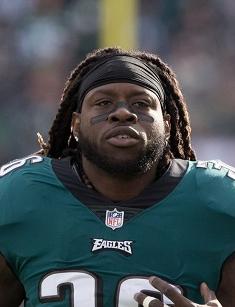 The London native, Jay Ajayi, started a football career in NFL in 2015 as a rookie of Miami Dolphins. He plays at a running back position. He was the 2016 Pro Bowl participant. A year later Ajayi won the Super Bowl LII as a player of Philadelphia Eagles. After 2018 season, Jay became a free agent because of his torn ACL. His net worth is roughly estimated at $2 million, including all of his properties and career earnings.

The birthplace of Jay was London. He was born to his dad, Ibi, and mom, Kemi, on June 15, 1993. Jay’s parents were born in Nigeria. Jay was the kid who could read the newspaper at the age of three. Jay grew up an avid football fan. His team of choice was Arsenal, as his dad wouldn’t let Jay or his brother live in the house if they weren’t Arsenal fans. So, Jay spent much of his youth watching Arsène Wenger's incredible sides of the early 2000s.

As a result, watching Thierry Henry at the peak of his powers, Ajayi became his fan. Henry was one of the biggest role models for Jay, which got him into playing sports. Living in England, Ajayi played soccer nearly every day, competing against neighborhood kids. When Jay was seven years old, his family moved to North Texas. And the boy entered the public high school located in the city of Frisco. He was a stellar student and a joyous spirit.

Jay was torn between focusing on football and soccer. The trend of playing soccer carried over even after the family’s relocation to the USA. It wasn’t until his junior year of high school when Jay was being run ragged from two different sports that his father sat him down and told him to pick.

Ibi told his son that he could be good at both of them, or he could be great at one. He asked Jay to choose which one he wanted to be great at. Although Jay’s dad was a licensed FIFA agent and had plenty of connections to pro teams in Europe, as well as the national team in Nigeria, Ajayi chose to focus on playing football.

Ajayi was named to the second-team all-state as a senior. He earned two varsity letters. Jay was recognized as the Collin County Player of the Year and reached the first team of the county. He scored 225 carries for 2240 rushing yards and 35 touchdowns as a senior. In his last year, Jay improved his stats, recording 209 carries for 1627 rushing yards and 20 touchdowns.

In 2011 Jay joined the Boise State Bronco of BSU. However, he was redshirted because of the arrest. In October, a promising freshman running back was arrested for trying to steal several pairs of sweatpants from a Boise-area Wal-Mart. Ajayi said it was a dumb mistake. His dad called it much more:

“It was an issue that was out of character because he had never done anything like that in his life. My wife and I believed that this was a spiritual attack. Something that was happening out of character to change his future.”

Bronco’s head coach Chris Petersen wanted to kick Ajayi off the team. Only after Ibi traveled to Boise and pleaded with the coaches to give Jay another shot, the player was allowed to stay, but only as a redshirt. Jay spent in jail five days and returned to the team motivated to earn back the trust of his teammates and coaches.

Ajayi had barely gotten back on the field when he went down in practice with a yell and a serious knee injury. His ACL was torn. Jay put on Bronco’s jersey again only in 2012 season. He recorded 82 rush attempts for 548 rushing yards, added four touchdowns and one reception. He appeared in 11 games.

Next season, Ajayi made 12 starts in 13 games, scored 249 rush attempts for 1425 yards, with 18 touchdowns and 22 receptions. In his junior season, Ajayi broke down his previous stats, recording 347 attempts for 1823 yards and making 28 touchdowns with 50 receptions. That season he led the Broncos to Fiesta Bowl. On December 21, 2014, Jay Ajayi announced that he was going to skip his senior season and enter the 2015 NFL draft. ESPN, Rivals, and Scout ranked him fourth in the nation.

The results of the NFL Combine showed that Ajayi wouldn’t be drafted in the first Draft rounds. As expected, on May 2, 2015, Miami Dolphins selected him only with the 149th number. Five days later the sides signed a four-year $2.5 million deal. On the eve of the beginning of NFL season, Jay got injured and missed eight weeks. He debuted only on November 8, in a game against Buffalo Bills. In his rookie season, Ajayi appeared only in nine games, all of them from the bench. He recorded 49 rush attempts for 187 yards and one touchdown.

Although the beginning of the 2016 season turned out to be blurry for Ajayi, it became the most successful of his career. In the first game weeks, he changed the role of a reserve and starting player several times, because of the team’s roster frequent changes. Jay entered his name in the NFL Record book, repeating his college record and rushing 200+ yards in three games in a single season.

In addition to good stats, that outstanding record allowed Jay to be named to Pro Bowl game. He spent 15 games in that season and made 12 starts. Next year the English player started very bad. His weak game led to his trade to Philadelphia Eagles after seven games. It didn’t take long for running back to show why the Eagles made a move to acquire him from the Dolphins before the trade’s deadline.

Ajayi gave the Eagles a nice accent and saw action in the first half and then put an exclamation mark on the team’s work in the first 30 minutes with a 46-yard run that saw him go airborne to get into the end zone. The touchdown made the score 31-9 Eagles at halftime of what would wind up as a 51-23 win and represented the biggest of Ajayi’s eight carries for 77 yards. After the game, Ajayi called the atmosphere in Philly “electric” and sounded excited about playing behind the team’s offensive line.

The Eagles entered playoff games as the top-ranked team. Ajayi helped to lead a series of winning games and to reach the Super Bowl. Jay’s 57 rushing yards helped the Eagles to win their first title.

Following the victorious season Ajayi had to gain a foothold in the main team. He spent four games, before his college’s injury ruined his life again. Jay’s ACL was torn. In summer 2018 he became unsigned free agent, according to rotoworld.com.

In October 2019, Ajayi informed all teams that he had finished his recovery from ACL surgery and was ready for game action. Then 26-year old running back was searching for a new home given his talent and many teams’ lack of depth at the position. There was news that Ajayi could end up with Giants, Lions, Browns, or Packers, and he could be productive for fantasy in any one of those offenses.

Jay keeps his private life secret, and there is nothing known about his romantic relationships. However, he is active on social media, especially Twitter and Instagram.