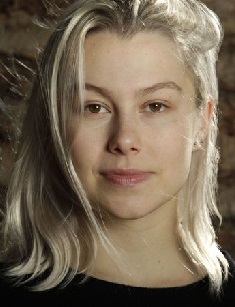 Phoebe Bridgers, a resident of Los Angeles, California, is a well-known folk-rock musician. Her fame has made her stood in the lane of artists like Julien Baker, Julia Jacklin and Conor Oberst. She is popular for her dreamy attire, haunting lyrics, indie pop heart and powerful voice. Phoebe Bridgers and Ryan Adams joined hands to release her debut song “7’’ Killer” in 2015 under Pax AM label. In 2017, her three songs “Funeral”, “Motion Sickness” and “Smoke Signals” created quite a stir in audience.

During 2017, she signed the contract with “Dead Oceans” and released her debut album “Stranger in the Alps” in September. She got critical acclaim for her second album titled “Boygenius” (2018). This album was formed in collaboration with famous songwriters like Lucy Dacus and Julien Baker. She is a graduate from Los Angeles County High School for the Arts. She is bisexual.

Phoebe Bridgers’s birthday is on 17th August. She was born in year 1994. This famous pop singer is a Californian rock star. She studied vocal jazz during her graduation degree from Los Angeles County High School for the Arts. Her mother name was Jamie Bridgers, who used to work as a house manager for fine arts complex in night shift at University of California, Irvine.

She used to take Phoebe along with her at job. At that time Phoebe was only 8 months old. She practically grew up seeing microphones, chair organizers, piano tuning and all the stuff happening in auditorium. According to her mother she loved every bit of it and was fascinated by musical instruments.

Her father used to work for television and movie industry as a set carpenter. She has a younger brother named Jackson who she spent her childhood with. She grew up while listening to artists like Hank Williams, Neil Young, the Pretenders and Joni Mitchell. At the age of 11, her first guitar was gifted by a family friend named “Dave”. She used to learn and play different songs on this Spartan acoustic guitar and on a piano that she owned too. Phoebe once said in an interview:

“I don’t remember making a decision about music. I just always knew it was what I was going to do.”

Phoebe Bridgers high school name was Los Angeles County High School for the Performing Arts. It has produced brilliant performers like Haim, Kehinde Wiley and Zoey Deutch. Due to her interest in music her majors in graduation was vocal Jazz. She got lucky to meet Ryan Adams through a common friend during her senior year. At that time she had started performing at various locations on her own. Ryan was impressed by her demeanor and was quick enough to invite her to his own studio within twelve hours of their first encounter. In 2015, he produced her first single “Killer” under his banner.

Phoebe Bridgers’s discography started with her first single “ 7’’ Killer ” which came out in 2015. This debutant album was produced by PAX AM, a label by Ryan Adams. The following year, Phoebe joined Julien Baker for her 2016th East Coast tour. In year 2017, she sealed the deal with “Dead Oceans” label. Her first album came under this banner by Tony Berg and Ethan Gruska on 22nd September, 2017. The album was named “Stranger in the Alps” and was considered a hit.

One of the online social platforms called Pebbal announced “Stranger in the Alps” as the best album of year 2017th on 12th March, 2018. In the same month Bridgers performed her songs “Motion Sickness” and “Scott Street” on the show “This Morning: Saturday” by CBS.

The group formed from Phoebe Bridgers collaboration with Lucy Dacus and Julien Baker was founded in year 2018. The trio named this supergroup “boygenius”. Phoebe had performing experience with Julien Baker as they had already done number of concerts together. Before the official announcement of a tour and an EP by the band, 3 singles were out in public during August 2018. The album was named “boygenius” as well and it was released on 26th October, 2018.

Two of the Phoebe Bridger’s song made their way into season 3 of a family show named “Switched at Birth”. First song titled “Safe at Home” was featured in the 5th episode and the second song titled “Ask Me To Steamroller” was made part of the 17th episode of the show which was aired on the famous ABC channel.

Meanwhile, her other song “Georgia” was chosen for the 2nd episode of season 8 of the well-known ABC show titled “Castle”. Season 1 of the “Burden of Truth” series had her song “Smoke Signals” in the 7th episode. Last but not the least, her popular song “Funeral” appeared in 2nd episode of season 3 of the show called “Lethal Weapon.” The show was aired by channel FOX. She was featured in the remake version of the song “The Night We Met” by Lord Huron for the 2nd season of controversial Netflix TV series “13 Reasons Why.”

Recently in January 2019, Phoebe Bridgers band “Better Oblivion Community Center” released eponymous debut album along with her band member Conor Oberst. On 26th January, 2019, the band performed “Didn’t Know What I Was in For”, “Dylan Thomas” and “My City” on “This Morning Saturday” show by CBS channel.

Aside from having many of her songs features in famous TV shows, it seems that Bridgers still have to work harder to compete with other singers in the industry as far as having an award is concerned.

Phoebe Bridgers’s dating life is quite controversial due to her allegation against Ryan Adams for making her go through emotional abuse. She is known to be sarcastic because of her dry one liners. Her music is usually based on dark themes, obsessions, heartbreaking scenarios and unpredictability of life.

Her album “Stranger in the Alps” is over all a sad record but still it contains witty pointers and literary mentions that show her outrageous sarcastic side as well. In her own words she described her album as

“It is a record I have been waiting to put out since I started playing music. It feels like I have not told the universe what I am yet.”

Phoebe Bridgers’s emotional ’’Motion Sickness’’ song has made quite an impression of her as a talented Indie pop singer. Her net worth is believed to be around $100,000 to $1 million.