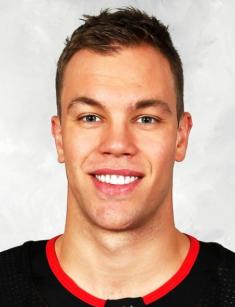 Taylor Hall is a professional ice hockey player. After performing for New Jersey Devils, Taylor was traded to the Arizona Coyotes in 2019. His career is full of fantastic moments and the player is the owner of numerous awards that he received for his skillful playing and hard work.

The sportsman was born in Canada. He doesn't have siblings. Speaking of his parents, his father was a popular football player who also was a member of the national bobsleigh team. His father was named “soon to be Hall of Famer,” and he was a great example for his son. Taylor became involved in hockey when he was five years old. His father knew that the boy had a passion for this game and built a rink in the backyard for him. Taylor and his friends spent a lot of time there. He was very thankful to his parents for support and help in his childhood. He said, although his father was a football player, he never tried to convince Taylor to play football too. Taylor entered high school in 2005.

Taylor's family changed their location and moved to Kingston, Ontario. The young player continued his training and studies there. He got his first award after performing in a Bantam AAA Calgary city championship and the ODMHA league. After the season, Hall was the second overall choice in the 2007 Ontario Hockey League Priority Selection by the Windsor Spitfires.

As junior, Taylor debuted during the 2007-2008 season. The sportsman was in great shape and amazed everyone with his hard work and devotion to hockey. For his results, Taylor was named OHL Player of the Week twice.

When the 2008–2009 season started, the player performed in the ADT Canada-Russia Challenge. It was a very productive season for the team. Taylor received the Wayne Gretzky 99 Award for his high scores in games.

After that, the sportsman appeared at the 2009 Memorial Cup and was named the tournament's most valuable player and got an award. In 2009 the player continued to show fantastic scores. He was among the favorites and joined the KHL Draft. Many professional sportsmen praised him for his talents. A year later, in 2010, the sportsman contributed to the win of the Spitfires in the Memorial Cup.

Hall was ranked as the top North American-based prospect by the NHL Central Scouting Bureau in its 2009–2010 midterm rankings.

In 2010, the player became a member of the team Edmonton Oilers. It was his first professional contract. Moreover, speaking of his salary, it was the second-most profitable rookie contract in the team's history. The sportsman debuted in October, in the victory against the Calgary Flames.

Hall was named to the 2011 NHL All-Star Game as a rookie. He came in second place to Michael Grabner in the fastest skater SuperSkills Competition.

The sportsman had his first career NHL hat-trick in a match against the Atlanta Thrashers in February 2011. The same year, Taylor suffered an injury in a goal against the Columbus Blue Jackets. He got another trauma in 2012 when he was cut by teammate Corey Potter's skate before a game against the Columbus Blue Jackets. The injury was so severe, that the sportsman had an operation on his face. After some time, he had one more surgery on his shoulder. Taylor didn't appear in the field for almost half a year.

At the start of the 2011–2012 season, Taylor was offered a new seven-year contract with the Oilers. The player had successful games and in March he set a record in a game against the Vancouver Canucks. In 2016, the sportsman was named to his first NHL All-Star Game.

In June, the player was traded to the New Jersey Devils. After several successful games, Taylor injured his knee. It took him a little time to recover and he was back after a week.

Taylor performed well during the 2017–2018 season, setting a record in a win over the Carolina Hurricanes. The sportsman was on top among the other players who finished the regular season. In April, the player was nominated for the Ted Lindsay Award as the NHL's most outstanding player.

Then, Hall was named an alternate captain for the Devils. In December 2018, he suffered an injury during practice and missed two games. After returning to the lineup, he recorded his 200th NHL goal in a match against the Columbus Blue Jackets on December 20. Despite these injuries, Taylor was selected for his fourth consecutive All-Star Game but was later replaced by teammate Kyle Palmieri because he wasn’t in a good health condition.

The sportsman didn’t appear for the rest of the season. After returning in pre-season games, he recorded a goal and an assist in a 4–2 win over the New York Rangers.

In the final year of his contract, were trade rumors about Taylor. The 28-year-old was expected to test being a free agent, where he could command up to $10 million per year on a long-term deal. Shortly after, trade talks intensified and the Devils pulled Hall from the lineup minutes before their game against the Colorado Avalanche. There were discussions that Taylor would join the Colorado Avalanche. In December 2019, the player was traded by the Devils to another team: the Arizona Coyotes. The general manager of the team said that according to him Hall is one of the elite talents in the game. He named him a Hart Trophy winner, a player with high career stats and one of the NHL’s most talented forwards.

The sportsman became extremely popular on the international level as well. He performed for Canada at the 2008 IIHF World U18 Championships in Kazan, Russia. With his score results, Taylor was fifth contributing Canada to win a gold medal.

In 2010, the player participated in the 2010 World Junior Championships in Saskatchewan. Taylor had a hat-trick against Slovakia in a game Canada won 8–2. Hall finished the tournament tied for third overall in scoring.

The sportsman has a Twitter account with over 500,000 followers. He also is active on Instagram, where he posts more from his personal life. There are photos of his girlfriend Rachel Rush; they have romantic relationships.

Apart from love life, Taylor also has a good relationship with his friends and family. He is an adventurous person: the player posts many pictures from his trips. There is a picture on Instagram, in which he is reaching the top of the mountain, Pilatus Luzern in Switzerland.

Taylor Hall has an estimated net worth of $25 million, generated from his professional career. Apart from his playing earnings, he earns additional cash from different endorsement deals, promoting the products of renowned brands. Taylor Hall's bobbleheads are very popular among the other products that his fans can buy.