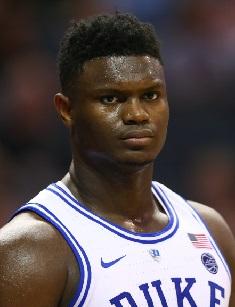 Zion Lateef Williamson is the current most renowned college basketball player. He’s been dominating the basketball stage since high school and now as the Duke Blue Devils forward. Zion Williamson’s weight is 285 pounds while his height is 6 ft 7 in. He is considered as a big man but one of the most athletic in the league.

Born on July 6, 2000, in Salisbury, North Carolina, Zion Williamson’s age is now 19. He was a well-known basketball player in their area. He's been ranked as part of the top five players of the 2018 class. At a young age, he already received countless awards such as South Carolina Mr. Basketball, McDonald's All-American, USA Today All-USA first team. He also brought three straight championships for his high school team.

Zion Williamson’s high school achievements earned him a spot in Duke. During his first season with the Blue Devils, Williamson was already named as the ACC Player of the Year and ACC Rookie of the Year. He also holds the scoring record set in a game by a freshman. He immediately grabbed the attention of the media and the NBA recruits. Based on the opinion of sports analysts, Williamson is expected to be the first overall pick of the 2019 NBA draft if he wishes to join the NBA.

Zion Williamson’s parents took part in his growth and development as an athlete. Basketball was not the first sport he played. He first played soccer and football. Williamson started dreaming about becoming a college basketball star at the age of five. At the age of nine, he formally started his training. His stepfather, a former college basketball player Lee Anderson, helped him improve his skills.

Williamson started competing in youth leagues where he played against players who were four years older than him. In his middle school, he joined the Johnakin Middle School Basketball Team in Marion, South Carolina where he averaged 20 points per game. He was able to bring the championship trophy for his middle school team. His mother, Sharonda Sampson, was the one who coached Williamson’s team in youth games and middle school tournaments.

Williamson formally started his basketball career when he joined the Duke Blue Devils. He was expected to carry the team to victory after his amazing performances in high school. On his debut game, he scored 29 points while grabbing 13 rebounds. He led his team to a win over the University of Ryerson. On his regular season debut, he scored 28 points in 23 minutes and led his team for a win against Kentucky. He then created a record for being the second player to score at least 25 points, 15 rebounds, and 5 blocks after he scored 27 points, 16 rebounds, and 5 blocks in a 94-72 victory against Army.

Williamson’s early dominance captured the attention of the basketball legends as he became one of the watch lists for Karl Malone Award, Naismith Trophy, and John R. Wooden Award. He was also hailed as player and freshman of the year in the Atlantic Coast Conference.

Known for his incredible dunks and agility, he became popular as Zion Williamson highlights monster. Every game he played was always filled with creative dunks, monstrous rebounds, and dominating blocks. He once performed a 360-degree dunk against Clemenson. Williamson and R.J. Barrett were a perfect winning combination for their team.

On January 7, 2019, Williamson earned his second ACC Freshman of the Week award. On the day after that, he finished the game against Wake Forest with a double-double performance 30 points and 10 rebounds. He experienced his first loss against Syracuse. Although it was huge overtime upset, Williamson finished the game with a strong performance by erupting to 35 points, 10 rebounds, and 4 blocks. This performance by Williamson broke the record of Marvin Bagley III and J.J. Redick for most points made by a freshman in a single game. After that game, he again received the ACC Freshman of the Week award for the third time.

Williamson scored nine 25-points games. This scoring run by Williamson was the longest 25-points run by a freshman. Two days after their St. John’s game on February 16, 2019, he was named as the ACC Freshman of the Week again for the fourth time.

On February 2018, Williamson suffered his first major injury. During their game against North Carolina, he suffered a Grade 1 sprain where his foot ripped through his shoe. Everyone thought the injury would destroy Williamson’s career because of how the injury looks. Due to what happened to his shoe, his shoe manufacturer, Nike, suffered a huge stock market drop. That single incident cost them approximately $1.1 billion drops in value. That same incident led to some sports analyst saying that Williamson should leave college basketball and start playing in the NBA.

Williamson comes back from injury to play for the 2019 NCAA Tournament. The media was very hyped for his performance in the NCAA, they even placed a camera called “Zion Cam” which records Williamson’s movement throughout the tournament. Williamson broke different records during the tournament. He finished with 32 points, 11 rebounds, and 4 assists in a win against UCF. His performance was the first time in school history for a player to record at least 25 points, 10 rebounds, and 4 assists in the NCAA. Sadly, their NCAA journey ended after they lost against the Michigan State.

During the duration of the NCAA tournament, Williamson averaged 22.6 points, 8.9 rebounds, 2.1 steals, and 1.8 blocks while shooting a whopping 68 percent from the field. He was also one of the three players who ended their freshman career in the NCAA with 500 points, 50 steals, and 50 blocks. Zion Williamson’s stats proved that he is eligible for the 2019 NBA Draft.

Aside from the awards he received from the ACC and the Sporting News, he was also hailed as the 2019 Naismith Men’s College Player of the Year and the 2019 John R. Wooden Award.

Born in Salisbury, North Carolina, Williamson grew up knowing the sport played by his father, football. His father, Lateef Williamson, was a football defensive lineman for the Mayo High School in Darlington, South Carolina. His father was designated as part of the 1993 High School All-American.

On the other hand, his mother, Sharonda Sampson, was a sprinter at Livingstone and became a P.E. teacher. At the age of five, his parents got divorced and his mother married to Lee Anderson. His stepfather and his mother were the ones overseeing his training. Williamson’s younger brother, Noah, is currently in his junior year.

Since he is currently a University player, he was not able to sign major contracts involving millions. Zion Williamson’s net worth is still unknown. What is known about his net worth is only that he earns at least $45,000 with his team, Duke Blue Devils.