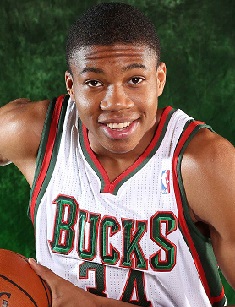 Giannis Antetokounmpo who was born on the 6th of December, 1994 is a professional Basketball player who is known as the Greek Freak. He is 7 feet tall and has a muscular frame and plays for the Milwaukee Bucks of the National Basketball Association. He has received the name of Geek Freak because of his birthplace which is Greece.

He has received a lot of awards during his basketball career and is still is one of the best players in the Milwaukee Bucks received the Most Improved Player in 2017.

Giannis Antetokounmpo’s father along with his sons hawked items such as bags, sunglasses, and watches. Two of Giannis Antetokounmpo’s brothers are also basketball players and are playing professionally. His elder brother plays with the Panathinaikos’s team in the Greek Basketball League, and his younger brother plays for the Dallas Mavericks of the NBA. His name is Kostas Antetokounmpo. His youngest brother Alexis still studies at high school and plays Basketball in his school in the US. He is also preparing to set foot in the NBA just like his elder brothers.

Giannis Antetokounmpo age was around 18 years when he started his professional basketball career. He began with the Greece A2 League in the 2012-13 seasons. Soon he was able to score a four-year deal with CAI Zaragoza which was a Spanish Club. Big European clubs such as Barcelona were also interested in taking him. During his Greek A2 League, he was selected by the coaches to become an individual participant in the Greek All-Star Games 2013.

In April 2013, Giannis Antetokounmpo became eligible for the 2013 NBA Draft and was selected by Milwaukee Bucks. He signed his rookie scale contract with the club and played for the 2012-14 season. He was one of the names in the NBA All-rookie second team for the season.

In the 2014-15 season, he recorded the highest career points of 27 points and 15 rebounds. He was also named the Eastern Conference Player of the Week during the games. Later on March 9, he broke his own record and scored 29 points. Ever since then, his career has been on an all-time high, and he has been still playing for the Bucks. He was named the Greek Freak for his ball handling skills and his athleticism. Giannis Antetokounmpo agent is Alex Saratsis, and his agency is Octagon.

Here is a list of some interesting facts about Giannis Antetokounmpo:

Giannis Antetokounmpo’s dating life has been as amazing as his career in Basketball. He has been dating a woman named Mariah Riddlesprigger. She was a volleyball player at Rice University. She graduated in 2014 and then interned at the National Basketball Association for the next two years.

This is where the couple met, and they have been dating for some time now. They are often seen together going on vacations or going on dates. Both of them live in Milwaukee, and hence it is pretty easy to see them together. Currently, there have been no rumors regarding their breakup, and the couple seems to be happy.

Earnings and Net Worth

Looking at the Giannis Antetokounmpo’s career stats his earnings are have increased to over 500% in the past few years. This can also be because of the contract with Nike, which pays him about $20000 annually. He has dealt with other big brands such as Tissot, BMO Harris, Kronos Foods and other brands in his own country. He was also one of the world’s highest-paid athletes in 2018.

Giannis Antetokounmpo’s cars are among his interests, and he owns a lot of luxury as well as sports cars. His primary source of income is his salaries plus the endorsement deals that he does with the various brands. As of 2019, his net worth can be estimated around $40 million. It will only be increasing in the few years to come.