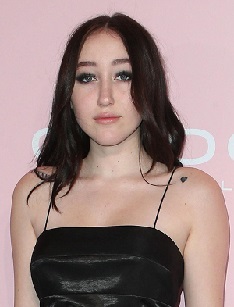 Noah Cyrus is a famous actress and Singer from U.S.A. She released her first song named “Make Me (Cry)” on 15 November, 2016. The song made her rose to fame on the international music market. Her first album came out in 2017. The album was titled as “NC-17”. Their family is filled with talented musicians. Noah Cyrus’ dad Billy Ray Cyrus and her sister Miley Cyrus are popular musical figures worldwide. She is the youngest female child of the Cyrus Family.

Noah joined the entertainment industry at a very young age of 3. Her debut performance was a recurring role in the T.V. show named “Doc”. During 2008 she got the opportunity to work for a Japanese animated film titled “Ponyo” in a child voice over act. The film also put her singing abilities in the limelight.

She is respected for her philanthropic activities and is an active campaigner for PETA. She believes that animal dissections should not be a part of high school curriculum. Her song “Chasing Colors” came out on April 14, 2017 and gained the notable 31st spot on the US Dance/Electronic Songs Billboard 2017 Music Chart. “Chasing Colors” is the result of Noah Cyrus’ teamwork with electronic DJs Ookay and Marshmello.

Noah Cyrus’s birthday is on 8th January. She was born in 2000 in Nashville, Tennessee, U.S.A. Her multi-talented father is a well-known country singer, actor and song writer named Billy Ray Cyrus. Her mother’s name is Leticia Cyrus who is generally referred as Tish. Leticia is the second wife of Billy Cyrus. Her real siblings are Miley Cyrus and Braison Cyrus. She got one half sibling brother from her father side named Christopher and two half siblings from her mother whose names are Chris and Brandi.

She belongs to a catholic family and was upraised as a regular church going person. Since childhood she has been witnessing her famous musical family playing in live shows and televisions. This made her more eager to join the music industry and she started taking music lessons. Her first Television debut project was offered to her at the age of 3.

Cyrus’s first job on TV was to act in a role of Gracie Herbert for the 6th episode of the show called Doc. She is one of the background dancers featured in picture Hannah Monatana: the Movie (2009). She portrayed minor roles in 6 episodes of Original television series “Hannah Montana” by Disney Channel. She made her appearance noted as Trick in straight to DVD movie called Mostly Ghostly. She voiced over a character in 2018 for an animated Japanese production titled Ponyo. She lent her voice to the lead character of the film. She and Frankie Jonas collaborated to sing Ponyo’s theme song in English language.

From 2009- 2010, Noah along with Emily Grace Reaves, did a web-show called The Noie and Ems Show. She signed a contract with Records that was run by Barry Weiss and for managing her career she opted for Maverick house. The announcement of both deals was made on 15th November, 2016. Noah Cyrus’s first song Make me (Cry) featuring Labrinth went on air on November 15, 2016. Her acoustic performance of the song “Almost Famous” came out in December, 2016. During February 2017, her collaboration song with electronic music DJs Marshmello and Ookay named “Chasing colors” was released.

In addition, three other songs by Cyrus came out that year namely “Again featuring XXXTentacion,” “Stay Together”, and “I’m Stuck”. She joined Katy Perry’s Tour “The Witness” as a tour opener from 19th September, 2017 to 1st November,2017. Her partnership with her brother Trace Cyrus as DJs also happened in November 2017 at Emo Nite in Los Angeles. Also in November, her other collaboration song with electronic band “One bit” got released. The song was titled “My Way.”

On Feburary 7th, 2018, her song “We Are…” (feat. MØ) came out. Her song “Team”, collaboration with MAX, went on air on 11th May, 2018. Another collaboration song that was released in 2018 was “Lately” with Tanner Alexander. Official announcement of Noah Cyrus Good Cry tour was made on 9th july, 2018. She worked with Lil Xan for the song “Live or Die”. The song came out on 20th August, 2018. Another international DJ Matoma featured Noah in the song “Slow” which was included in Matoma’s second album named “One in a Million.”

Noah Cyrus’s album “Good Cry” was released on 21st September, 2018. Noah Cyrus has also ventured into merchandizing by joining hands with brand “Pizzaslime”. The stock that was available for only 48 hours included hoodies, sweatpants and ‘Noah Tears’ in a jar box. As an activist she has raised voice for banning horse usage in carriages, excluding animal dissection in High school and for SeaWorld boycott.

Noah Cyrus discography has made her attain many nominations on various award events. In 2017, she got two nominations at “Radio Disney Music Awards” in the categories including Best New Artist and Best Breakup Song for her debut single “Make me (Cry).” Make me (Cry) song was ranked as Gold and Platinum by “Recording Industry Association of America” (RIAA) and both “GLF and Music Canada” respectively.

Noah Cyrus earned the nomination at “Kids Choice Awards USA” for Blimp Award Favorite Breakout Artist in 2018. In the same year she was also nominated twice at “MTV Video Music Awards” for the categories Push Artist of the year and Best New Artist.

Noah Cyrus believes in keeping her personal life private from the media. Once she told “Schon Magazine” that her debut album mostly consists of those songs that helped her deal with a breakup. Noah Cyrus and Lil Xan were rumored to be dating during June to September 2018.

Her love for farm animals is evident from the fundraising campaign she did for banning horse-drawn carriages on her 13th birthday. She also raised her voice against animal dissections in high school through non-profit organization PETA.

Like many successful musicians, she has earned quite a lot of money as a professional singer. It is believed that Noah Cyrus’s net worth in current year 2019 is approximately $3 million.