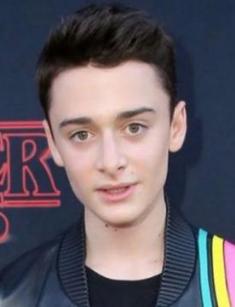 In 2016, Netflix launched the TV series Stranger Things, which won the hearts of millions of TV viewers around the world in a matter of months. The cast has received the Golden Globe Awards, the Emmy Awards, as well as the BAFTA Awards, although it mainly consists of children. For example, Noah Schnapp has not graduated from school yet, but he is already considered one of the most famous child actors.

Noah Cameron Schnapp was born on October 3, 2004, in Scarsdale, New York. He is four minutes older than his twin sister, Chloe Schnapp. The children do not look alike, and Noah has explained on Instagram that they are fraternal twins. It means that they do not share a lot of similarities. Their zodiac sign is Libra.

Parents Mitchell and Karine Schnapp are Jewish immigrants who moved to the United States from Montreal. That is why the boy has Canadian citizenship, Moroccan and Russian ancestry. Noah is an American Jew.

Schnapp became interested in acting in early childhood. The boy was four years old when he saw the Broadway production of Annie. Since then, the future actor has always been passionate about the stage.

Noah showed talent in school plays. One day an acting teacher asked the boy if he wanted to become a professional actor. 8-year-old Schnapp agreed without hesitation.

The parents supported the aspirations of their son. They enrolled Noah in an acting program at Westchester's Star Kidz. Soon Alyson Isbrandtsen, the founder of the studio, and the man who discovered dozens of young talents referred Schnapp to MKS&D Talent Management for career opportunities.

Noah Schnapp began his acting career, voicing the title character, Charlie Brown, in the animated film The Peanuts Movie (2015). The same year, Steven Spielberg released the thriller Bridge of Spies with Tom Hanks about lawyer James Donovan, who during the Cold War was to negotiate the release of an American pilot from captivity in the USSR. Schnapp played the role of James Donovan's son, Roger.

Noah Schnapp’s main project is the TV series Stranger Things. The actor plays Will Byers, the youngest son of Joyce Byers (Winona Ryder). For the first time, his character appeared in the first season and was immediately at the center of things.

The guys face the monster Demogorgon. Whether they win the opponent or not depends on Will who rolls the dice. The game is interrupted by Mike's mother, and friends do not have time to find out their fate. Later, the boys understand that they have got fewer points, and Demogorgon defeated Will. On the way home, the monster abducts Will into the other world. The first season is devoted to the search for the boy.

The investigations of police and Will’s friends stop after his return to the real world. Eleven (Millie Bobby Brown), a girl with psychokinetic abilities, has played a vital role in saving the boy. In the end, he managed to defeat Demogorgon, but he began to see dreams about "the Upside Down," an alternate dimension.

Although Will Byers is the title character, in the first season of Stranger Things, Noah Schnapp got only a recurring role. The boy earned $ 10,000 for each episode. The actor was promoted to series regular for the second season, and his income increased to $ 250,000.

Noah admitted in an interview with The Hollywood Reporter that it was not easy to film in the second season. His character was almost eaten by Demogorgon and then was overwhelmed by the Shadow Monster. The actor had to watch a lot of demonic possession films, including The Exorcist (1973), to prepare for a role. Schnapp's efforts were not in vain. In 2018 he won the MTV Movie & TV Award for Best Frightened Performance.

By the way, Panic! At The Disco took advantage of the actor’s ability to excellently depict convulsions. In 2016, the group released a music video for the song "LA Devotee," in which Schnapp played a significant role.

The third season of Stranger Things premiered on July 4, 2019. The action takes place in the summer of 1985. To feel the atmosphere that prevailed at that time, Schnapp watched Back to the Future (1985) and consulted with Winona Ryder, a 1980s icon.

It is too early to talk about the personal life of Noah Schnapp. He is too young for relationships. Besides, the actor does not have free time shooting in several films at once. However, the young man admitted in an interview with the WIRED YouTube channel that he was in love with Zendaya, the actress who played Peter Parker's girlfriend in the fantasy action movie Spider-Man: Far From Home (2019).

Schnapp has a close relationship with Millie Bobby Brown. For a long time, the tabloids called the actress his girlfriend, but they are only friends.

Schnapp has only begun his career, and there are a great many projects ahead. Now two films with his participation go through the post-production stage. These are Abe about the culinary genius, Abraham, and the historical drama Waiting for Anya.

As of March 2019, the movie Waiting for Anya has already been shot. It shows the events during the Second World War. Noah has portrayed Jo Lalande, a young shepherd whose childhood ends when his father goes to war. One day, Jo meets a man named Benjamin. He is a Jew who helps his comrades escape Nazis persecution and come to Spain. Jo starts helping Benjamin.

Noah Schnapp has a net worth of about $1 million.