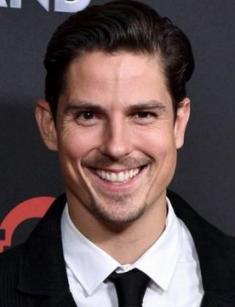 The American actor and model Sean Faris bears much resemblance to young Tom Cruise. Although he has no movies like Mission: Impossible in his filmography, the audience knows him for dozens of bright projects, such as Pretty Little Liars, Supernatural, and The Vampire Diaries.

Sean Hardy Faris was born on March 25, 1982, in Houston, Texas. The parents, Katherine Miller and Warren Stephen Faris, had English, German, Scottish, and Irish roots and belonged to the working class; they could hardly afford a small house.

Little Sean was a charming child; he was popular among girls and boys, smiled, and made faces in front of a mirror. This behavior gave the parents the idea that their son could become a model. In 1994, the family moved to Cleveland, Ohio, where Sean entered the famous Barbizon Modeling and Acting School.

Five years of fashion shows and glossy magazine photo shoots were well worth the endeavor: in 1999, he was named Male Model of the Year at the International Model and Talent Association. The next year, the young man finished the Catholic Padua Franciscan school. To escape from the image of a cover boy, Faris moved to Los Angeles to try himself as an actor.

Because of Sean’s good-looking appearance, he did not receive much attention at first. In 2001, the artist appeared in three projects. One of them was the fourth season of the series The Faculty about high-school students looking for partners and spending time on promiscuity.

The American horror The Brotherhood II gave the artist a significant role: nerdy John who received power, money, and girls’ admiration thanks to black magic. While two of his friends carelessly enjoy their new lives, John realizes that their coursemate Luc who involved them into this affair is an evil magician.

Later on, Sean contributed to the historical drama Pearl Harbor based on a true story. He played a minor part of a gunner but shared the movie set with Ben Affleck, Alec Baldwin, and Kate Beckinsale.

2002 brought four series: Even Stevens, House Blend, Smallville, and One Tree Hill. All these roles were episodic and did not show the actor’s talent to its fullest. Sean kept looking for such an opportunity for two long years until he was invited to the series Life as We Know It starring Kelly Osbourne, the daughter of the famous rock musician Ozzy Osbourne.

Another TV project about students followed: Reunion. As the story runs, a former Bedford school student is murdered at a reunion party. Six friends, including Sean’s character Craig, are the suspects. Each episode pictures each of the friends’ lives from the moment they graduated in 1986 until the murder in 2005.

In 2005, Faris stepped aside from the student theme and appeared in the movie Yours, Mine & Ours about two lovers of ripe ages. The woman has ten kids, and the man has eight; these large families are going to merge. Sean personified the eldest child in the family of the future husband.

In 2008, the world finally recognized Sean Faris thanks to the sports drama Never Back Down. The actor personified Jake Tyler, the football team captain and the favorite of girls and teachers. The young man is pretty hot-tempered and easily gets into fights. The family moves for the youngest son’s sports career, and the former school star becomes an outcast. He falls in love with beautiful Baja Miller (Amber Heard) and gets himself in trouble with the daredevil Ryan McCarthy (Cam Gigandet). Jake fails in the fight and, following his classmate’s recommendation, goes to a mixed martial arts coach. The young man’s practice is long and exhausting; finally, he learns how to concentrate his energy and improves his skills.

Never Back Down gave the actor the MTV Movie Award – Best Fight. The role of the goal-oriented and slightly aggressive character attracted thousands of fans. Their number increased after the movie Forever Strong about a rugby player who could be released from prison if he played for his opponents’ team. The final step to conquer fans’ hearts was a nude picture on the cover of Cosmopolitan; Sean Faris donated the money for patients with oncology.

The triumph of 2008 did not repeat itself for a long time. The actor participated in three episodes of The Vampire Diaries and personified the charming bartender Ben McKittrick. He also appeared in several movies, but critics did not notice them.

In 2011, the action movie Freerunner came out. It is the story about a parkour practice who has to run from one part of the city to another along with his friends; the one who reaches the destination first stays alive: every contestant has a bomb around their neck.

Three years later, Sean appeared in an episode of Supernatural: he played a werewolf, Julian Duval. The movie Gangster Land (2017) is the artist’s most recent work.

The media were speculating that Sean Faris was gay. However, in 2017, the artist married the actress Cherie Daly whom he had met at the movie set of Pretty Little Liars.

The actor regularly posts pictures with his beloved one on Instagram; the same photos appear on Twitter. Sean and Cherie often travel together and do extreme sports like skydiving and scuba diving. The man looks athletic; his height is 6 feet (183 cm.), and his weight is 158.73 lbs. (72 kg.). He has several tattoos: a wing on the left of his chest and written words on his forearms.

The drama The Bay House and the TV movie A Veterans Christmas are the artist’s recent projects. Besides, Barefoot Warriors starring the man is in post-production now.

Today, the actor works on The Story of Bonnie and Clyde where he is going to personify Clyde. The movie was scheduled for 2016, but there has been no news about it since then.