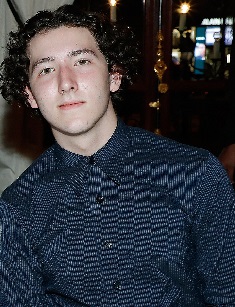 Frankie Jonas is a young actor and musician who became noticeable after appearing on TV series Jonas in 2009–2010 and in the film Ponyo on the Cliff by the Sea in 2008. Frankie is the youngest boy among The Jonas Brothers, and this connection made his way to fame a little easier.

However, it takes a lot of courage to make something on your own and try to stay away from the shadows of his more famous brothers.

Frankie Jonas was born in New Jersey in 2000. His parents are Denise and Paul Kevin Jonas Sr., and Frankie also has famous brothers, Kevin Jonas, Joe Jonas, and Nick Jonas. Little Jonas has the nicknames like "Bonus Jonas" and "Biff." Frankie's family is rather interesting: the boy has Italian, German, English, Irish, Scottish, and French-Canadian ancestry.

Frankie’s first appearance was in the music video When You Look Me in the Eyes (2008) with his brothers. Also that year, he starred in the TV series Jonas Brothers: Living the Dream. In 2009, Frankie voice acted the character Sōsuke in Hayao Miyazaki's animated film Ponyo. Another central personage was voiced by the singer Noah Cyrus, who also sings the theme Ponyo song together with Jonas. Jonas also had a minor role in Night at the Museum: Battle of the Smithsonian (2009).

In 2009–2010, Frankie appeared in the Jonas L.A., and for that, he won the Teen Choice Award in the category "Choice TV Breakout Star Male." His debut role in the on-screen movie was the role of Trevor in Camp Rock 2: The Final Jam (2010). Then, in 2012–2013, the actor also appeared on Married to Jonas, which showed the married life of Kevin Jonas and his wife, Danielle. In June 2019, the documentary Chasing Happiness got released. It is about the rise of the Jonas brothers' success.

For now, Frankie has a net worth of $500,000, which is very successful for such a young star. By the way, Frankie’s finances have almost the same amount as his Instagram followers (around 513,000).

Unlike other Jonas Brothers, Frankie did not sign any contract with Columbia records. In 2008, on their website, The Jonas Brothers stated that Frankie and his friend had their own band called "Drop/Slap." Sometimes it can be seen as Frankie is kind of left out of his brothers’ team. However, he just tries to make his own way in the entertainment world.

In 2018, Frankie and his family traveled to India because there was an engagement of Nick Jonas and his girlfriend, Priyanka Chopra, a model, and actress. Then, in December, Nick Jonas’s wedding took place in the Umaid Bhawan Palace.

Every Jonas brother has his own style. If we look at Frankie then and now, it can be seen how he grew up and became a real man. As a kid, he was looking a little bit shy, but now Frankie is self-confident as his elder brothers.