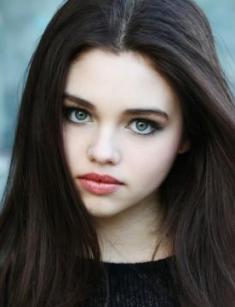 Despite her young age, India Eisley has appeared on TV screen many times, and millions of fans worldwide have had the opportunity to appreciate her talent.

The would-be actress was born into an artistic family on October 29, 1993, in Los Angeles. The girl’s mother, Olivia Hussey, was a British actress of the Argentinian origin, and her grandfather from the maternal side was a popular South African opera singer.

Olivia had the son Alexander in the first marriage; he became an actor. Her second son, Maximillian, was born from a Japanese father. The woman’s third marriage to the American rock musician and actor David Glen Eisley was marked with the birth of India. The child’s grandfather from the paternal line was also a famous actor.

The future celebrity was not a diligent student. The only time she enjoyed going to school was when her father took her there by bicycle.

Otherwise, India did not stand out for academic achievements or exemplary behavior. Cinematography was everything she was thinking about, considering that her parents were public persons. Olivia saw her daughter’s urge and helped her take the first steps in the movie industry.

India debuted in 2003 when Olivia Hussey was starring in the European biographical drama Mother Teresa of Calcutta. The girl appeared in a small episode, and she was not even credited. The premiere took place on October 19, 2003; the ten-year-old child made her final decision to become a professional actress.

Three years later, the 15-year-old artist earned her first popularity: she succeeded at the auditions for the part of Ashley Juergens in Brenda Hampton’s drama series The Secret Life of the American Teenager.

Who years later, when India was hanging out with her friends in a café, a British actress Kate Beckinsale noticed the young woman. Kate was preparing for the main part in Måns Mårlind and Björn Stein’s horror Underworld: Awakening; she was to personify a vampire Selene. The directors were looking for an actress to play Eve, Selene’s daughter. Beckinsale offered Eisley to audition, and the actress received her first role on her own, without her mother’s assistance. Theo James became her stage partner.

Six months later, Eisley received the role in the American fairy tale Maleficent starring Angelina Jolie. She was supposed to personify the main character in her youth, but the English actress Ella Purnell replaced her at the last moment for some reason.

However, 2014 was marked with three projects for Eisley. On June 13, 2014, the premiere of the American and Mexican action Kite took place; the story was based on Yasuomi Umetsu’s anime under the same title.

The artist played the protagonist, Sawa, whose parents died early. A cynical and cruel police officer becomes the girl’s caretaker; he makes her have sex with him. Later, Sawa learns that this man murdered her parents; she is determined to take revenge.

As soon as Eisley finished this work, she joined the cast of the comedy One Week in Hollywood and took the part of Jessica. Another 2014 movie was Nanny Cam where the actress personified Heather Lambert.

In 2015, India collaborated with her mother in Bruce Webb’s melodrama Social Suicide, the modern version of the Romeo-and-Juliet story. India and Olivia played Julia and Mrs. Coulson, the modern Capulet.

2016 was marked with four movies; the fantastic detective thriller The Curse of Sleeping Beauty was the most memorable one. India played the main character, Briar Rose.

The actress prefers to keep her personal life secret; whether she has a partner is not known for sure, even though India has posted several pictures with a young man on her Instagram. Eisley regularly shares new photos in social networks: going to a café with her friends and selfies with high-quality whiskey.

India Eisley’s net worth is estimated at $2 million in 2019.