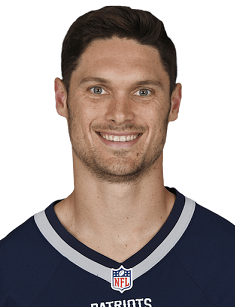 Christopher James Hogan is an American professional football player performing for the Carolina Panthers of the National Football League (NFL) on wide receiver position with a number 15 on a jersey. He started playing being a student at Monmouth University.

Chris joined the NFL as an undrafted free agent in 2011 but did not appear in a regular season game until 2012 as a member of the Buffalo Bills. Before entering the Bills, he was signed by the San Francisco 49ers, New York Giants, and Miami Dolphins.

During his tenure with the Dolphins, Hogan was featured prominently on the 2012 season of HBO's Hard Knocks after Reggie Bush nicknamed him "7-Eleven" because he was "always open."

So, let's know more about his way to success!

Chris' birthplace is Wyckoff, New Jersey - he was born there on October 24, 1987. There he studied at Ramapo High School. As a teenager, Hogan was interested both in football and lacrosse and took part in many local championships.

When it came to choosing a college to study at, in 2007, he entered Penn State on a scholarship to help build a rising Nittany Lions men's lacrosse program. In his freshman year, he performed in all 13 games as a starter and made 11 goals. The next year, Hogan got injured – he suffered a high ankle sprain and had to stop playing for some time. So, in total, he managed to take part in 3 matches as a sophomore. Being a junior, the sportsman registered 29 goals on 133 shots and was subsequently named first-team All-ECAC. In the last year, Hogan became a captain of the team.

Chris had one year of college sports eligibility remaining and decided to enter the Monmouth University – there he performed for the team Hawks on the quarterback, receiver, and cornerback positions. Totally, the player managed to record three touchdown passes, 12 receptions for 147 yards and three touchdowns on offense, and 28 tackles and three interceptions on defense. Hogan impressed everyone by his speed and strength. At his 2011 Pro Day, Hogan pumped 28 reps of 225 pounds on the bench press. Hundreds of receivers have participated in the NFL combine since 2011, and none has matched Hogan's total on the bench as of 2016.

In July 2011, he was hired by the San Francisco 49ers as a free agent. Later, he signed a contract with the New York Giants and got to the practice squad. In December Chris Hogan was signed to the Miami Dolphins' practice squad.

In 2012 Hogan joined the Buffalo Bills. In October 2013, fighting against the Cincinnati Bengals, the player made his first career reception. On October 12, 2014, in the match against the New England Patriots, Hogan recorded the first touchdown on an eight-yard pass from quarterback Kyle Orton. Generally, the season 2014 was successful for the sportsman: so, he registered 41 receptions for 426 yards and four touchdowns.

In the next season, Chris took part in all 16 games. In the winning match against the Miami Dolphins, he showed a first season touchdown. His best game was on a Monday Night Football - he faced the New England Patriots and caught 6 passes for 95 yards. Performing against the Tennessee Titans, Hogan threw his first career NFL pass. The season was closed with 36 receptions for a career-high 450 yards and two touchdowns.

In March 2016, the sportsman signed a four-year $12 million contract with The New England Patriots cause the team's head coach Bill Belichick noticed a massive potential in him.

In Week 1, Hogan's team faced the Arizona Cardinals. In this game, he made first season touchdown for the Patriots on a 37-yard pass. In Week 5, they performed against the Cleveland Browns. Hogan registered 114 receiving yards. The Week 8 happened to be successful for him - he caught four passes for 91 yards in the match with Buffalo Bills. In Week 14, on Monday Night Football, he found a 79-yard touchdown pass against the Baltimore Ravens, the longest of his career (and the seventh longest in the NFL through Week 14), part of another career-best 129 yards on five receptions. The season was closed with 38 receptions for 680 yards and 4 touchdowns. In 2017 Hogan's team took part in Super Bowl LI. – having defeated the Atlanta Falcons, they won with a score 34–28.

Chris started the new season with playing against the New Orleans Saints. In the match, he scored five receptions for 78 yards and also made a first season touchdown. On October 29, performing against the Los Angeles Chargers Hogan injured his right shoulder and had to miss a few games. He returned only in December. So, on December 11 Hogan made one reception for five yards, but the team lost to the Miami Dolphins with a score 27-20. The Patriots won the Tennessee Titans in the Divisional Round and Jacksonville Jaguars in the AFC Championship and got to the Super Bowl. Unfortunately, there they were beaten the Philadelphia Eagles with a score 41-33.

The season 2018 was not productive for Chris. He took part in all 16 games but was utilized less than in previous seasons. The sportsman had over five targets in just two games, zero receptions in four games, and failed to break 80 yards in any game. The Patriots got to the Super Bowl again, having beaten both the Los Angeles Chargers in the Divisional Round and Kansas City Chiefs in the AFC Championship. This time they won the competition – the team faced the Los Angeles Rams and defeated them with a score 13-3.

Hogan's current net worth is evaluated at $6 million. He gets a salary of $3 million.

In 2015, Maximum Human Performance (MHP) announced the signing of Chris Hogan to a sponsorship deal.

The sports site rotoworld.com has published the following Hogan's statistics:

Hogan met his future girlfriend and wife Ashley Boccio at Penn State where they were both lacrosse players. She played as a defensive standout. In his future admission, Hogan said Ashley had always supported him, helped make correct decisions, encouraged not to give up. He shared with journalists:

“We formed such a great relationship at Penn State, and she supported me through everything. There was never a doubt in her mind that I could do this, but she knew I had to work to get to where I am today. If there is anyone I could learn from her; it’s her.”

Interestingly, the couple has always competed with each other. So, when Ashley was named an All-American in 2009, Chris promised to top that accomplishment.

Having graduated from college, Ashley didn't stop playing but became involved in medicine and worked as a surgery resident in podiatric medicine at Long Island Medical Center in New York. The women wanted to become a doctor from the very childhood – being a kid, she saw her father-surgeon working and found it interesting.

Of course, Chris an Ashley have different schedules and sometimes it is difficult to find time for being together, but they both try to do their best to see each other as often as possible.

It’s a fine-tuned system the pair have perfected over the last few years, including everything from FaceTime dates and making sure Hogan can watch family nights while also discussing plans for after Boccio’s graduation. There’s plenty of chaos, but it’s a functional kind and, with another Super Bowl ahead of them, the family is more than ready to take on whatever comes next.

They became spouses in 2017 – the wedding took place at the Westmount Country Club in New Jersey. There even was an after-party. Chris’ brother, Jeff, was the best man.

The same year the pair announced that they weren’t just expecting their first child – they were expecting twins. And they even did it memorably, announcing the news on social media with

“Thought we were going for an extra point, I guess we went for two.”

In March Ashley gave birth Chase and Parker. The Hogan twins were part of a mini Patriots baby boom in 2017 as six different players welcomed seven new additions in the first few months of 2017.

Interestingly, Chris Hogan is a namesake for a millionaire, motivational speaker and author of the books “Retire Inspired” and “Everyday Millionaires” Chris Hogan. Many people know him for an interview with Dave Ramsey where he shared his thoughts about money and success.