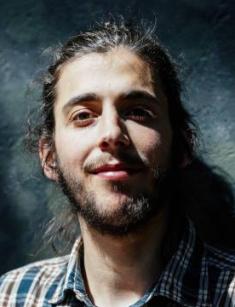 Salvador Sobral is a popular singer known for his victorious participation at the Eurovision Song Contest 2017.

Salvador Vilar Braamcamp Sobral was born on December 28, 1989, in the capital of Portugal; soon, the family moved to Barcelona, Spain. The boy’s father, Salvador Luís Cabral Braamcamp Sobral, came from an old noble family; for example, the Portuguese minister of the early 19th century Count Sobral was his ancestor. The mother’s name was Luísa Maria Cabral Posser Vilar. The would-be singer had an elder sister, Luísa Vilar Braamcamp Sobral.

It was evident from the boy’s first months that he had a congenital heart condition. Thus, everybody kept him from excessive physical activities and fast games. Salvador liked soccer, but he could only watch it at a stadium or home, in front of a TV set. As Sobral did not spend much time outdoors, he started practicing music and singing, following his sister’s example.

Besides, the young man liked psychology and considered entering a university to study it; he chose sports psychology. In 2009, Salvador made his dream come closer and entered The University of Lisbon.

Sobral participated in his first contest at the age of ten: he appeared in the TV show Bravo Bravíssimo broadcast on the Portuguese television. At 19, the young man joined the third season of Pop Idol. The program originated in 2002 in Great Britain; the producer Simon Fuller, who created the group Spice Girls, organized it. The Lisbon premiere took place three years later. Salvador’s sister Luísa participated in the first season and got the third place. Further on, it was the younger brother’s turn to try himself.

The young man chose several songs: "Sunday Morning”, “Crazy Little Thing Called Love”, “I'm Your Man”, “Heal the World”, and “Jura”. He behaved in a simple way and did not feel like becoming an idol. Salvador was wearing a worn jeans costume and a modest T-shirt. However, the young talent reached the final and became number seven among all the competitors.

As a student, Sobral liked to travel: he visited the USA for academic purposes and spent a vacation in Mallorca, a Spanish island. He worked part-time as a restaurant singer there and performed Ray Charles’s, Leonard Cohen’s, and Stevie Wonder’s hits he had mastered during his preparation for the TV competition.

Music was inspiring Salvador, and he decided to quit the university to enter Taller de Músics in Barcelona. Sobral studied jazz and soul styles; he was also enthusiastic about bossa nova and Latino rhythms and tunes. In 2014, Salvador Sobral successfully graduated and became a professional singer.

When the young man studied in Spain, he organized the pop-indie group Noko Woi; their first album Live at Cosmic Blend Studios was released in 2012. Two years later, the band performed at Sónar Festival in Barcelona; about 80 000 visitors go there annually, and musicians give around-the-clock shows for three days. Those who are invited to the festival are considered successful in their alternative music careers.

Two years later, the singer came back to his home country and left the group to begin his solo career. The debuting work, Excuse Me, was released by Valentim de Carvalho recording studio and immediately reached number ten in the national music chart. The album was notable for the mixture of Brazilian music and national tunes; Sobral invited his friends, the pianist Júlio Resende and the Venezuelan composer Leo Aldrey to collaborate. Soon, Portuguese radio channels presented the musicians’ singles; Sobral was invited to Vodafone Mexefest and EDP Cool Jazz.

The participation in Eurovision Song Contest 2017 in Kyiv was significant for the artist: he was going to earn much popularity in his home country and worldwide if he won. Salvador presented the song “Аmar Pelos Dois”; his sister created in within one night. The song received the majority of votes at the national trial in March.

Because of his disease, Salvador had specific performance conditions: he would appear only in the competition audition while Luísa, a popular folk singer, would go to rehearsals. Besides, she was ready to replace her brother during the contest if he had health issues. Salvador Sobral did not go up to the large stage and sang with a few lights turned on.

26 singers from different countries went to Ukraine at the beginning of May. The Russian singer Yuliya Samoylova who had cerebral palsy was not allowed to appear before the audience by the host country because of political issues; the woman used to reach the final of the Faktor A music contest.

The Bulgarian and Italian representatives, Kristian Kostov and Francesco Gabbani, were among the leaders. However, Salvador’s recording 758 points left everybody far behind: it was, undoubtedly, a triumph. More than 18 million people watched Sobral’s performance on YouTube. The winner sang the contest hit together with his sister at the awarding ceremony.

There is no information about the singer’s personal life. The media used to speculate that Salvador was gay, but it was never confirmed.

130 000 people follow Sobral on Instagram. He shares pictures with his mother, sister, and friends and announces upcoming events.

Salvador Sobral continues to create music and give concerts according to his health condition.

In 2017, the musician talked about a new solo album in Portuguese; the premiere of Paris, Lisboa took place in March 2019. There have been no official videos yet, but fans are looking forward to seeing it.