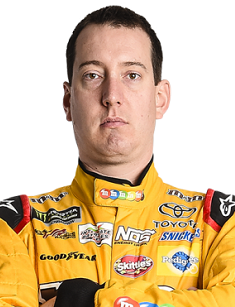 Kyle Thomas Busch (also known under the nickname Rowdy) is an American professional stock car racing driver who also has his own team. Busch is the younger brother of 2004 NASCAR Nextel Cup Series champion Kurt Busch. Nowadays Kyle Busch performs full-time in the Monster Energy NASCAR Cup Series, driving the No. 18 Toyota Camry. In his 17-year career, the driver has taken part in 349 races.

Alongside Richard Petty, Ricky Stenhouse Jr., Kevin Harvick, and Clint Bowyer he is one of the most successful stock car racing drivers of today. Let’s know what makes Kyle Busch so special!

Kyle Busch's birthplace is Las Vegas, Nevada – he was born there on May 2, 1985. He started taking his first driving lessons when he was 6 – little Kyle drove around the cul-de-sac of his family's Las Vegas neighborhood in a makeshift go-kart. Although sometimes Busch failed to do something while driving, he managed to adopt his father Tom's knowledge and experience. As a kid, the boy worked in the family garage with his father and older brother Kurt.

Having turned 13, in 1998, Busch started his career. In the span between 1999 and 2001, the driver became the winner of 65 legends car racings, was named the champion at the Las Vegas Motor Speedway Bullring short-track.

When Busch was 16, he started competing in the NASCAR Craftsman Truck Series (now Camping World Truck Series). He drove the No. 99 Ford for Roush Racing replacing Nathan Haseleu, who was released midway in the 2001 season.

2002 was marked by Busch's graduation from Durango High School in Las Vegas, Nevada. He decided to focus on his driving career.

Kyle Busch's NASCAR career started in 2003 – he was a development driver for Hendrick Motorsports.

In 2004 he competed in the ARCA Re/MAX Series 200-mile race at Daytona International Speedway and succeeded to win the event.

In 2009 he took part in the Nashville Fairgrounds Speedway and in the Phoenix Championship.

Kyle Busch has also formed Kyle Busch Motorsports, and the team made its Camping World Trucks Series debut during the 2010 season.

The team has already collected more than 5 Truck Series Owner's Championships and has picked 45+ victories, including a single-season series' record 14 wins in 2014.

They also competed briefly in the then-Nationwide Series (now Xfinity Series), but left after 2013 due to a lack of funding.

Kyle Busch’s net worth is evaluated at $50 million.

On November 4, 2011, Busch was mixed up with an incident during the Camping World Truck Series Win Star World Casino 350K at Texas Motor Speedway. While passing the lapped truck of Johnny Chapman, Busch made contact with series regular championship contender Ron Hornaday, Jr. – it caused a caution flag to be displayed.

While under the yellow flag, Busch drove to Hornaday's truck during the caution and deliberately turned him into the outside wall, smashing Hornaday's truck and ending Hornaday's title hopes. NASCAR immediately black-flagged Busch and parked him for the remainder of the race for his aggressive driving.

As a result, after the race, Busch had to apologize for his behavior, to pay $50,000 for "actions detrimental to stock car racing" and miss national series.

Busch suffered a broken leg and a fractured foot in a serious crash in May 2018 during the Xfinity race at Daytona International Speedway.

He underwent a post-race inspection and surgery.

The wreck happened when Erik Jones in the No. 20 Toyota turned toward the infield, then back up the track and into oncoming traffic. Busch was right behind Jones and his No. 54 Toyota veered off the track at full speed and into an inside wall head-on. The crash looked frightening, but Busch was able to climb out of his car by himself before laying down on the grass, according to his words in an interview.

Kyle Busch was considered to drive for the US-based Formula One team US F1. However, he himself declined the offer. Busch was scheduled to test drive a Toyota F1 car at the end of the 2008 racing season, but was forced to cancel the test due to his commitment to attend the 2008 Nationwide Series banquet.

Kyle Busch has a wife, Samantha Sarcinella. The woman was born in St. John, Indiana, to parents Steve and Donell and grew up near her large, close-knit Italian family. Being a focused student and fitness guru, Samantha met NASCAR driver Kurt Busch nearly ten years ago. They got acquainted in the summer of 2008 but didn't go on their first date until they spoke on the phone for four months. She studied at college, but the long-distance relationship appeared to work.

Kyle and Samantha became engaged and tied the knot 2 years later. Having graduated, Samantha left for Charlotte, and they became engaged in February 2010. Samantha and Kyle were married in Chicago on New Year's Eve 2010.

Samantha graduated with honors from Purdue University with a BA in Psychology in 2008. In June 2012, she earned her Master's degree in Industrial/Organizational Psychology. She served as a fitness instructor, teaching body sculpting and spin classes. She also worked as a model doing print work and appearances for Sprint, 17th Street Surf Shop and Bailey's.

On May 8, 2015, the family welcomed their first child Brexton Locke Busch.

Nowadays, Kyle's wife works closely with Kyle Busch Motorsports. She's involved in many of the day-to-day operations of the business, including the retail division. Samantha is also heavily involved in the social media strategy of KBM.

Samantha is an integral part of the fundraising efforts of the Kyle Busch Foundation, whose aim is to support children's homes in the Charlotte Metro area, as well as across the United States.

Kyle Busch and his family has been invited to many shows, including Jimmy Fallon’s The Tonight Show.

Busch claimed he thought the speed limit was 55 mph (89 km/h). The officer claimed Busch had a "disrespectful attitude."