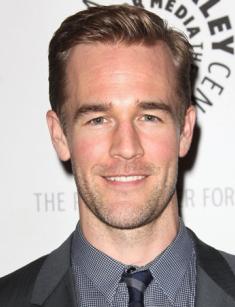 The American actor whose career started in his early ages. He tried himself in various genres and formats and gained significant recognition as a prominent character of the world-wide known TV series.

The actor was born in Connecticut in the family of the former dancer and teacher of gymnastics and former professional baseball pitcher. When James was thirteen, he had a concussion and doctors forbade him to play football for one year. That year he tried himself in the school movie” Grease” and fell in love with acting. James isn’t the only child. He has got a brother and a sister.

He began his acting career at the age of sixteen when the boy asked his mother to go to New York and find an agent for him. One year later the teenager made his debut performance on the play in the Signature Theatre Company. He got a positive critical review. He continued his education in college and took part in musical and in an independent movie. He dropped out of the university and decided to devote all his time acting career.

In 1999 he appeared on football drama, his actual work brought him the first prestigious award. Besides the magazine, People included the actor in the list of the most beautiful people in the world. He appeared on Texas Rangers, Scary Movie and others. But his career had ups and downs.

He came across with negative critics after looking on The Plaque. In the 2000s he continued to appear on TV series and movies, thus in 2009, he got the award for his work in the thriller Formosa Betrayed.

His television career started in 1997 when James auditioned for several pilots. James got the role on the TV show which became popular worldwide and was syndicated abroad. His co-star became the promising actress Katie Holmes.

That time his career was taking off, and the actor got role after role. When TV series Dawson’s Creek came to an end, James returned to the stage and appeared on off-Broadway. Then he made several guest appearances, the TV series How I Met Your Mother among them., in 2010 he got a significant role in TV series Mercy. In 2011 he starred in the music video of Kesha. He is a competitor of the current season of Dancing with the Stars. His bright dance with the partner Emma Slater became the brightest event of the new season.

The actor has been married to actress Heather McComb for six years. The couple split in 2009. In 2010 he married again. His wife is a business consultant Kimberly Brook who gifted him five kids, four daughters, and a son. In his free time, he enjoys playing the guitar and playing sports. He likes to watch baseball and football. His net worth is $10 million.