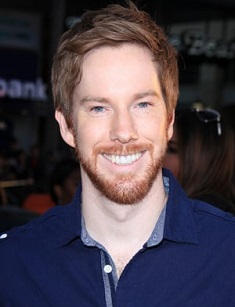 So, how has Chris Owen contributed to the world’s cinematography? It’s high time for us to know!

Chris Owen was born on September 25, 1980, in Houghton, Michigan, the United States. However, at an early age, he moved to California. Later the family changed the place of living again – they left for Parkhead, Edinburgh, shortly after – to the North of England. There future celebrity studied at Stevenson College.

As a kid, Chris Owen became interested in acting. The first project he took part in was the French-Canadian movie Le peloton d'excécution (1991). His talent was noted by professional directors, and Chris Owen started getting more invitations to pictures.

So, he succeeded to appear in Major Payne, Black Sheep, Can't Hardly Wait, She's All That, October Sky, and the 1995 movie Angus, the first of five pictures with longtime friend and colleague Charlie Talbert.

In 1999 fans could see Chris Owen playing in the hit comedy movie American Pie - he played the role of Chuck Sherman, a teenager that boasts himself of being a "ladies man" and goes by "The Sherminator." Owen played his character in all of the sequels of the American Pie movie franchise, including one of the straight-to-DVD spin-offs called American Pie Presents: Band Camp.

Meanwhile, Chris Owen was also a star of TV shows like 7th Heaven, Monk, and The Mentalist.

In 2014 the news appeared Chris Owen worked as a waiter at a sushi restaurant in Santa Monica, California. Owen himself said,

"life doesn't always go the way you planned. I love acting, and this job lets me stay in the fight."

That time the actor was also invited to the movie Criminal Minds.

In his career, Chris Owen has also been featured in in the music videos of Something Corporate's song "If You C Jordan" and Dimitri Vegas & Like Mike's hit single "Mammoth" with Moguai, remixed by Hardstyle superstar Coone.

Chris Owen married his longtime girlfriend, Michelle Beck, a famous actress, in 2007. However, their relationship ended in divorce in 2012.

By his name, Chris Owen is often mistaken for Chris Benoit or Chris Paul, who has recently appeared in the State Farm commercial.

Besides cinema, Chris is keen on framed art. Also, he is a big fan of the movie Back to the Future. In his admissions he said, this picture inspired him for acting career.