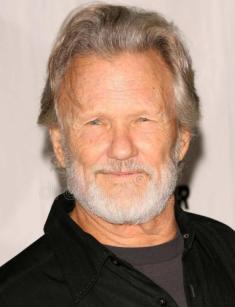 Kris Kristofferson is a famous American actor and musician. He is a former soldier who gave up a promising career in the military for the sake of becoming a songwriter. Kristofferson is best known for penning such classics as 'Sunday Mornin' Comin' Down,' 'Once More with Feeling,' 'For the Good Times,' 'Help Me Make It Through the Night' and 'Me and Bobby McGee.'

Besides music, Kris Kristofferson decided to dedicate himself to the world of cinema. Among the first pictures he took part in, there were 'The Last Movie,' and 'Cisco Pike.' His most successful films were 'Pat Garrett and Billy, the Kid,' 'Alice Doesn't Live Here Anymore,' 'Vigilante Force,' and 'Convoy.'

Are you interested in Kris Kristofferson's life and a way to success? Read below about the star right now!

Kristoffer Kristofferson's birthdate is June 22, 1936 – he was born in Brownsville, Texas, the United States to the family of Lars Henry Kristofferson, an Air Force Major General who retired from the military and joined the Saudi Arabian company Aramco, and Mary Ann.

The future star passed the majority of his childhood in Brownsville, Texas. Although, as a teenager, he studied at San Mateo High School, California – he graduated in 1954. Later Kristofferson entered Pomona College, Claremont, where he won a short story contest conducted by Atlantic Monthly magazine.

Studying there, Kristofferson was keen on sport. He got his bachelor degree in Literature. Armed with a Rhodes Scholarship, he enrolled at Oxford University's Merton College and obtained a B. Phil in English literature in 1960.

Kristofferson joined the Army and was posted in West Germany during the beginning of the 1960s. In 1965, assigned to West Point military academy as an English instructor, he decided to resign from the Army to focus on songwriting seriously.

Having moved to Nashville, Kristoffer struggled to make ends meet. He succeeded as a songwriter with the lyrics' Viet Nam Blues' for singer Dave Dudley, which made the Top 20 in 1966.

In the 1970s Kristofferson partnered with Ray Stevens ('Sunday Mornin' Comin' Down'), Jerry Lee Lewis ('Once More with Feeling'), Ray Price ('For the Good Times'), Barbra Streisand and Sammi Smith ('Help Me Make It Through the Night').

In 1970 the musician released his own debut album entitled 'Kristofferson.' Unfortunately, it was a commercial failure. However, Kris didn't give up and released a new album the following year. It was entitled 'The Silver Tongued Devil and I.' The collection reached high places on the Country and Pop charts, and gave him recognition as a singer.

Later, the musician pleased his fans by new albums 'Border Lord', 'Woodstock Generation,' 'Jesus Was a Capricorn.' Its chart-busting singles, 'Why Me,' and 'Come Sundown' ensured the success of the album. His next album was recorded alongside his then-wife Rita Coolidge. The next year the couple released the projects together again - 'Spooky Lady's Sideshow,' 'Slow Down' and 'Fall into Spring.' But they failed to bring the artists success.

Alongside with Dolly Parton, Willie Nelson, Brenda Lee, the singer released the double album, 'The Winning Hand,' in 1982, which reached No. 4 on U.S. Billboard Top Country Album.

In 1989, Kristofferson teamed up with Willie Nelson, Waylon Jennings, and Johnny Cash to form the band 'The Highwaymen.' Their albums, 'Highwayman' and 'Highwayman 2' happened to be real hits.

In 2009, Kristoffer published the album, 'Closer to the Bone.' It included the top song, 'Good Morning John' about Johnny Cash, while the single 'Sister Sinead' was a tribute to Sinéad O'Connor. Besides, that year was marked by the musician’s new song 'From Here to Forever.'

In 2018, Kris Kristofferson performed alongside Chaka Khan, Rufus Wainwright, Emmylou Harris and many others at Joni Mitchell’s tribute concert.

Besides, in his career Kristofferson has often performed at Carnegie Hall, Manchester Opera House, and even at the White House.

1971 was marked by Kristofferson's acting debut in Dennis Hopper's 'The Last Movie.' Besides, he starred in the Bill Norton's cult movie 'Cisco Pike.' His role was a failed musician-turned-drug peddler.

In 1973 fans could see Kristofferson acting in the Sam Peckinpah’s picture, 'Pat Garrett and Billy, the Kid.' His role of Billy, the Kid, brought him BAFTA nomination for Most Promising Newcomer.

The next year, he got the role of opposite Academy Award-winning actress, Ellen Burstyn in Martin Scorsese comedy movie, 'Alice Doesn't Live Here Anymore.'

Kris Kristofferson took part in the recording of 'Vigilante Force' – he played Aaron Arnold, a Vietnam War veteran who undertook the task of protecting a town from a gang of raucous oil-field workers.

In 1978, the star appeared in a Peckinpah film, 'Convoy' as Rubber Duck. A grand success, it made $45 million at the box office.

Kristofferson played alongside Wesley Snipes in the 1998 Vampire-action movie, 'Blade.' He went on to reprise his role as Blade's mentor Abraham Whistler in the sequels' Blade II', and 'Blade: Trinity'.

The span between 2001 and 2008 was marked by Kristofferson's roles in 'Planet of the Apes,' 'Dreamer: Inspired by a True Story,' 'The Wendell Baker Story' and 'Beer for My Horses.'

Kristoffer Kristofferson’s net worth is evaluated at $160 million.

In his life, Kristofferson has had two wives and has eight children. His first two partners were his childhood sweetheart Frances Bier, and singer Rita Coolidge. Kristofferson married Lisa Meyers in 1983. They own a home in Los Flores Canyon in Malibu, California, and maintain a residence in Hana on the island of Maui.

According to the Huffington Post, Kristofferson struggles with memory loss from time to time.

By his appearance, Kris Kristofferson looks like Jeff Bridges, an American actor.