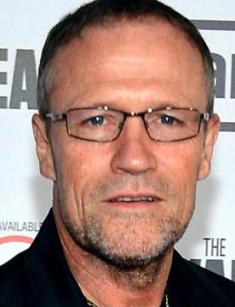 The star of the zombie horror series The Walking Dead and space action movie Guardians of the Galaxy, Michael Rooker, is a world-famous actor. Rooker rose to prominence after the release of the blockbuster Guardians of the Galaxy, in which he got the role of Yondu, a member of the tribe, primitive beings native to Centauri IV. He is depicted as a blue-skinned male with an impressive fin on his head.

The American actor was born in Jasper, Alabama, in April 1955. His family was not connected with the art world.

After a divorce, Michael stayed with his mother. Soon they left Jasper and moved to bustling Chicago, where it was easier to find a job. Life without a father was not easy. Sometimes young Rooker and his mother did not have enough money for food.

It is not known when the ordinary boy began to dream of an acting career, but Michael Rooker became interested in performing arts in elementary school. In high school, he already performed on the stage of the school theater, playing the leading roles in student performances.

After graduation, Rooker did not even think about any other career. Michael attended the Goodman School of Drama, completed his studies, and went to the professional stage. Before making it into the world of cinema, the actor improved his skills on the theatre stage.

The American actor made his movie debut at the age of 31, playing bit parts in the TV series The Equalizer and Crime Story. The last project, directed by the eminent filmmaker and screenwriter, Abel Ferrara, is famous for the debutant actors who appeared in some episodes. Besides Rooker, novice Julia Roberts, Christian Slater and Kevin Spacey played in it.

But Michael Rooker began his acting career with the crime drama Henry: Portrait of a Serial Killer, in which he landed the leading role of the serial killer, Henry. The plot of the film is based on a true story.

The movie was warmly welcomed by viewers and film critics, and Rooker’s credentials included the first award, the Fantasporto Award for Best Actor. From then on, the actor’s career took off, and his filmography included two or three projects every year.

From 1987 to 1989, the American played supporting roles in the action films Above the Law and Rent-A-Cop, starring Burt Reynolds and Liza Minnelli. He appeared in the crime dramas, Eight Men Out and Mississippi Burning. On the set of these projects, Michael Rooker worked with Steven Seagal, Sharon Stone and Charlie Sheen, as well as with Al Pacino in the detective story Sea of Love.

In 1990, Tony Scott’s drama action movie Days of Thunder with Tom Cruise in the lead role was released. The director invited Rooker to play Rowdy Burns, the rival of Cruise’s hero, and the actor coped brilliantly with the task. The film was a box office success, grossing $ 157 million and receiving four Oscar nominations.

Michael Rooker managed to become a real Hollywood star, playing a leading role in Oliver Stone’s Oscar-winning drama JFK. Rooker's partner in the film was Kevin Costner. Later, he brilliantly played in the action film The Fast and the Furious, the thriller Cliffhanger, the TV series Fallen Angels, The Outer Limits, and JAG.

In 1992, Michael Rooker portrayed Sheriff Alan Pangborn in George Romero's thriller The Dark Half. It is a film adaptation of the novel of the same name by Stephen King about the writer and maniac. Two-thirds of Rooker's characters are criminals or investigating officers, but he has starred with Hollywood stars. Michael has collaborated with Sylvester Stallone, Tim Roth, James Roday.

In the mid-1990s, the actor appeared in Kevin Smith’s comedy film Mallrats which was warmly received by viewers. In 1997, he played a detective in the thriller Deceiver. The project of Jonas and Josh Pate was a box office success, grossing $279 thousand in the very first weekend in the USA and winning prestigious awards at the international film festivals.

At the end of the 1990s, Michael Rooker landed the leading roles in the thriller Shadow Builder, the action movie Renegade Force, and the crime project The Bone Collector, on the set of which he met Denzel Washington, Angelina Jolie and Queen Latifah

At the beginning of the 2000s, the actor portrayed Robert Marshall in the cyberpunk thriller The 6th Day, in which Arnold Schwarzenegger also starred. It was followed by the science fiction action movie Replicant with Jean-Claude Van Damme and the sci-fi series Stargate SG-1. In 2006, viewers welcomed Michael Rooker’s acting in the horror movie Slither, and the following year, they saw the actor in the horror film Whisper.

The actor rode a wave of popularity from 2010 to 2013, when Frank Darabont’s zombie apocalyptic horror television series The Walking Dead, based on the comic books of the same name, was released. Michael Rooker portrayed Merle Dixon in the first three seasons. The series had tremendous success, won the Golden Globe Award, and received the Saturn and Writers Guild of America Awards nominations.

The films with Rooker are a great way to immerse yourself in the breathtaking world of detectives and thrillers. The actor’s fans also appreciate the TV comedy-detective Psych, in which Michael played a small but bright role.

Michael Rooker is one of those Hollywood actors who do not like to make their family relations and personal lives public. This part of the actor’s life is a closed book.

Rooker has been happily married to Margot Rooker for a long time. The spouses have raised two daughters. One of them gave birth to Michael and Margot’s granddaughter, whom the grandparents adore.

Rooker has signed up for social networks, and eagerly communicates with fans, delighting them with recent photos on Instagram.

At the end of April 2017, the Hollywood actor visited Ivan Urgant. Rooker and James Gunn, the director of Guardians of the Galaxy, attended the late-night talk show Evening Urgant.

Rooker and Gunn told about the events in the second part of the fantasy project and demonstrated an excellent sense of humor. Michael Rooker told his version of the final episodes of the TV series The Walking Dead.

In the summer of 2017, the American horror film The Belko Experiment directed by Australian filmmaker and screenwriter, Greg McLean, premiered in Russia. The film about 80 corporation employees, who were blocked in the Colombian skyscraper, grossed $ 10 million against a production budget of $ 5 million.

Michael Rooker has a net worth of $8 million.