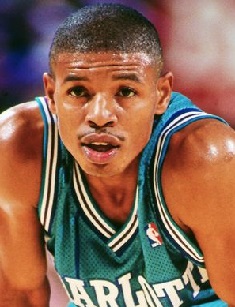 Muggsy Bogues is a retired professional basketball player for the National Basketball Association. He has played for the Washington Bullets, the Charlotte Hornets, the Golden State Warriors, and the Toronto Raptors. Standing at 5 feet 3 inches(1.6m), he is the shortest player in history to play in the NBA. His performance made him a quick fan favorite during his 14-season long career from 1987 to 2001.

Muggsy Bogues’s highlights in his career show what can be done with a lot of determination, as he achieved his dreams despite abject poverty and the discrimination against his height in the many courts he’s played in. His incredible ball-control statistics have made him a highly ranked point guard. In an interview for Sports Illustrated with Hank Hersch, he said that he has always kept a strong belief in himself, and believed that his talents and abilities earn him a place in the court.

Bogues was born under the name of Tyrone Curtis Bogues on January 9, 1965, in Baltimore, Maryland. The east-side housing projects of Baltimore was a dangerous place to grow up in, where drugs and crime ran rampant. When he was 12, Bogues saw his dockworker father Richard imprisoned on an attempted robbery charge. In an interview with Bruce Newman for Sports Illustrated, he admitted that he wasn’t proud of what his father did, but understood that under their conditions, it might have been the only way they could survive.

The other older members of the Bogue family remained in contact with Muggsy, sending encouraging letters on his efforts to get a career in basketball. Muggsy Bogues is now 54 years old.

Bogues began his career with a short stint in the USBL with the Rhode Island Gulls. In the 1987 NBA draft, Bogues was drafted 12th overall in a selection list packed with talent, including Reggie Miller, David Robinson, Kevin Johnson, and Scottie Pippen. In his rookie year, Bogues and Manute Bol were in the same team. At the time, Bol was the tallest player in NBA history at 7 ft 7 in (2.31m) tall. The two had a height difference of 28 inches (71 cm). The two appeared together on three magazine covers.

As a proof of his skill on the court, Bogues stats included 39 blocks in his NBA span. He once blocked Patrick Ewing, who stands at 7 ft 0 in (2.13m) tall. On April 14, 1993, in the first quarter of the game, he removed the ball from Ewing’s hand while he was pulling the ball up to make the shot. Muggsy Bogues’s vertical leap of 44 inches (110 cm) is well-known among basketball players and fans. However, the size of his hands made it difficult for him to dunk one-handed. There are claims that Bogues once dunked successfully on a pregame practice in December 1990, but the claims have never been confirmed.

In the 1988-89 NBA season, the Charlotte Hornets and the Miami Heat were about to enter the NBA. The Bullets left Bogues unprotected even though they were weak in the point guard position. Bogues was selected by the Hornets in the expansion draft on June 22, 1988. He became famous for being an exceptional stealer, a great passer, and one of the fastest players in the game.

Bogues stayed with the Hornets for 10 years alongside Alonzo Mourning and Larry Johnson, which led to the team being a consistent favorite for the playoffs and one of the most popular teams in the NBA. In the history of the Hornets, Bogues is one of their most famous players. He serves as the career leader in assists (5,557), assists per 48 minutes (13.5), steals (1,067), turnovers (1,118) and minutes played (19,768).

Bogues’ career with the Hornets ended six games into the 1997 – 98 NBA season. Along with Tony Delk, they were traded to the Golden State Warriors for B.J. Armstrong. Bogues saw play with the Warriors for two seasons, then left to become a free agent in the Toronto Raptors. He finished his career there Although he was later traded to both the Dallas Mavericks and the New York Knicks, he didn’t play for either team.

Muggsy Bogues’s awards are numerous. In 1987, Bogues received the Arnold Palmer Award in Wake Forest University, where he had his jersey number retired. He was the 12th overall pick in the 1987 NBA Draft, where he was picked by the Washington Bullets. In his 14-season long career, he played for the Bullets, the Charlotte Hornets, the Golden State Warriors, and the Toronto Raptors.

In 1995, he was named Player of the Year in the Charlotte Hornets and the Jim Thorpe Award for Inspiration. He was inducted into the Wake Forest University Sports Hall of Fame in 2001.

When he left the NBA, Bogues started working in the real estate business. On August 3, 2005, he became the Charlotte Sting’s head coach in the Women’s National Basketball Association. At this point, he had a lack of coaching experience. He also stood shorter than all of his players, with the shortest player being Helen Darling who stood at 5 foot 6 inches (1.67 meters). Under Bogues’ coaching, the Sting went on a 14-30 record. The team folded in January 2007.

In 2011, he served as the head coach of the United Faith Christian Academy’s boys high school basketball team in Charlotte, North Carolina. This was after he was an assistant to the team’s former head coach Shaun Wiseman. Bogues has written an autobiography entitled “In the Land of Giants”. In the book, he writes about his struggles when he was growing up in inner-city Baltimore as well as his path to success in the NBA.

Bogues was assigned to be the Charlotte Hornets’ Ambassador on March 18, 2014. He would participate in the team’s rebranding efforts.

Muggsy Bogues’s net worth is $15 million which he earned after being a professional basketball player who took coaching positions as the head coach of the WNBA’s Charlotte Sting, as well as the United Faith Christian Academy’s boys basketball team.