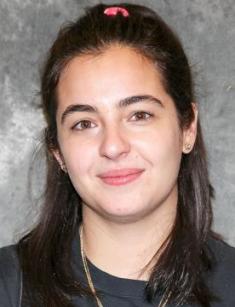 The American cinema has seen a lot of examples when younger brothers and sisters of famous actors have followed in their footsteps. Ben and Casey Affleck, Kate and Rooney Mara, Ralph and Joseph Fiennes, Dakota and Elle Fanning, Sylvester and Frank Stallone, the Baldwin, Culkin, Hemsworth and Wine brothers are only a few representatives. People should also pay attention to Alanna Masterson and her brothers.

The future actress was born in Long Island, USA, on June 27, 1988, to Carol Masterson, a middle-rank manager, and the famous rugby league footballer, Joe Reaiche.

Little Alanna spent a lot of time with her brothers on the set. Thus, the girl realized in her childhood that she wanted to become an actress.

The girl first appeared on the screen in 1994 when young Masterson got a role in the television soap opera The Young and the Restless, telling about the confrontation between two wealthy families in a small English town. Then, Alanna had a long career break during which she only occasionally appeared in music videos of various bands, including Oasis.

In 2006, Masterson restarted her career, playing in the comedy series Malcolm in the Middle. In the TV project, a little boy named Malcolm talks about life in a large and noisy family. Frankie Muniz, Bryan Cranston, Jane Kaczmarek, and Christopher Masterson (the actress’s brother) played the leading roles in the film.

In 2009, Masterson appeared in the TV series Terminator: The Sarah Connor Chronicles. The action takes place in the same universe as the events of the original franchise with Arnold Schwarzenegger, following the events of Terminator 2: Judgment Day, and ignoring the facts of the 2003 sequel. Lena Headey, Thomas Dekker, Summer Glau, Brian Austin Green, and others portrayed the title characters. Alanna got the role of Zoe McCarthy.

After filming in the fantasy action movie, the actress decided to star in a light film, so her next project was Grey's Anatomy. The series shows the details of the life of a female surgeon, Meredith Grey. In addition to Masterson, Ellen Pompeo, Patrick Dempsey, Justin Chambers, and Jazz Raycole starred in the series.

In 2010, Masterson had a chance to play in the comedy series First Day, another variation on the theme of Groundhog Day. In 2011, Alanna starred in the drama film Peach Plum Pear, directed by Alana Morshead (Entourage, Joe Killionaire), starring Tyler Blackburn and Alex Beh.

Since 2011, Masterson has filmed in The Walking Dead, a cult TV series about a group of people trying to survive during a zombie apocalypse. The project is based on the comics of the same name, produced by Image Comics, famous for such a character as Spawn, the hero of several film adaptations. Frank Darabont (The Shawshank Redemption, The Green Mile, The Mist) served as the showrunner for The Walking Dead.

In 2014, the actress played a role in the TV series Men at Work, a comedy-melodrama about four journalist and friends who try to solve problems in their personal lives. Michael Cassidy, Adam Busch, James Lesure, Alanna's third brother Danny, and Oscar-winning J. K. Simmons played the leading roles.

Two years later, Masterson took part in the filming of the American remake of the British TV series Mistresses. The story resembles the popular TV series Desperate Housewives because it focuses on four female friends who are connected by a dark secret. Yunjin Kim, Rochelle Aytes, Jes Macallan, Alyssa Milano, Justin Hartley, and Brett Tucker played the leading roles in the project.

For more than eight years, Alanna has been in a long-term relationship with a boyfriend named Brick Stowell, a famous American photo reporter.

On November 5 of the same year, the actress and her husband had a daughter, whom the parents named Marlowe Stowell. Masterson immediately posted a photo of the happy father and newborn daughter on Instagram.

At the end of 2017, the actress filmed only in The Walking Dead and did not look for other projects.

But she actively participates in the events related to the TV series.

Alanna Masterson has a net worth of $2 million.