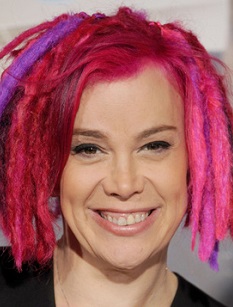 Lana Wachowski is an American film and TV director, writer and producer. She and her sister Lilly Wachowski are both trans women. Lana is most famous for writing and directing the movies Bound (1996), The Matrix (1999) and the Netflix series Sense8.

Lana Wachowski was born as Larry Wachowski in Chicago, Illinois, USA. Her mother Lynne (née Luckinbill) worked as a nurse and was known to be a painter. Her father Ron Wachowski ran his own business. Her uncle Laurence Luckinbill is the actor and film producer. Lana has three other sisters: Lilly, Julie and Laura. Lilly Wachowski is also a transgender woman who changed her sex in 2016. Julie is a novelist and screenwriter, who worked as an assistant coordinator in the film Bound, directed by Wachowski.

Lana got educated at the Bard College in New York. She along with her sister Lilly didn't finish the studies and started a career in show business. Apart from the construction business, they tried themselves in writing comic books, which was their favorite hobby in adolescence.

In 1995, they co-wrote the screenplay for the feature film Assassins starring Sylvester Stallone and Antonio Banderas.

In 1996, they continued to co-write and presented their joint film Bound, which debuted at the Toronto Film Festival. The film was highly appreciated and won awards from several festivals, including the Grand Jury Award.

In 1999, Lana and Lilly shared their new work: The Matrix, starring Keanu Reeves. The film won four Academy Awards for Editing, Sound Effects Editing, Visual Effects and Sound. The Wachowski brothers received a Saturn Award for Best Director from the Academy of Science Fiction, Fantasy & Horror Films that same year. It was one of the most popular movies at that time and their main success.

The audience was delighted with The Matrix and called out for Matrix sequels. Lilly and Lane had an idea of making a trilogy of the film. In 2003, they co-wrote two sequels: The Matrix Reloaded and The Matrix Revolutions. The cartoon Final Flight of the Osiris, directed by The Wachowskis in 2003, came as a sequence in The Animatrix that acted as a direct prelude to the events in The Matrix Reloaded and Enter the Matrix.

In 2008, famous writers issued a new film, called Speed Racer. The film was based on a 1960s Japanese manga series.

In 2009, the duo released their next film project, which was named Ninja Assassin. It was a martial arts film starring Rain Ji-hoon, a South Korean actor.

In 2012, the production team consisting of Lilly and Lana showed their next work: the film Cloud Atlas. The movie was shot based on the David Mitchell's 2004 novel of the same name starring Tom Hanks and Halle Berry. It was written and directed in collaboration with German filmmaker Tom Tykwer to whom the Wachowskis had introduced the novel several years earlier.

In June 2016, the writers put out the Netflix science fiction drama series Sense8. It was well received all over the world. Erik Barmack, vice president of international series for Netflix, noted that Sense8 became one of the most popular Netflix series in the Brazilian market.

In May 2019, it was reported that Lilly would co-write and executive produce the eight-episode first season of a drama-comedy series called Work in Progress, created by Abby McEnany and Tim Mason for television network Showtime.

In the early 2000s, there were rumors about Lana Wachowski's transitioning. In 2003, she was again reported about the possible sex-change. In 2007, Joel Silver, her colleague, confirmed the unfounded rumors. He explained that Wachowski just had no desire to give interviews. Other crew members working on Speed Racer supported that idea.

In a September 2012 interview with Aleksandar Hemon, Lana talked about the hesitation concerning the gender during her youth. As a man, Lilly felt very confused. She described an incident in third grade at Catholic School when she was hesitant to join the boys' line and unconsciously accepted herself as belonging to the girls'.

In 2008, Lana completed her transition after the release of the film Speed Racer. In December 2010, mass media started to call her by name "Lana Wachowski."

In July 2012, Lana made her first coming out after transitioning, in a video discussing their work process behind the film Cloud Atlas.

In October 2012, she was given the Human Rights Campaign's Visibility Award.

During her public speech, Lana frankly admitted that before surgery, she even thought about committing suicide as she had many doubts about her identity.

Lane, her brother also changed his gender. Lana and Lilly later added, that they had no fear to openly declare about their transitioning because they had good relations with their family and friends, who supported them all the time. Anyway, the Wachowskis prefer to keep their personal life a secret.

In February 2014, Lana received the Freedom Award from Equality Illinois at their annual gala in Chicago. She is the first major Hollywood director to come out as transgender.

On the photos before and after the sex-change, there is a big difference in Lana's image. Now the writer has a pink hairstyle and wears dresses. As critics point out, her new look suits her perfectly, and the most important thing is that Lana herself is now happy with her new appearance.

Larry divorced his wife, Thea Bloom, whom he left in 2002. In 2009, she started her relationships with Karin Winslow. Winslow is a board member of the Chicago House and Social Service Agency.

Lana is known to be a vegetarian. She is also interested in politics.

Lana and Lilly are big fans of computer games. As teens, they spent their weekends in the attic playing Dungeons & Dragons. They used to compare the process of their playing parties to their process of filmmaking. Along with some of their friends, they wrote a 350-page role-playing game of their own, called High Adventure.

Despite high profile projects, the sisters like to preserve their privacy and do not release much information about their lives.

Lilly and Lana worked in collaboration with David Perry on the Enter the Matrix and The Matrix: Path of Neo video games. They also put out The Matrix Online, a massively multiplayer online role-playing game.

The net worth of Lana Wachowski is estimated at $150 million.