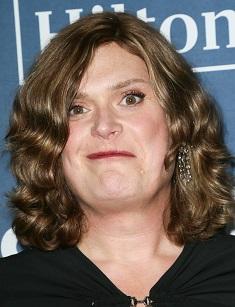 Lilly Wachowski is an American film director, writer and producer, most famous for creating The Matrix series and the Netflix show Sense8. Lilly is a transgender woman who announced about her sex change in 2016.

Lilly Wachowski was born in Chicago, Illinois, USA, with a birth name Andrew Paul Wachowski. Lilly's mother Lynne worked in medicine. She also had the talent to paint. Her father Ron ran a business. Lilly has a brother Lane and two sisters, Julie and Laura. Same as Lilly, Lane changed his gender and took the name of Lana Wachowski.

Lilly was educated at Kellogg Elementary School in Chicago. Later she began her studies at Whitney Young High School. While studying, Lilly was eager to take part in theater performances and television programs. After graduating from high school, she entered Emerson College in Boston but realized that she didn't want to continue studying in the college. She and her sister Lana were planning to start a business career.

At a young age, Lilly and Lana began creating comic books together. As well as her sister, Lilly interrupted her studies to pursue a career in cinematography.

In 1994, the sisters made their first appearance as script-writers along with Brian Helgeland. They released an action thriller film Assassins, starring Sylvester Stallone and Antonio Banderas.

In 1996, she and her transgender sister Lana pursued working in a team and appeared as script-writers and directors of the film Bound, which was praised by many critics. The Wachowskis got several significant awards, including the Grand Jury Award - Honorable Mention at L.A. Outfest, a GLAAD Media Award for Outstanding Film, and an International Fantasy Film Award at Fantasporto.

In 1999, gifted producers presented their movie hit called The Matrix, after which they became Hollywood stars. The writers were inspired by Japanese animation and martial art films. Most of the audience appreciated action scenes and groundbreaking special effects. The film won four Academy Awards for Editing, Sound Effects Editing, Visual Effects and Sound.

After a stunning release of the movie, the sisters decided to make the trilogy of The Matrix saga. In 2003, Lilly and Lana wrote and directed two sequels - The Matrix Reloaded and The Matrix Revolutions.

Interestingly enough, the Wachowskis were against the promotion of their Matrix sequels. They believed that the film would find its audience without advertising.

The team of two talented writers was engaged in some other projects that include: the cult hit V for Vendetta (2005), a live action version of a Japanese anime series, Speed Racer (2008), science fiction film Cloud Atlas (2012) and science fiction epic adventure Jupiter Ascending (2015).

In March 2016, Lilly Wachowski made coming out as a transgender woman, after announcing about her sex-change in the LGBT newspaper Windy City Times. In the interview, Lilly said that she was lucky to have the support of her family and the means to afford doctors and therapists. She admitted that without these possibilities, she couldn't be able to live through her problem. She marked that many transgender people mainly suffer from a lack of support and money.

Lilly made her first public appearance after the transition a few weeks later, at the 27th GLAAD Media Awards. She received an award for her Netflix series Sense8 for Outstanding Drama Series. After the show Lilly noted, that she didn't regret appearing at the ceremony, as she had a considerable support of his wife, friends and family. She felt very proud to get an award and to show up after her big change.

On the photos before and after the sex change, Lilly definitely looks different. She appeared in public with long hair, wearing a dress and high heels.

Andy has been married to Alisa Blasingame since 1991. Nothing was said about their separation, so possibly Lilly is still in good relations with his wife. It is a known fact that Alisa provided her tremendous moral support in the most challenging period of her life.

Lilly and Lana are ardent fans of computer games. In their childhood, they spent most of their free time playing fantasy role-playing game Dungeons & Dragons.

The sisters make frequent collaborations. They worked with David Perry, Northern Irish video game developer and programmer on the Enter the Matrix and The Matrix: Path of Neo video games. They wrote and filmed over an hour of exclusive footage for the video game, which is directly connected to the storyline of The Matrix Reloaded.

Lilly Wachowski made her net worth, that is estimated at $125 million, through the films and comic books.