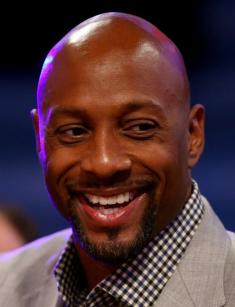 Alonzo Harding Mourning Jr. is a former American professional player who spent more than 15 years of his National Basketball Association (NBA) career performing for the Miami Heat on a center position. The player has got the nickname "Zo."

Alonzo was born on February 8, 1970 in Chesapeake, Virginia, the United States. At the age of 12, he had to get through his parents' divorce. As a result, the poor boy was sent to another family – there were 49 children, besides him. Their «mother» was Fanny Threat. When Mourning was 16, he visited the basketball summer camp – there the best teen players from around the city trained. Later, Mourning entered Indiana River High School where joined a students' basketball team.

On average, he scored 21.8 points and 11 rebounds per game as a student. When it came to choosing a university to study at, he was torn between Maryland University and Georgia Tech, but eventually entered Georgetown University. Alonzo traveled with AUU Virginia, performed at state competitions where made approximately 27 points. In his debut season for Hoyas, Mourning recorded 13 points. The player led his team to the Big East Men's Basketball Tournament – there they faced the Duke University team and were beaten.

Later Alonzo changed his game position – then, he started performing as a heavy forward instead of the center. Another player - Dikembe Mutombo became a center due to his height. Initially, Mourning failed to play well, but some time later he showed significant improvements. Unfortunately, he got injured and had to miss the rest of the season.

In 1991 his pal Mutombo left the University for the sake of NBA career. Mourning, in his turn, kept studying. He got a center position again and competed against LSU center Shaquille O’Neal. He aimed to become the best center player of the University. Mourning's idol was Patrick Ewing, a Jamaican-American retired Hall of Fame basketball player. When Mutombo quitted, Alonzo's average results were 21,3 points, 10,7 rebounds and 5 blocks per game. Such a brilliant game brought him many awards and nominations.

In 1992 Mourning applied for the NBA draft and was selected by the Charlotte Hornets. In his first playing year, Alonzo made 21.0 points, 10.3 rebounds and 3.5 blocks per game – due to these results, he was named to the league's all-rookie team. Also, he took part in rookie of the year voting and got the second place after Shaquille O'Neal. Mourning showed the best scoring results of any rookie in Hornets history. He, alongside Shaquille O'Neal, became the first NBA rookies to make on average more than 20 points and more than 10 rebounds in their debut seasons.

One of the most memorable moments during his career for the Hornets was on May 5, 1993. So, in a play-off, the team faced the Boston Celtics and won with the score 104-103. Unfortunately, in the second round, the New York Knicks defeated them. Then Morning registered 23,8 points, 9.9 rebounds and 3.4 blocks in 9 play-off games. The next year, Alonzo made 21.5 points, 10.2 rebounds, and 3.1 blocks. However, the Hornets didn’t reach a play-off.

The 1994-1995 year was marked by 50-victory season and reaching a play-off due to Alonzo's colleague Larry Johnson. Mourning was the best player in terms of points (21.3 per game), rebounds (9.9 per game), blocked shots (2.92 per game), and field goal percentage (.519). So, he was sent to the 1995 NBA All-Star Game where he scored 10 points and grabbed 8 rebounds. Unfortunately, in the first play-off match, the Hornets were beaten by the Chicago Bulls. However, Mourning showed perfect results – 22 points, 13.3 rebounds and 3.3 blocks per fight.

In November 1995, the Charlotte Hornets offered him to sign an $11 million 7-year contract extension, but the player denied. As a result, the team traded him, along with reserves Pete Myers and LeRon Ellis in exchange for Glen Rice, Matt Geiger, Khalid Reeves.

So, Mourning became a member of the Miami Heat. In his debut season, Alonzo scored 23,2 points, 10,4 rebounds and 2,7 blocks per game. In 1996 Alonzo succeeded to play in the 1996 NBA All-Star Game and was joined by all-star point guard Tim Hardaway who arrived through a midseason trade.

In Summer 1996, Mourning signed a 7-year $105 million contract with the Heat. The 1996/97 season happened to be extremely successful for the team – they won 61 matches. Mourning's average results were 19.8 points, 9.9 rebounds, and 2.9 blocks. The team reached a play-off and won the Orlando Magic in five games. As a result, they got to the conference semifinals against the New York Knicks, where the rivalry between the Heat and the New York Knicks intensified.

The game was nervous, and there was even a brawl between Charlie Ward and P. J. Brown late in Game 5. In the next match Alonzo registered 28 points, in Game 7 he made 12 rebounds and led the franchise to the Eastern Conference Finals. There the Miami Heat fought against the Chicago. The opposers won the first three games. Mourning gifted his club victory in Game 4. The Heat won 87–80, but they lost Game 5 100–87.

The next season Mourning made 19.2 points, 9.6 rebounds and 2.2 blocks per game, but took part in 58 games only. Miami was eliminated in the first round by the Knicks, a series in which Mourning was suspended for the 5th and deciding game due to an on-court fight with ex-teammate Larry Johnson, with Knicks head coach Jeff Van Gundy hanging onto Mourning's leg in an attempt to break it up.

In the 1998/99 season, Alonzo registered 20.1 points, 11 rebounds and 3.9 blocks per game. Also, Miami received another Atlantic Division title. Mourning won the NBA Defensive Player of the Year Award, was named All-NBA First Team and finished second to Karl Malone in the NBA Most Valuable Player Award voting. Unfortunately, in a play-off the Miami Heat were defeated by the Knicks.

The next playing year brought Mourning average results of 21.7 points, 9.5 rebounds, and 3.7 blocks. Due to it, he received the second straight Defensive Player of the Year Award. The Heat advanced to a play-off where faced the Detroit Pistons. In the postseason the franchise fought against New York and took a 3-2 series lead. In summer, Alonzo represented the United States at the Olympics in Sydney.

That time the Miami management decided to renew the team: they bought new members, found new coaches. In 2000 Alonzo was diagnosed with focal segmental glomerulosclerosis, a kidney condition. The disease made him miss 5 months of playing. He got back to games on March 27 and took part in 13 games in total. The Heat got to the postseason but were beaten by the Charlotte Hornets.

The next year, Mourning managed to play in 75 games and took part in the 2002 NBA All-Star Game. The sportsman scored 15.7 points, 8.4 rebounds and 2.5 blocks per game, but didn’t succeed to lead the Heat to a play-off. Alonzo missed the whole 2002-2003 season because of a disease. As a result, the club didn’t offer him prolong a contract.

So, the New Jersey Nets hired him as a free agent in 2003. However, on November 25, Mourning left the NBA because of the state of health. In December he underwent a successful kidney transplant. In 2004 he got back to working with the Nets and became its member for the 2004-2005 season. However, he was not pleased by the team and publicly claimed he planned to leave it. Especially he became angry after the New Jersey sold his pal, Kenyon Martin. On December 17, 2004, he was sent to the Toronto Raptors. However, he didn’t want to perform for them and was bought out of his contract at a remaining 9 million dollars on February 11, 2005. Raptors team officials later said that he did not meet the medical conditions to perform for the franchise. Mourning then finished the season with the Miami Heat being paid a second salary, the veteran's minimum.

On March 1, 2005, Mourning got back to the Miami Heat. He had a backup role. Because of the disease, Mourning could play fewer minutes. In the 2004-2005 season, they gained and maintained the second-best record in the NBA's Eastern Conference. Alonzo finished third in terms of blocked shots (2.66 per game). The team advanced to play-off where they won the Nets with 21 points and 9 rebounds made in 16 minutes. In the next match, they faced the Washington Wizards. Mourning replaced the injured O'Neal and registered 14 points, 13 rebounds, and 4 blocked shots. Unfortunately, in the Eastern Conference Finals, the Miami was defeated by the defending champion Detroit Pistons.

Mourning signed a contract extension with the Heat. Also, the team bought new players - Antoine Walker and Gary Payton. When O'Neal suffered an injury, Alonzo substituted him. Totally, he took part in 65 games, having recorded 7.8 points and 5.5 rebounds per game. He took the third place in terms of block shots (2.7 per game) – in spite he was a reserve player. The team got to a play-off, where they defeated the Detroit and succeeded to reach the 2006 NBA Finals, the first NBA Finals in franchise history and the first for Mourning. Eventually, the club became the NBA champions.

After the victory, Alonzo was proposed to join other clubs, including the San Antonio Spurs. In 2007 Alonzo announced the upcoming year (the 15th playing season in his career) would become the last for him. On average, the player made 6 points, 3.8 rebounds, and 1.75 blocks in 16 minutes in his last games. Alonzo injured a knee and missed several games.

In 2009 Alonzo publicly said he would retire. According to him, he felt he had already done everything he could for the game. The team arranged a retirement ceremony in honor of such a brilliant player – the event took place on March 30, 2009. Amongst the guests there were Florida Governor Charlie Crist; former Georgetown University basketball coach John Thompson; Basketball Hall of Famer Patrick Ewing; Heat players Dwyane Wade and Udonis Haslem; and Heat head coach Pat Riley. The news about the ceremony was on every highlight.

In June 2009 Alonzo returned to the Heat as a Vice President of Player Programs and Development.

For his perfect NBA stats and outstanding style of playing, Alonzo was inducted into the Virginia Sports Hall of Fame in 2010.

Alonzo's current net worth is estimated at $70 million.

From 2009 to 2013 Alonzo was linked with Monique Exposito. After their break-up, Mourning met his current wife Tracy Mourning (Wilson.) They have three kids together: Alonzo III ("Trey"), a daughter named Myka Sydney, and a second son named Alijah (born September 18, 2009). The latter follows his dad's path – he joined the Georgetown Hoyas basketball team as a power forward under the number 33. The family lives in a two-story, 9,786-square-foot $4.5 million home in Pinecrest, Florida since 2012. They have a mistress to maintain order.

One of the best Alonzo's best friends is Muggsy Bogues – they met while playing and became good pals.

His Alonzo Mourning Charities, Inc. was started in 1997 as a way to help children and families living in at-risk situations.

Mourning’s campaign Zo's Fund for Life was begun after he was diagnosed with Focal Glomerulosclerosis (FSGS) and raises funds for research and education in the fight against the disease, as well as providing funding for those not able to afford treatment. He supports The NephCure Foundation, which also focuses on finding treatments for FSGS.

Alonzo is one of the founding members of Athletes For Hope.

The Overtown Youth Center is Alonzo’s program for underprivileged kids in Miami, founded in 2003. Overtown Youth Center’s (OYC) mission is to inspire, empower, and enrich the lives of youth and families in Overtown. On a daily basis, they strive to transform the lives of young people by providing an array of services ranging from academic support and enrichment opportunities to meaningful life skill lessons/activities. The OYC team is dedicated and committed to providing children with countless opportunities to maximize their potential! OYC strives to bridge educational, social and emotional gaps for youth growing up in a challenging community.

Mourning helped raise awareness for a three-year-old boy in need of a liver transplant.