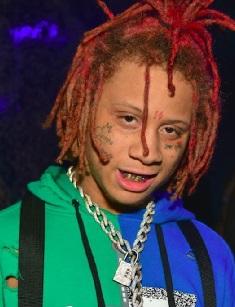 Trippie Redd’s real name is Michael Lamar White IV. He is the native of Canton, Ohio, small town, which population is about 70,000 people. He was born there in 1999. Nowadays, he is a well-known rapper. Trippie recorded his first songs at the age of 15, but they were not successful. He started his professional music career in Atlanta after high school graduation. His top songs are “POLES1469”, “Woah Woah Woah/Crash Bandicoot And Chill”, “Qs&Ps”, and "Dark Knight Dummo”.

Trippie Redd has only one studio album, called “Life's a Trip”. It was released in 2018. Trippie Redd is the owner of the online clothing store (1400brand.com). His net worth is about $7 million.

Like many other famous rappers, Michael Lamar White IV was born in the incomplete family. His mother, Tonya White, brought up him and his brother Taevion Williams. Their father was in custody at that time. White was born on June 18, 1999. He spent his childhood in Canton, the state of Ohio. White studied at the local school and was good enough in it.

Tonya White was forced to work hard to feed the boys. However, she couldn’t warn White against the influence of the streets. As a kid, he started drug peddling and committing petty crimes. At the same time, White began interested in music. His mother often listened to different rappers, such as Travis Scott, Drake, The Weekend, Tyler, The Creator, 2Pac, Lil Wayne, T-Pain. White liked them. Also, his elder brother, Teavion, made music and performed by the stage name Lil Tae.

He was a source of inspiration for White. However, Teavion died in 2014. He got into a car accident and was not able to survive. That fact changed White’s life. He decided to continue his brother’s occupation. Later that year he and his little cousin Nigel released their first songs and uploaded them to the Internet. The boys called them "New Ferrari" and "Sub-Zero”. It was an unsuccessful experience, and White deleted them soon.

White graduated the Canton’s high school, obtained a GPA score of 4.0. He wanted to start the professional music career and moved to Atlanta, Georgia, where he met a well-known rapper Lil Wop.

Trippie’s move from Ohio and acquaintance with Lil Wop were the first steps in the world of serious music. Wop became his teacher and revealed to him all the secrets of rap. In collaboration with Kodie Shane, they started recording their first songs. So Trippie first appeared in the studio. He took part in three successful albums, which were released with the titles “Beast Most”, “Awakening my Inner Beast”, “Rock the World Trippie”. Thanks to those albums Trippie was noticed by several production companies. He signed a contract with one of them and moved to Los Angeles.

On May 12, 2017, Trippie issued his first mixtape “A Love Letter to You”. It became his first release to chart. Trippie decided not to stop on one mixtape and later issued its sequel “A Love Letter to You 2”. His style was compared to the form of Uzi. However, White was annoyed by this comparison, saying that it was like they were low-key kind and had the same cadence, but not. They made total opposite music, he didn't even make music like Uzi. He made crazy shit. Uzi just then was making a song that related to his life.

Thanks to the mixtape’s songs Trippie became the regular member of large music charts. However, his first appearance on the US Billboard Hot 100 was only in 2017, when he released his famous song “Dark Knight Dummo” featuring Travis Scott, one of his favorite rappers. This track was the lead single from his only studio album, which was issued on August 10, 2018, and was called “Life’s A Trip”. It consisted of 14 tracks. The first single was “Together”. Its lyrics told about friendship and unity. In the intro, Trippie wanted to say that humans are stronger together than when they are alone.

Except for Travis Scott, the debut album included other famous rappers, such as Diplo and Young Thug. Trippie announced the appearance of Lil Wayne earlier, but he was not there. The critics estimated “Life’s A Trip” low enough. According to them, Trippie’s music had no fresh sound, and all his singles were very personal. Despite this fact, the amount of selling copies said that people liked his new album. Thanks to the album’s success Trippie got a chance to play a very small role in Hulu commercial during the 2018 Emmy Awards. They ran new "Never Get Hulu" campaign, where such celebrities as James Harden, Sarah Silverman, and others urged people not to ride first class. Trippie appeared in the background of the commercial, sitting courtside at a basketball game, while Harden was calling people not to get a king-size bed.

On September 3, 2018, Trippie Redd posted a song’s fragment on his Instagram. He urged fans to comment the video 70,000 times if they wanted him to release the song. A few days later, he deleted the post with the song and music video. It was released only on November 9, 2018, called “Loyalty Before Royalty”. It became the 12th track on his third mixtape “A Love Letter to You 3”. It became the highest entry of Trippie. The mixtape debuted at number three on the Billboard 200.

2018 was also the year of a lot of concerts and music festivals, where a rapper performed. His appearances are always remembered. Trippie Redd made a guest appearance at the 2018 Coachella Music and Arts Festival on Friday playing on TDE artist SZA's set. On the 2018 Rolling Loud Festival in Miami, the rapper put on the neck a chain with bones and links, covered by 20,000 diamonds. Its price was about $500,000.

Trippie Redd started 2019 in a tight schedule. In February he took part in a concert at The Fillmore Silver Spring. Six days later he performed at The Strand Theatre, the tickets on which were ones of the hottest on winter’s market. One week later Trippie showed a talent that is not always found in the most seasoned of performers. At the Myth Live, he immediately won the audience’s support and sang his main tracks. On March 10, 2019, he appeared at the Norva concert in Norfolk. And in April he performed at FSU free, on-campus festival for college students as a featured artist.

Trippie Redd had some disputes with well-known rappers, such as 6ix9ine and XXXTentacion. 6ix9ine and Trippie recorded a song together in 2017. Later 6ix9ine was accused of pedophilia and White publicly backed those charges. Both rappers supported the conflict through social networks. First Trippie was beaten in a New York Hotel. In 2018 6ix9ine was also hit. Both accused each other in those doings. They are still in conflict for various reasons.

The feud between Trippie Redd and XXXTentacion can hardly be called serious. Onfroy supported 6ix9ine in their conflict with Redd. But soon apologized for it and White and Onfroy reconciled.

On Trippie Redd’s Instagram, there was information about his dating with rapper Aylek$. In 2017 he claimed that his net worth was about $7 million. He managed to buy a house for his mother. Its price was $300,000. Like many other young rappers, Trippie has a lot of tattoos on his face. It is a new rap’s fashion.

In the interview, Trippie said that people didn’t understand that he was really crazy, like a savage. Also, he wants his music to be timeless. He wants to get Grammys and billboards. He aims to become one of the best rappers to set an example for future performers.

Despite the young age, in the discography of Trippie Redd there are one studio album, eight singles as a lead artist and five as a featured artist. He also recorded three mixtapes and seven extended plays.