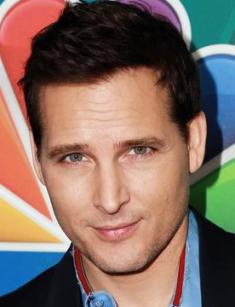 Peter Facinelli is an actor, producer, and screenwriter who has not been involved in scandals and intrigues like the majority of his Hollywood colleagues. The artist earned international recognition for the Twilight franchise and the series Fastlane.

Peter Facinelli was born in Queens, New York. His mother was American and brought up four kids; his father, an Italian migrant, worked as a waiter. Peter was the youngest child and had three elder sisters.

The handsome brunet was noticed by directors quickly. Peter debuted in the dramas Angela and Foxfire; the latter project starred Angelina Jolie who was not much famous at that period. The comedy The Big Kahuna with Kevin Spacey and Danny DeVito followed.

When the 1998 melodrama Can't Hardly Wait was released, people began to see Facinelli as somebody greater than the actor playing youth icons. After the artist participated in the sci-fi thriller Supernova and the drama Tempted, he gained the part of Takmet in the fantasy action The Scorpion King by Chuck Russell. Dwayne Johnson and Michael Clarke Duncan appeared in the project as well.

More and more people noticed the artist. The role of the police officer close to the edge (Fastlane) brought a new wave of success. Soon, Peter expanded his filmography with Hollow Man 2 with Christian Slater; it was the story about the blind mountain climber who reached the top of Everest. That period was also marked with the TV series Six Feet Under and Damages; the former brought the actor the nomination for Screen Actors Guild Awards for Best Ensemble in Drama.

Glory, crowds of fans, endless photo shoots, and interviews – this is what Peter got when the first part of the popular book adaptation Twilight. Facinelli personified the head of the Cullen family and Edward’s (Robert Pattinson) stepfather. It is interesting that Facinelli did not like the idea of starring in the project and declined the offer. However, the agent gave him Stephenie Meyer’s novel.

It took the actor one night to read the book; he realized that Twilight was more than a so-so horror. His character appeared in all parts of the movie; the project grossed more than $2 billion worldwide.

At the same time, Facinelli was working on Nurse Jackie, the drama series with black comedy elements. His character, Dr. Fitch Cooper, was active and eccentric, unlike noble Carlisle Cullen. The artist had to fly by plane every week, yet he liked it, despite the tiredness. The series earned five Emmys and had five nominations for the Golden Globe, as well as other prizes.

In 2009, the man founded the producing company FacinelliFilms. The crime comedy Loosies not only brought the lead part: Peter created the script and produced it. While critics’ reviews were mostly positive, the project did not enjoy high ratings. Michael Madsen and Jaimie Alexander participated there.

In 2013, the actor received the lead part in the mysterious horror The Damned about a witch living in the modern world. The next year, the artist joined the cast of the action Freezer about the Russian mafia; he collaborated with Dylan McDermott, Yuliya Snigir, and Rafael Petardi. In 2015-2016, Facinelli played in the DC-comics-based series Supergirl about Superman’s cousin.

After Twilight, the actor was frequently going out with Elizabeth Reaser who had played his character’s wife. Still, nothing but rumors followed.

The artist met his future wife, the actress Jennie Garth, at the movie set of An Unfinished Affair; the woman was undergoing through the divorce. In 1997, the couple’s daughter Luca Bella was born; her parents married four years later. 2002 and 2006 were marked with two daughters’ birth: Lola Ray and Fiona Eve.

In 2012, Facinelli filed for divorce due to irreconcilable differences.

The next four years, fans were watching Peter’s romance with the actress Jaimie Alexander. In March 2015, the celebrities got engaged but split up the next year. Rumors had it the couple could not save the relationship from a distance, yet they remained friends.

In fall 2016, the romance between Facinelli and Lily Anne Harrison, the daughter of Gregory Harrison, was revealed. The woman posted their picture on Instagram. In comparison, Peter’s page includes photos and videos with his kids.

The actor supports Alex's Lemonade Stand Foundation that helps children with oncology; he says he is ready for anything to do charity work better. Besides, Peter is a coach of his daughter Lola’s soccer team.

Facinelli would like to try himself as a director: the man believes he is a good storyteller.

In 2017, two projects with Peter Facinelli came out: the crime drama Gangster Land and the comedy The Wilde Wedding with John Malkovich, Glenn Close, and Patrick Stewart.

Gangster Land is set in Chicago in the 1930s; the audience can watch the first steps and the enhanced authority of Al Capone’s group.