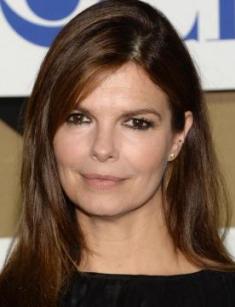 Jeanne Tripplehorn is an American actress, whose filmography consists of mainly supporting roles in movies and television series. The actress became known for such projects as Basic Instinct, The Firm, Criminal Minds, and others. Among her awards, there are no high-profile nominations or prizes, but at the beginning of her creative career, Jeanne was nominated for the Golden Raspberry booby prize.

Tripplehorn also works on stage. Among the characters which she played on the Broadway stage, the audience remembers her role of Masha in the production of Anton Chekhov's play "Three sisters."

Jeanne Tripplehorn was born in the U.S. state of Oklahoma in 1963. Her parents were creative people, which partly formed the girl's worldview. Her father was the guitarist of the musical band called Gary Lewis & the Playboys. This had a significant influence on little Jeanne, who became interested in music. For some time, she tried to develop herself in this direction. In her youth, the future actress worked as a DJ on the radio station under the stage name Jeanne Summers.

The Tripplehorn family had two children. Jeanne grew up with a brother, who also dreamed of having a creative profession. Unlike his sister, he became a musician, and now he works as a drummer in rock bands. The young man tried himself in the film industry as well, but he failed to get a serious role.

Deciding to try her luck in the acting field, Jeanne began with the conquest of the theater stage. After playing a few minor roles, the girl started to try her hand at the local television, and she was lucky. At first, the actress managed to get only cameo roles, but soon producers started paying attention to her, and more meaningful works appeared in the filmography of the girl.

Among the debut roles of the actress was the role of Beta in the movie Basic Instinct. Jeanne worked on the same set with Sharon Stone and Michael Douglas, which in itself could be considered a success.

In 1993, she received an invitation to participate in the filming of the television series called The Firm. Tripplehorn got the part of the wife of the central character, who was played by Tom Cruise. The motion picture won critical acclaim, but the work of Jeanne did not receive any praise. At the same time, actress Hall Hunter received several awards as the Best Supporting Actress.

In 1995, Jeanne starred with Kevin Costner in the movie Waterworld. Gradually gaining popularity, the actress increasingly appeared on the screen in the company of Hollywood celebrities. In 1997, she managed to get the leading role in the film 'Til There Was You. At the same time as working in the film industry, Jeanne was looking for opportunities to debut on television. She starred in The Ben Stiller Show, as well as in the project Mr. Show with Bob and David.

In the 1990s, the actress got a part in the movie Sliding Doors, on which she worked together with Gwyneth Paltrow, as well as a role in Very Bad Things, on which Leland Orser became her on-screen partner. Tripplehorn got the central part in the project Mickey Blue Eyes. On this movie, she got the opportunity to star together with Hugh Grant.

The year 2000 was marked by her participation in the film Timecode. It was an unusual experience for Jeanne, as the role was uncommon for her. On the screen, the actress got into the character of Salma Hayek's mistress. Together with Jessica Alba, she participated in the filming of the movie Paranoia, and in 2002 starred in the film directed by Guy Ritchie, Swept Away, on which she worked with Madonna.

Jeanne's talent was not appreciated in the world of the big screen. For some time, she tried to find herself on television. In 2006, a new chapter began in her creative biography, which was marked by the project Great Love. Tripplehorn starred in this series until 2011. Her work on television did not kill her interest for the big screen, but Jeanne was not so popular in this field.

In 2008, the actress starred in the film Winged Creatures. And again, she got a supporting role. In 2009, the movie Morning and the television series Grey Gardens saw the light of day. In the latter, Tripplehorn portrayed Jacqueline Kennedy Onassis and was nominated for an Emmy as best supporting actress.

Then came the TV series New Girl, and in the period from 2012 to 2014, Jeanne was among the cast of the cult project Criminal Minds. After leaving the show, she gave way to Jennifer Love Hewitt.

Jeanne's creative biography is full of versatile characters. She starred in comedies, action movies, and thrillers, demonstrating the dramatic potential and ability to transform. Fate was not always fair to her. Thus, the actress claimed the title role in Pulp Fiction, but Quentin Tarantino chose Uma Thurman over her. Jeanne managed to get a part in The Firm television series because of the pregnancy of Robin Wright, who claimed the role of the wife of the central character.

Jeanne Tripplehorn was engaged to comedian Ben Stiller. The romantic relationship did not come to marriage, the lovers parted.

The celebrity gained happiness in the personal life, having created a family with the director and scriptwriter Leland Orser. Their wedding took place in 2000. After two years Jeanne bore her husband a son. The boy was named Augustus.

Jeanne Tripplehorn's net worth is estimated at $12 million. In 2019, the career of the actress came to a lull. Directors don't pay much attention to the actress, but Jeanne is not discouraged and happy to participate in small TV projects. Tripplehorn gives interviews to the media and remains a public figure.

The actress has a personal account on Instagram, where she publishes personal photos and pictures of everything that attracts her attention. In her profile, one can find a photo of the actress in a swimsuit. Jeanne has an attractive body, her height is 5 feet 57 inches, and she weighs 138 pounds.