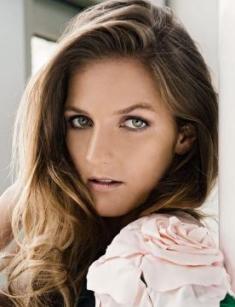 The tennis star Karolína Plíšková is proud of her powerful serve, and her long arms and legs help her perform it. The athlete is nicknamed “Queen of Aces”, and the whole Czech Republic loves her.

The twin girls Karolína and Kristýna were born on March 21, 1991. The parents, Radek Plíšek and Martina Plíšková, lived in a little town, Louny. Although Radek was accused of cigarette piracy, he did his best to provide his daughters with every opportunity to develop their tennis skills.

The twins debuted in the court at four; when they turned ten, the family moved to Fallersleben. Kristýna and Karolína began to work with the coach, and Karolína created her training plans the next year.

The 15-year-old athlete realized that a hardcourt suited her skills perfectly; this surface remained her favorite even ten years later. Plíšková’s first professional match happened in 2016 in her home country.

In 2010, the young woman won her first significant tournament, and became number one in Australian Open; she was included in the top ten players among juniors. The next year, the sisters decided to try themselves in doubles. They proved to be a success: the victories in Vancouver and, in 2013, the Generali Ladies Linz followed. The athletes became the first twin sisters winning WTA.

While the women’s sizes and skills are almost identical (they even wear the same shoe size), Karolína was second in their duet. Since 2011, she had been trying to reach the top but failed: Wimbledon games and French Open brought defeat in the first round.

Things changed in 2013: the sisters parted in their careers, even though their official website still shares the information about both athletes’ achievements. The same year, the younger Plíšková won the first victory in the professional tournament for adults.

The final game in Kuala Lumpur was beneficial for Karolína: she surpassed Bethanie Mattek-Sands and took the long-awaited cup. The next year, the woman gained two WTA titles and an impressive victory at the US Open where Karolína crashed Ana Ivanović.

Colleagues recognized the player as a strong opponent. Plíšková and Andy Murray exchanged funny barbs on Twitter: the man praised Karolína’s powerful ace but emphasized she lacked speed. In reply, the athlete said Murray could also use some speed.

It is difficult to see Plíšková’s emotions. As she told journalists, she is an introvert and puts all her feelings to sports achievements rather than showing them.

In October 2016, the player defeated Garbiñe Muguruza at the WTA Finals in Singapore; the match lasted for two hours and 30 minutes. Further on, fans witnessed the sudden loss to number 22 Anastasija Sevastova at Mutua Madrid Open and left the competition after the second round.

People forgot the misfortune when Plíšková defeated Serena Williams herself: the Czech athlete forced her opponent from the semi-final at the US Open. Soon, Karolína won the second Fed Cup in the last two years. It was a challenging battle: Plíšková and the French athlete Kristina Mladenovic kept playing for four hours.

By June 2017, Karolína’s status improved significantly: she became number three in the world. The victory over Simona Halep made her the leader. Plíšková learned the news on June 11 but did not relax and continued to compete to consolidate her position.

In October 2017, Karolína’s crew got larger: Barbora Strýcová’s coach, Tomáš Krupa, started collaborating with her. The same month, the athlete met with Venus Williams; bookmakers saw Karolína as the favorite. It happened precisely so: the game lasted for an hour and 14 minutes and finished with Plíšková’s triumph.

Introverted Karolína does not talk about her romances. However, the whole world was watching her relationship with Michal Hrdilicka. The Ice Queen’s boyfriend worked as a sports commentator at TV Nova.

The young people had known each other for a long time and began to go out together in 2016. Those who knew Karolína were more than surprised: the man was entirely different from the calm, phlegmatic woman.

The couple had to go some challenges after Wimbledon: while the athlete was participating in the tournament, the commentator went off on a drinking binge. The paparazzi took pictures of him and posted them in newspapers; Karolína was furious and deleted all their photos on her Instagram. However, she forgave her messed-up boyfriend in a couple of months; the lovers got engaged in 2017 and married in summer 2018.

In February 2018, the competition in Dubai was disappointing for Karolína: she lost to number nine Angelique Kerber. Plíšková did not even reach the semi-final of the tournament.

In April, the athlete rehabilitated and won the WTA Porsche Tennis Grand Prix, facing the American CoCo Vandeweghe. It was an easy victory for Plíšková. The prize fund was $750 000. Fans were also glad to see the triumph over Jeļena Ostapenko in the semi-final.

On May 9, 2018, the athlete surpassed Sloane Stephens and got to the quarterfinal of the tournament in Madrid. On May 16, she had a conflict with a referee during the game against Maria Sakkari. Karolína did not agree that she had an out and hit the referee’s stand after the match.

The athlete likes to fish: it is a wonderful opportunity for her to relax without fans’ and journalists’ attention. Unfortunately, she cannot allow herself to do that often: the woman enjoys it once or twice per year.