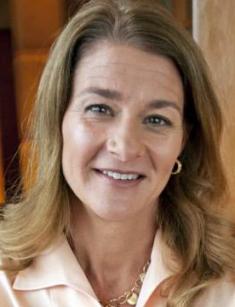 Melinda Gates is a philanthropist, a business lady, the wife of America's richest entrepreneur Bill Gates. The beloved of the founder of Microsoft Corporation, she is one of the most influential women in the world.

Melinda Ann French was born on August 15, 1964. This momentous event took place in Dallas, in the family of Raymond Joseph French Jr., an aerospace engineer, and Elaine Agnes Amerland, a housewife. Besides Melinda, there are three children in the family, two younger brothers, and an older sister.

The family had a small business: they rented out houses, and their children helped as they could, cleaned the rooms, calculated expenses, and revenue.

The girl received a strict Catholic but at the same time brilliant education. She first studied at St. Monica Catholic School, from which she went on to study at Duke University, a prestigious private institution in North Carolina. In five years of studying, Melinda managed to get a Bachelor's degree majoring in two subjects at the same time: Economics and programming, as well as an MBA. The girl reduced the study period to three years to be able to start climbing the corporate ladder quicker.

According to Melinda's sister, Susan, the future businesswoman always knew what she wanted and firmly moved towards her goals.

In her youth, Melinda Gates was good-looking, as it could be seen from her old photos in the photo collections of the Gates. However, this strong woman retained an attractive appearance to this day. Despite this fact, it was not her appearance that attracted the attention of Bill Gates, but her mind and the iron grip of a true businesswoman.

In 1987, Melinda got herself employed at Microsoft on the advice of a friend. He told the promising young lady to note this rapidly growing corporation. As a result, Melinda got a position there, and her post was as high as the head of the sales department. She was responsible for multimillion-dollar contracts for such products as Encarta, Publisher, Microsoft, Bob, and Expedia. Melinda became the leader of the staff consisting of hundreds of employees.

Four months later, the businesswoman who ran up the corporate ladder meets the head of the company, Bill Gates. This meeting happened by chance at one of the press briefings in New York. It is said that first of all, Bill noted not the appearance of the girl, but her brilliant mind, which he discovered by an empirical method.

According to some psychologists, there is a direct correlation between the intelligence of a woman and the height of the heels she wears. Allegedly, the lower the heels on women's shoes, the smarter is their owner. It is a somewhat controversial statement, similar to those that see a connection between beauty and nationality. However, in the case of Melinda, the statement was true: the girl wore low-running shoes and was exceptionally smart, as Gates soon found out.

In 1996, Melinda, who by that time acquired the last name Gates, resigned as the head of information products department and got engaged in charity projects within the activity of their joint fund with Bill. The fund itself was established in 1994. In 1999, it was renamed Bill & Melinda Gates Foundation. Another legendary American, Steve Jobs, took part in the creation of this new project. By this time, the conflicts between Gates and Jobs were forgotten.

Now Melinda is not only the wife of the wealthiest American, whose fortune is estimated at $75 billion. Melinda Gates has a net worth of $70 billion. She is one of the most influential women in the world, the co-founder and the co-chairwoman of their family's charity fund. Leading political and business leaders of various countries carefully listen to her opinion.

In numerous interviews, Melinda Gates does not share the details of her personal life nor gives out recipes for family happiness. She is still determined and ambitious; the only difference is that now the goal of the businesswoman is not the increase in sales. Today it is charity and provision of help to the population of the third-world countries, and especially women.

The Bill & Melinda Gates Foundation is the world's largest non-profit organization that is based on private investments. It has an entirely transparent scheme of its activities, and at the same time, all the monetary processes with its participation are exempt from taxation. Within the framework of charity programs, the Foundation assists the inhabitants of the African continent, providing them with free vaccines and medicine.

In 2012, Melinda, as a Catholic believer, committed a single act that caused the condemnation of the official Vatican. She openly stated that she would devote the rest of her life to creating a system of affordable contraception for women in the third world.

Unfortunately, this noble impulse was questioned after the speech of her husband, in which he stated that reducing the world's population, and in particular, the poorest layers of it, would contribute to solving the problem of overpopulation and global warming. With that in mind, her efforts related to the promotion of contraception in Africa and forced vaccination, which Europeans have dismissed long ago, do not seem so glorious.

Even though Melinda met Bill back in 1987, they got married only seven years after their first meeting. Bill was always a confirmed bachelor, and his relatives considered it a miracle that Melinda managed to steal his heart and make him love her so much that he would dream of marrying her.

The wedding ceremony was held in Hawaii, among a close group of relatives and friends. Gates bought all the tickets for charter flights so that none could disturb the young couple. The newlyweds went to Alaska on their honeymoon, preferring thirty-degree frost and dog sledding to the hot climate of exotic Islands.

The couple settled in a mansion on Lake Washington near Seattle. There is a vast parking zone for thirty cars, a trampoline, a swimming pool, a private cinema, and a Golf course.

At present, Melinda's net worth is estimated at $70 billion.