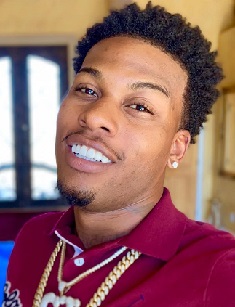 CJ So Cool (real name is Cordero James Brady) is a famous American YouTube star. Being popular for his quick and hilarious reactions to YouTube videos and for his pranks, CJ has a phenomenal 1.8 million subscriptions on his account called ‘CJ so Cool.’ He is one YouTuber who does not hold back on his comments! Let’s emerge more in his biography!

CJ So Cool was born on March 29, 1989, in Indiana, the United States. As a child, he took up summer jobs to help support his family. He has a younger brother, Jinx, also a YouTuber, who has helped him shape his career and improve the quality of his videos.

Having graduated from high school, CJ joined the Navy and spent two years in the Presidential Guard. He was honorably discharged.

Before CJ So Cool decided to dedicate himself to YouTube fully, he worked as a blackjack, a poker dealer and as a casino craps dealer. He took up full-time work on YouTube after he gained a large number of subscribers.

CJ So Cool created his first YouTube account when he was a high school student. He uploaded there videos about his daily life, such as «First Day of School,» made tours inside his house. Also, at the beginning of his YouTube career, CJ tried out writing lyrics, songs and creating music for the videos. In spite of his efforts, the channel didn’t work for him. Young celebrity hardly received 35,000 views and not many subscriptions. However, when his younger brother took note of improving the content on his page and increased the quality of his videos, CJ rose to stardom in 2014. He began by only reacting to videos and later began uploading ‘Try not to laugh,’ ‘Try not to sing,’ ‘prank videos,’ videos he has made while travelling to Atlanta, Chicago, Detroit, Jamaica and other comic videos. Besides, CJ So Cool collaborated with his brother ‘Jinx’ and ‘Royalty,’ girlfriend whom he later married. He also became a vlogger with the growing popularity and began uploading weekly vlogs and challenges with his family.

However, during his rise to fame, he also received plenty of criticism (as it is usually the case), though less than his brother. A few viewers began a signature campaign to remove his account after he posted a video where he mixed laxatives in Royalty’s children’s ice-creams and then joked about their diarrhea and pain. Many viewers found this offensive and criticized the work, because of which his wife had to give the viewers an explanation and YouTube took quick action to remove the video as it had content against their policy.

CJ knows how to grab the attention of his viewers. Though there are many YouTubers who disagree with the content posted by CJ and openly criticize him, yet he is recognized and is watched by many people. After realizing the mistake he had made by posting content which was controversial, he has limited himself to making only vlog and challenge videos. His most recent video where he gives food to homeless people was appreciated by many fans and helped cool off the heat he was subjected to owing to the discontent from a couple of his prior videos.

His YouTube account got hacked in 2015, and all his videos were erased. So, he had to begin from scratch and upload new and old videos once again. He has a couple of enemies on YouTube, who claim his videos to be inappropriate. Yet, he remains unaffected and continues to keep his viewers entertained with fresh videos every week.

In his career, CJ has also been accused of stealing videos.

CJ’s net worth is evaluated at $4 million. Doing his hobby, he makes huge amount of money per year.

Speaking about his relationship, CJ is married to his long-time girlfriend Royalty, and the two of them live together in Las Vegas. Royalty has three children from her previous relationship. CJ became their stepfather.

Royalty Johnson is an American Instagram star and entrepreneur. Primarily known for her frequent appearances in her boyfriend’s content, she has managed to accumulate fame on her own as well. She has 1m followers on Instagram. Johnson grew up in Las Vegas, Nevada and first came into the limelight with CJ’s video ‘I Pushed Your Kid April Fools Prank!’ After the video went viral, it catapulted both her and CJ into unprecedented internet fame. In July 2015, they recorded a reaction video together titled "Best of KingBach Vine Compilation Reaction."

CJ has a daughter named Camari from a previous relationship. He pays child support and in exchange, enjoys a close relationship with his kid. However, in 2017, Camari’s mother accused him of being neglectful of his duties as a father, and Camari was briefly taken away from him. Furthermore, Royalty Johnson was accused by CJ’s fans of being the reason behind this situation. She was called, among other things, an opportunistic gold digger. Both she and CJ vehemently denied the allegations.

Besides working on YouTube, CJ is also keen on tattoos. He has a lot of tattoos over his body. He wears appropriate clothes to show off his tattoos. He is also crazy about his sneakers and shoes. Once, the celebrity mentioned in a video that he was addicted to YouTube, and it run his life.

According to him, if it weren’t for his viewers, he wouldn’t have achieved this much success, and therefore to keep his viewers entertained and to make sure they don’t forget him, he is glued to uploading new videos.

CJ So Cool has an estimated net worth of $4 million.