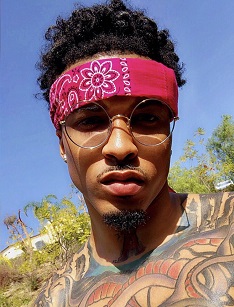 August Alsina (full name is August Anthony Alsina Jr.) is a famous American recording artist born in New Orleans working for Def Jam Recordings. The musician is mostly known for his songs «I Luv This Shit» recorded with Trinidad James, «Down Right Now», «Down On Your Luck» (feat. The Gemini), «For You» (feat. Keith Sweat), «In Your Hood», «Set It Off.» August's debut album was released on April 15, 2014 – it is called «Testimony.»

August is living proof that your past doesn't have to dictate your future, and that life's ordeals can be the motivation required for success. Let’s know more about August Alsina’s way to fame!

August Alsina's birthplace is New Orleans, Louisiana, the United States. He was born there on September 3, 1992. As a teenager, he studied at a local school in New Orleans. Interestingly, nobody in his family was musically prone. Little Alsina became interested in music, rap lyrics and performing at an early age. He was inspired to sing by Lauryn Hill in Sister Act 2.

As a child, August Alsina got through his parents' divorce. In 2005 his mother, father and stepfather battling addiction moved Alsina to Houston, Texas in search of a new life after Hurricane Katrina in 2005. For years a young August endured a home life with drugs and violence. At just 14, he got news from New Orleans that his father, August Sr., lost his battle with drugs and alcohol. In 2007, when he was 14, trying to escape from reality, August published his first video on YouTube starting with a cover of «Hypothetically» by Lyfe Jennings. Later he posted dozens of homemade performance videos. His clips covering Musiq Soulchild, Lyfe Jennings and others went viral, generating millions of views in just over a month. It seemed that he was finally taking his first steps toward a bright future in music.

Once Alsina argued with his mother and was «kicked out.» Alone, he returned to New Orleans and took to the streets, selling drugs to earn a living. With his elder brother also in the streets hustling, it wouldn't be long before August learned that the addiction to money could be as deadly as the addiction to drugs. In 2010 August faced a horrible tragedy - his brother, Velvin LaBranch, was shot and killed on August 31, 2010.

After the accident, August decided to dedicate himself fully to music, gave up making videos for YouTube and moved to Atlanta in 2011 under the guidance of Noontime Unlimited (management and production company.) So, his brother's death became his motivation not to become a statistic, but to pursue his musical aspirations on an entirely new level.

So, August learned at an early age that drugs and money could make you, or break you.

2012 is called to be the start of August Alsina's music career. So, in April 2012 he released his first serios work - mixtape «The Product.» He teamed up with Hoodrich/MMG's own DJ Scream for the release of the project. «The Product» spawned the internet and radio buzzing anti-love single, «Sucka» which features fellow New Orleans crooner Lloyd.

Earlier, in October 2011, the musician published mixtape called «Untitled» with six acoustic covers. 2013 was marked by releasing of musician's single «I Luv This Shit» with Trinidad James - it was published in January. In May the singer pleased fans by mixtape «The Product 2.»

On August 20, 2013, August Alsina added the EP «Downtown: Life Under the Gun» to the list of his works. The following month musician's fans could watch a video for «Hell on Earth.» On December 9, 2013, the third single from his EP «Downtown: Life Under the Gun», «Ghetto» recorded with Rich Homie Quan, was serviced to urban contemporary radio and it was the most added song on urban radio the week ending December 12, 2013.

On January 14, 2014, the lead single from Alsina's debut album «Make It Home» was released. The song was recorded alongside Jeezy. That time the artist announced the name of his upcoming album – «Testimony.» The project was released on April 15, 2014. August Alsina was named part of the 2014 XXL freshmen class.

The same year, Alsina embarked on a tour as a support for his album «Testimony.»

On December 11, 2015, Alsina's second studio album «This Thing Called Life» was published. The collection got to the No. 14 on the Billboard 200. Its sells level was evaluated at 41 000 copies in the first week in the United States. «This Thing Called Life» included such top songs as «Hip Hop,» «Why I Do It» (featuring Lil Wayne), «Song Cry,» «Been Around the World» (featuring Chris Brown and Be) and «Dreamer.»

August Alsina released a remix of Kehlani's track «Nunya» in March 2019, accompanied by a music video in which he illustrates his relationship with a woman who's rejected him but is still trying to keep tabs on his sex life. Rumors have appeared recently that in the song Alsina tells about Jada Pinkett Smith, who the singer has had a close relationship with over the years.

Alsina’s net worth is evaluated at $4 million.

August Alsina has a little daughter, named Amaiya, whom he calls her princess. However, August is not her biological father in real. Amaiya is actually August's niece, daughter of his deceased brother Melvin LaBranch III, who was shot dead in 2010. Generally, Melvin had 3 children.

At the beginning of his career, August Alsina was linked romantically with Nicki Minaj. Soon, the news of them seeing each other romantically became the most discussed issue in the media. Their followers even confronted the two regarding the matter on Twitter during their one of Q&A sessions, where both August and Nicki personally replied to the fan's outrageous questions.

However, later the gossips disappeared.

Apart from Nicki, August was also frequently seen on Keke Palmer's Instagram. The duo often appeared together and seemed very close to each other back in 2015. As most fans were assuming the duo to be dating, their thoughts were shattered when Keke released a statement denying it.

While an interview in July 2015, Keke denied being August's girlfriend. She clearly explained the duo shared the friendship and were nothing more than friends.

A year later, in 2016, August was linked romantically with the model Miracle Watts. Even though the couple insisted on them not being in a relationship, the pictures on that surfaced the media were seemingly telling a different story.

It was revealed that the pair visited a zoo together and later, shared pictures of their day together on Instagram. Both August and Miracle was intelligent enough not to mention each other on their social media post.

After a series of dating rumors, August finally came with his dating life as he seemed to have found a person he dearly adores. Back in July 2016, August quoted the famed actress, Regina Hall as «the love of his life.»

He even made his love evident to the social media world after he posted a video on his Instagram, where he came face to face with his love, Regina. In the video, Regina was heard giggling and blushing in the back, prior to appearing on the screen.

Adding to it, August was quite serious in dating with Regina as he was looking forward to making her his wife. He clearly said, «gonna get married too.»

Remarkably, before the time could take its course, August was rumored to dating Jada Pinkett Smith's mom, Adrienne Banfield-Jones in April 2017. August seemed fairly close to the family of Smiths and event went on a date with Adrienne.

Recently Alsina released a song «Forever And A Day» which managed to become a real hit in several weeks.

He later posted a picture captioning "Date Night" and a heart emoji.