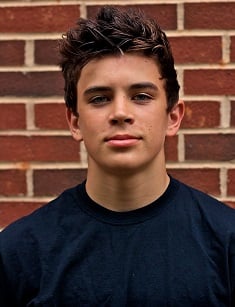 Hayes Grier is a popular American Internet blogger. He came to glory after shooting short videos on the application Vine. He has a YouTube channel with over 900,000 followers. Aside from making video content, Hayes shows up on TV. He was featured in the Netflix series Chasing Cameron. In 2016, he published the novel called Hollywood Days with Hayes.

Hayes is from a big family; he is the third child among four in his family. His father Chad Grier was a football coach. His mother's name is Elizabeth Grier-Floyd. When the boys began to publish Vine videos and started to gain popularity on the Internet, their father became worried that such an easy fame would work to the detriment to his sons. But now he provides support to his children and manages their career. (Photo of Hayes and Nash in childhood)

Grier's older brother Nash is also a social media star and famous Vine blogger. They are very close friends who make videos together and stand by each other throughout life.

Hayes studied at Davidson Day School in Davidson, North Carolina. As for now, it’s unknown whether or not he plans on attending college after his high school graduation.

As a kid, Hayes was a shy guy, and he felt uncomfortable to talk to other people. But when the Vine application appeared, he liked the idea of shooting short funny videos, and as he said in one of the interviews, he “came out of his shell.” It was the moment when he started to become increasingly popular among other bloggers.

Hayes published his first video in April, 2013. Hayes and Nash filmed a Vine video on a rooftop. Later, Tiffiny Semashko, a popular Vine star with a huge audience, made a repost of their video on her Twitter. She is considered to be the one who led the way to success for young boys. As for today, the number of Grier's videos is over 200.

Hayes creates videos where he is just having fun with his friends and relatives. He composes ideas for his pranks and challenges by himself.

Hayes has a Vlog on his YouTube channel with over 900,000 subscribers. He publishes simple but entertaining videos about his everyday life. A blogger cooks, travels with his friends and makes battles and parodies with other online celebrities. Hayes has a hobby: he rides a dirt bike and captures his dirt bike tricks on camera. On July 28, 2016, it was reported that Grier was involved in a dirt bike accident and was sent to the hospital. He had several broken bones but was released two days later.

Besides dance and prank vines, there are also Youtube videos that feature Hayes singing in Spanish. Fans find these videos amusing and cheer Hayes up with thousands of likes.

But in addition to the good reviews, Hayes received negative feedback. After some statements in his videos, Hayes and Nash were blamed for being sexist, racist, and homophobic. Boys decided to use a hashtag “#notaracist” to prove that they had never wanted to hurt people's feelings.

In 2013, the Vine star went to the initial Magcon touring group with other famous Internet influencers, where he had a chance to perform on the stage in front of his most ardent fans.

In 2016, Hayes Grier made his acting debut in the horror TV series Freakish, revealing why fans would see a totally different side of him. After two seasons the series was closed because they were considered to be too short for a television format.

In 2018, Hayes starred in reality series Top Grier, which was about sports, pranks and his relationships with relatives and friends.

Dancing With The Stars

At the age of 15, Hayes was the youngest male contestant to have ever been on the show Dancing With The Stars. On the 21st season Emma Slater, a professional choreographer, became his dance partner. The judges of the show were slightly confused about the Grieg's age. Despite his young years, Hayes was able to show his best qualities and dance abilities.

On October 26, the duo left the competition taking the 8th place. Although the results were not excellent, it was a great experience for a blogger to participate in such a serious show.

As for now, Hayes is single. In 2015, there were rumors that he was dating an unknown girlfriend according to the photo on the Internet. But later the picture was recognized to be fake.

The same year, he had been in a relationship with a dancer and actress Kalani Hilliker, but it didn't last long.

In late 2015, a Vine blogger dated a competitive cheerleader Jordan Griffis. There wasn't much information about their romance, but the two were seen arguing on social media. For unknown reasons, they broke up in March 2016.

Hayes is surrounded by successful and popular people. Tez Mengestu, a famous American Instagram star and model, is a close friend of the Grier brothers Nash and Hayes. They went on tour together and made several collaborations on YouTube. (Photo with Tez)

In 2014, Hayes took part in launching a clothing line, called United XXVI, with his brother and his friend Cameron Dallas. He also has a collection of crop tops with lettering, which became popular among his fans all over the world. (Photo from the fashion show)

Hayes Grier is known to be in good relationship with Brec Bassinger, an actress from the series Bella and the Bulldogs. In March, 2015, they made a joint video of their epic football battles.

In 2016, Hayes released his first book Hollywood Days with Hayes about his big Hollywood role in a blockbuster movie and a girl who fell in love with him. The novel became a huge success to a Vine star, who had already been basking in the rays of glory.

In 2018, Hayes was seen at Coachella, an annual music festival held in California, USA. There is a video on Vimeo, in which Hayes is captured with his friends. He wrote a note on his Twitter, in which he expressed his thoughts about the festival and promised to attend it next year.

Hayes communicates with his fans via his social networks. He can be proud to have almost 4 millions of followers on Twitter, over 5,5 millions of subscribers on Instagram and nearly 1 million fans on YouTube channel.

Grier's net worth is estimated at $3 million. Social media, contracts with famous brands and shooting on TV are the main sources of his income.