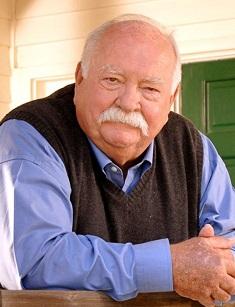 Anthony Wilford Brimley is an American actor, who has started his acting career from being an extra for Westerns. Brimley wears the iconic walrus mustache, and he cannot be imagined without the mustache. In 2005, Brimley won the Golden Boot Award for his work. Besides, he has promoted diabetes education, and he has appeared in related projects for Liberty Medical.

Wilford Brimley was born in Utah in 1934. There is no much information about his relatives, although, we know that he was a rather happy kid. Since childhood, Wilford has loved music, in one of his interviews, he tells that in his family house there was always good music. So now, he is a jazz singer who has recorded a few albums and performed in some clubs.

Brimley did not finish his education: he dropped out of high school and served in the United States Marine Corps during the Korean War. He spent there three years, and then came back. Wilford has worked as a rodeo rider, a blacksmith, and even a bodyguard for the businessman Howard Hughes. When Brimley returned to California, he started working at the company which provided horses for various movies. After that, in the 1960s, he began acting.

Brimley’s first steps in the acting field were a stuntman and extra. He was really good at riding a horse. After moving to Los Angeles, he found some work for himself and started acting in Hollywood Westerns like Bandolero! (1968). In that time, Wilford found a friend, the actor Robert Duvall, who encouraged him to become an actor too.

Brimley had enough estimated working hours as a stuntman, so he received the Screen Actors Guild card, and soon after that, he got some small parts in films like True Grit (1969) and Lawman (1971). In 1974, Wilford appeared on The Waltons, the popular television series, where he was starring in 1974–1977. This recurring role we can call Brimley's onscreen breakthrough. During that project, Wilford was noticed by another cast member, Ralph Waite, who invited him to the classes at his Los Angeles Actors Theater.

After getting some education, Wilford started getting larger offers. In 1979, The China Syndrome was released, and it was Brimley’s first feature film. At the end of this movie, Brimley’s character had an emotional soliloquy which caught the eye of various producers and casting agents. Then, he participated in various projects like Absence of Malice (1981), Tender Mercies (1983), The Natural (1984), and also in The Thing (1982), the cult film of John Carpenter. By the way, in getting into Tender Mercies, Wilford was helped by his friend Robert Duvall.

He convinced the film director Bruce Beresford to hire Brimley. However, not only Duvall had some kind of a conflict with Beresford but so did Wilford. During one scene, Bruce tried to advise Brimley on how his character Harry would behave, and the actor responded rather forthrightly that he was the one who should decide because he was Harry.

After that, the actor got his first leading role of Ben Luckett in Ron Howard's Cocoon (1985) alongside with Don Ameche and Hume Cronyn. This role emphasized Brimley’s gentler aspects, so he started getting more tenderhearted parts.

In the 1980s, Brimley started doing some regular series work. For instance, in 1986–1988, he starred in the family series Our House as a nice grandfather Gus Witherspoon among Deidre Hall and Shannen Doherty. Also, during that time, he appeared in several television commercials for the Quaker Oats cereal, which rose in sales after his appearance. Brimley has also appeared in some commercials for the Liberty Medical Supplies, the diabetes testing-supplies company, and since 1999 he has been the face of it. The actor found out about his own diagnose in 1978 and was honored to share his feeling and to speak out about this disease.

After his kind and sweet role in Our House, Brimley made an appearance of another nature in The Firm (1993) together with Tom Cruise. Wilford played a robust part of the head of security for the law firm. After starring in In & Out (1997), Brimley decided to work in more independent productions, not Hollywood. In 1997, he played the role of the US Postmaster General in one of the episodes of Seinfeld. After a few years of other independent films, Wilford starred in Did You Hear About The Morgans? (2009) together with Hugh Grant.

By the way, the actor was often mistaken for the trolley conductor in the 1991 Hardee's (now Carl's Junior) television ads for the Frisco Burger, because they look alike. And it is not the only person: Andy Reid, an American football head coach who is the same age as Brimley, is also often confused with him.

Brimley has a net worth of $6 million which he has been getting from his acting career since the 1960s.

As we said before, Wilford is also a jazz singer. His voice has always been described as "warm and rich." In 1993, he performed with the Cal State Northridge Jazz Band at some charity concert. In 2004, Brimley released his own album titled This Time, The Dream's On Me. In 2011, he surprised the audience and Craig Ferguson, the host of The Late Late Show, when Wilford performed a song “Oh! Susanna” during his appearance. In two years, he recorded a CD, “Wilford Brimley with The Jeff Hamilton Trio.”

Brimley’s first wife was Lynne Bagley, who he has met in Los Angeles, California. They got married on July 6, 1956, and lived together until Lynne’s death in June 2000. They had four children together: James Charles, John Michael, William Carmen, and Lawrence Dean, and also more than seven grandchildren.

When Wilford was with his Lynne, he met Beverly Berry, who was a wife of Robert Duvall's colleague. They all used to be friends, but it turned out that in 2007, Brimley and Beverly married each other. By that time, they both have lost their partners. In 2009, the pair founded nonprofit organization Hands Across the Saddle (HATS).

After being diagnosed with diabetes in 1979, Brimley started working to raise awareness of this disease. In 2008, The American Diabetes Association (ADA) gave Wilford an award for his lifetime of service. His talks about diabetes have become an internet phenomenon and a meme because of Brimley's pronunciation of "diabetes" as "die-a-bee-tus." He even has his own personage in the TV series Family Guy.