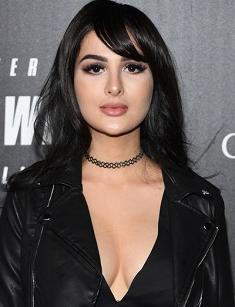 Alia Shelesh “SSSniperWolf” is a famous blogger and game expert. She has a multitalented nature and perfect physique. Besides, she is a true extravert and has the necessary entrepreneurial skills. All that made her one of the influencers of the growing generation.

All her childhood, she was crazy about playing video games. As a teenager, she enjoyed playing Metal Gear Solid and took her gaming name from this video game. YouTube star has a brother and sister. Her family is conservative and loving, where Alia had a good childhood. Later she and her family moved to America. She devoted all her time for gaming and developing her skills and hadn’t enough time for successful learning in high school. YouTube blogger didn’t attend university.

At the peak of her YouTube career, she was enrolled in a community college. But she could not focus both on career and education and discontinued the course. Parents always encouraged her interest, considering that gaming would help to develop her talents.

In 2013 Lia knew for sure that gaming is her cup of tea and opened her account. Her channel on YouTube became very popular among teenagers. She has over 10 million subscribers. Besides, she is active on Instagram, Twitter, and Facebook. She also registered on Twitch.

When her first channel proved to be an immediate hit, Alia put much effort and entrepreneurial skills working at her following projects. She advises how to play in video games and provides recommendations on female issues.

The blogger played various video games, Call of Duty and Art of Conquest among them. Pictures before disaster is a cap on her channel where the YouTube star gives funny comments about people on photos before some collapse. She recreated her favorite tik toks on her channel.

In 2017 she hosted the comedy series Clickbait, and was a guest on FANtasies “Ready to Kill.” Alia took part in commercial and shared his feelings on her channel. Lia was on Fear Factor where she had to swim with snakes.

Her immense success made her Internet star and gave her considerable fruits. Thus Alia won award Gamer of the Year on Nickelodeon. She has been included in TOP Influencers in Gaming Category by Forbes. By the way, Alia’s blogging activity has become a good business. She gathered a good fortune, her net worth is $3 million.

SSSniperWolf has a beautiful physique; that fact separates her from other game bloggers and makes her unique. The additional peculiar feature is her multitalented nature. She is a gamer, hula hooper, the girl is interested in various areas, beauty, domestic issues among them. The blogger cleverly uses her strengths and knowledge and attracts attention of different people.

Alia dated other blogger, Evan Sausage. Their love story started, when Evan Sausage sent Alia funny message that made her laugh; after that they started chatting all the time. Their relationship was rather serious; one day, they met and bought a house. In 2015 she confessed that the couple was going to marry. However, in May 2016 the young lady and Evan Sausage broke up but stayed good friends.

In 2017 the other YouTube star claimed SSSniperWolf in plagiarism. Azzyland told that she posted one video first, and then Alia posted it the second. Moreover, SSSniperWolf used the same text. There were much discussion about Azzyland and SSSniperWolf on Internet.