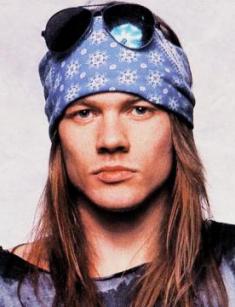 The soloist of the legendary rock groups Guns N’ Roses and AC/DC is known for his wild behavior on the stage. However, Axl Rose is a shy person in real life, and his story has been full of bright and sad events.

William Bruce Rose Jr. was born on February 6, 1962, in Lafayette. He was the eldest child in his dysfunctional family; the parents divorced when the boy was little.

Later, the mother married again. The step-father treated Bruce’s sister Amy and brother Stuart well. Somehow, he did not like the would-be musician: the boy had to take beatings from him. As a result, Axl Rose was pretty self-contained.

Five-year-old Rose and his siblings performed at a church choir as The Bailey Trio. When the future star was a teenager, he took fancy in rock music: it was similar to his childhood full of hardships. The hobby became the way to escape from reality. Soon, William realized he was good at singing. The young man practiced music diligently and created a group as a middle-school student.

By the 18th birthday, William learned that the man who had been bringing him up was not his biological father. He changed the hateful step-father’s second name to that of his biological parent, Rose. The name “Axl” came from the group that the young man listened to.

The singer’s relationship with legislation was troubled: he was arrested more than 20 times and finally decided to change his life. Thus, Axl Rose left his home city for Los Angeles to conquer the world of music.

Rose’s voice is unique: he has one of the widest vocal ranges, almost six octaves. The singer’s baritone is lower than Barry White’s but higher than Tina Turner’s and Beyoncé’s.

As the young man moved, he joined the group Rapidfire that split up soon. The artist formed another band, Hollywood Rose, with his childhood friend Izzy Stradlin. They recorded five songs at the beginning of 1984; the release took place in 2004.

Several recording companies noticed the young men. In March 1986, they signed a contract with Geffen Records; June of the next year brought the debuting album Appetite for Destruction. Although critics’ opinions were positive, the commercial start was slow: about 500 000 copies were sold within the first year. However, the supporting tour took place, and the album topped the American music chart twice.

The road to success was quite difficult: Axl Rose was secure about his vocal talent and insecure about himself. The musician managed to cope with the lack of confidence when he participated in unknown groups, but as soon as Guns N’ Roses proved to be widely popular, the artist felt uncomfortable on the stage. He even sabotaged shows and fled from concert halls, unable to make himself perform. Eventually, concert organizers began to lock the doors for the time of events.

Kurt Cobain, the frontman of Nirvana, often showed his unfavorable opinion to Axl’s band. However, Rose did not let the conflict escalate; he wanted to have a tour with Nirvana. When the musician received a harsh rejection, he stopped being sensitive to talk about Cobain and his wife. The artists’ opposition finished after Kurt’s death in 1994.

The more the group’s popularity increased, the more reserved Rose became. The disagreement among the members led to the split up in 1994. Axl gave no interviews at that period. Seven years later, Guns N' Roses appeared on the stage with the new team members; they have been giving regular shows since that time.

Axl met his would-be wife, Erin Everly, at the beginning of 1986 in a New York club. In summer, the couple started dating; the woman moved to Los Angeles to live with her lover and got hired as a model. Nobody expected the young people’s relationship to last long: they frequently had fights, screamed at each other, and rattled dishes.

The stressful romance lasted for four years and manifested itself in the majority of the artist’s songs written at that time. According to Erin, Axl told her one morning he had a gun in his car; if she did not accept his proposal, he would shoot himself dead. The wedding took place the next day; everybody was celebrating it for 27 days.

In September, the woman got pregnant, but she miscarried in the third month. When Rose learned about it, he went to the house, where the couple had planned to move, and destroyed everything there; the cost of the damage was hundreds of thousands of dollars. The next day, Erin came to the house and destroyed everything left. In November 1990, the woman left Rose forever after another scandal.

According to the musician, Erin was the only person he loved genuinely. Other details of the artist’s personal life remain unknown; rumors have it that the singer is still in touch with his ex.

The next year, the group was looking for an actress to appear in three music videos. The top model Stephanie Seymour captured Axl’s heart immediately; he called her after the first filming day, and people saw the couple in each other’s arms during fashion shows.

The soloist’s mental condition was poor: three weeks after the engagement, the lovers broke up. Axl suspected Stephanie of cheating and kept blaming her; the model fled from the house. Nine months later, she gave birth to a daughter of the newspaper owner Peter Brant whom she married in 1995.

The following affairs were not long. In 1993, the man met the model Jennifer Driver who appeared in the group’s music video. The young people began to date but split up for some reason.

Axl Rose has never had calm, smooth relationships with women. He has no children. The artist used to date his personal assistant Elizabeth; the media also reported about his meetings with Lana Del Rey, Sasha Volkova, and others.

The musician was diagnosed with bipolar disorder, but Axl doubts he has it. Specialists claim that Rose’s behavior matches the disease symptoms. Teenage Axl was often arrested for physical violence, and he often had conflicts with his adult colleagues. The celebrity believes it is just his emotional nature: he is easy to upset. However, he listened to doctors’ recommendations and underwent an anger management course, including the treatment with lithium.

After 50, Axl Rose had surgery to change the shape of his nose and chin.

Today, the artist continues to develop his career; he is the frontman of AC/DC and Guns N’ Roses.

Rose has a verified Twitter account and often posts photos and videos from his daily life. Besides, the vocalist’s pictures are published on the official Instagram page of Guns N' Roses.

The original group changed their concert schedule in summer 2018 to meet FIFA World Cup fans in Russia. Overall, the tour included 157 shows in six continents; it began on April 1, 2016, and finished on November 29, 2018, in Johannesburg.

Slash, Axl, and Duff did not appear on the stage together for 23 years. The first concert after the band’s reunion took place in Troubadour club, West Hollywood. It could have been the last one as Rose trapped himself in cables on the stage, fell off, and had his leg broken. Still, Dave Grohl gave him a wheelchair, and other tour shows were held successfully.

The vocalist’s height is 5.74 feet (175 cm.), and his weight is about 176 lbs. (80 kg.). The man has several tattoos, including a red and black heart; he added wings to the picture as the symbol of freedom and aspiration.