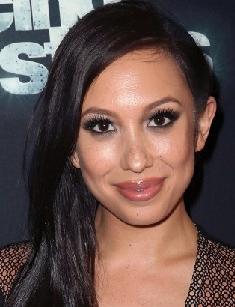 Cheryl Stephanie Lawrence (née Burke) is a famous American dancer, model, and TV host. She came to prominence after starring on ABC's Dancing with the Stars (DWTS). Interestingly, there she was the first female professional to win the show and the first professional to win twice and consecutively. Also, she replaced Abby Lee Miller on Dance Moms in 2017.

Why is Cheryl Burke popular? What makes her so special? Let’s know!

Cheryl Burke's birthplace is San Mateo County, California – she was born there on May 3, 1984, to the family of Stephen and Sherrie Burke. Cheryl has two sisters.

Dancing with the Stars

Cheryl Burke became the winner of her first championship with Drew Lachey in the second season. Later, the talented girl won her second championship with retired football star Emmitt Smith in the third season. Burke returned to the ballroom on March 19, 2007, for Season 4. She was paired with actor Ian Ziering. They left the show in the semifinals on May 15, 2007.

Burke took part in a Dancing with the Stars tour which was held from December 19, 2006, to February 11, 2007. Totally, they visited 38 cities. She also embarked on the second summer tour, which visited 24 cities between June 20, 2007, in Austin, Texas, and July 24, 2007, in Vancouver, British Columbia, Canada. Lachey was her celebrity partner for both tours. Burke performed on season 5 with Las Vegas entertainer Wayne Newton. They were the third couple eliminated from the competition, on October 9, 2007.

2007 was marked by Burke's participation in the winter tour.

She appeared in season 7 alongside Maurice Greene. Week 8 happened to be the last for them. The next season, Cheryl was paired with Gilles Marini. They finished second after Shawn Johnson and Mark Ballas. In season 9, Burke was paired with Tom DeLay. They had to leave the show because of his serious injury.

After season 19, Cheryl Burke left the show cause her contract had expired. She returned to the project on August 30, 2016. It was season 25 – she was paired with Olympic swimmer Ryan Lochte. In season 25, the celebrity was paired with former wide receiver Terrell Owens – the pair finished in 6th place. After taking another season off, she returned once again for season 27 where she performed alongside actor Juan Pablo Di Pace. Although they earned 5 perfect scores and held the highest average of the season, they were shockingly eliminated in the semi-finals.

Speaking about Cheryl Burke’s past relationships, earlier, she dated JT Torregiani. They had known each other for about ten years but started their relationship in 2014. They used to hang out in the same circle of friends and just connected over the summer.

Torregiani is the successful owner of Warwick, Ketchup, and Aventine Hollywood, California. When JT Torregiani was invited to Hollywood Medium with Tyler Henry, he told he had become involved in the restaurant and hospitality industry in the early 90s – he had been a college student at that time. Having moved to Los Angeles in 2000, JT became a fixture on the Hollywood dining and nightlife scenes, hosting celebrities at various venues throughout the city and working with them during the day as a fitness advisor. He became an investor in several venues and soon became a prominent entrepreneur upon teaming up on an executive level with The Dolce Group.

When Cheryl Burke dated Torregiani, she was paired with sexy heartthrob Antonio Sabato Jr. on Dancing With The Stars. Because of it, the rumors appeared that Burke was an infidel and betrayed her boyfriend. However, she declined all the accusations.

The couple has broken up for unknown reasons.

In 2017 the news appeared Cheryl Burke had started relationship with Matthew Lawrence. They met in 2006 – when his brother Joey was cast on Dancing with the Stars. Remarkably, Lawrence was Cheryl’s past boyfriend - they had previously dated from 2007-2008. Matthew proposed Cheryl on May 3, 2018 – it was her 34th birthday.

Besides performing on stage, Cheryl Burke has tried out writing. So, she told Good Morning America that in 2011 she released her autobiography, «Dancing Lessons.» In the book Burke shared the secret she had been hiding through the years - at the age of 5 she was molested by a handyman helping her family, who repeatedly fondled her.

She believed it was wrong but wanted to gain the affection of the person. The man was sentenced to 22 years in jail and was released in 2008. Burke has done numerous promotions outside of Dancing with the Stars which include Depend Silhouette briefs, Impress Nails and Sargento Cheese. The woman said her life was divided into «then» and «now» when she began her show-business career.

Cheryl Burke opened her first dance studio in April 2008 and became an owner of the line of activewear the next year.