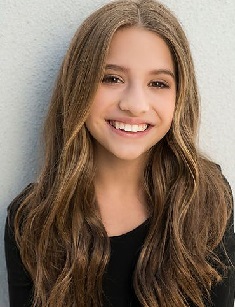 Mackenzie Frances Ziegler is a young famous American dancer, singer, actress and a model. Besides, she is a star of the reality dance show Dance Moms, of the sitcom Nicky, Ricky, Dicky & Dawn, Total Eclipse and Dancing with the Stars: Juniors (where she was paired with Sage Rosen.) Little celebrity started growing popular in 2014 when her debut album Mack Z was released.

Apart from performing, Mackenzie is popular in Social Media – she has more than 12 million followers on Instagram, near 10 million fans in Musical.ly, 3 million YouTube subscribers, and one million Twitter followers.

Mackenzie Ziegler's birthplace is Pittsburgh, Pennsylvania, the United States. She was born there on June 4, 2004, to the family of Melissa Ziegler-Gisoni and Kurt Ziegler. As a kid, Mackenzie moved to Murraysville, Pennsylvania, where she passed her childhood. Her parents faced the turmoil of bankruptcy when she was little.

At the age of 6, Ziegler got through her parents' divorce. Four years later, her mother found a new boyfriend Greg Gisoni and remarried. Besides Mackenzie, there was another daughter Maddie – she is also a dancer and actress. In her own words, Maddie is a big inspiration to her, and she looks up to her for everything. Also, Ziegler has paternal half-brothers, Ryan and Tyler, and two older step-siblings, Matthew and Michelle. Ziegler became interested in singing lyrics and dancing in the very childhood – she enrolled in the Abby Lee Dance Company as a 2-year-old baby.

Mackenzie doesn't attend school – she gets an education at home.

2011 is thought to be the beginning of Mackenzie Ziegler's career. That time she first appeared on the reality dance show Dance Moms, alongside her mother and sister. She starred on the show for five years – in 2016 she left it for the sake of working on other projects. The celebrity was invited to such shows as sister shows Abby's Ultimate Dance Competition and Abby's Studio Rescue.

In 2014 Mackenzie released her own first music project – the album called «Mack Z.» The collection got to the No. 1 on the iTunes pop charts, and to the No. 7 on iTunes' albums sales chart across all genres. The music video for the collection's track «Girl Party» finished 1st on the iTunes pop chart. It grabbed more than 60 million viewers. Another album’s most famous song was «Out Of My Mind.» The same year, Mackenzie pleased her fans by releasing videos for «Shine» and «Christmas All Year Long» were published. The following videos were released in 2015 and 2016. Ziegler also covered a song «Dusk Till Dawn.»

In 2014 Mackenzie's sister Maddie released together with a limited edition fashion line, The Maddie & Mackenzie Collection, through Mod Angel.

In 2015 Mackenzie's fans could see her on Nickelodeon's sitcom Nicky, Ricky, Dicky & Dawn and in commercials with her sister. She was invited to star on Nicky, Ricky, Dicky & Dawn again in January 2017 – she acted in the episode Keeping Up with the Quardashians. In 2015, the celebrity walked the Polo Ralph Lauren Runway in New York City and appeared in an ad campaign video for Glamour Magazine.

In 2016 Mackenzie added single under her full name, a duet with singer Johnny Orlando, titled «Day & Night» to the list of her works. The world could see its music video on December 21, 2016, - it grabbed 20 million viewers. In April 2017, Ziegler's fans listened to her new top song «Monsters (AKA Haters).» The track's music video was seen by near 18 million viewers. In 2017 Mackenzie embarked on a concert tour throughout North America and the UK with Orlando as a support of their single.

The same year, the singer published a video for «Breathe» which got more than 25 million viewers. Besides, the video of her 2018 duet with Orlando, «What If,» has been viewed more than 20 million times.

In 2016, she and her sister were the faces of Clean & Clear's fall back-to-school campaign. Ziegler also took part in a photo shoot for Polo Ralph Lauren's children's spring 2016 collection and for girls' fashion line Emily West in 2017. In 2017 and 2018 the celebrity became a partner of dance-inspired activewear clothing lines with tween retailer Justice. Together they released a video for her single «Teamwork» which was dedicated to anti-bullying. The video got more than 20 million views on YouTube. The same year, Ziegler succeeded to release a tee-shirt line called Tee4Too. In 2016, Ziegler collaborated with TurnBoard to release the «Kenzie Ziegler TurnBoard.»

In 2017 Mackenzie was named one of the most popular Social Media celebrities.

In 2018 she acted as Cassie, a teenage girl who dreams about being an astronaut on the moon to cope with unpopularity, in the high school drama series Total Eclipse on the digital network. The series' third season was premiered in March 2019. Moreover, Ziegler is the show's executive producer. Besides, she starred in movie Brat Holiday Spectacular (2018). The same year, two sisters Ziegler appeared on The Slow Mo Guys YouTube channel.

The celebrity also tried out writing – in May 2018 she published a self-help book in May 2018, titled Kenzie's Rules for Life: How to be Happy, Healthy, and Dance to Your Own Beat, «a collection of inspirational, upbeat lessons for kids learning to navigate life.» In Autumn, Mackenzie launched her own cosmetics line, «Love, Kenzie.»

On November 20, 2017, Ziegler's second studio album called «Phases» was released. Its single «Nothing On Us» had been published earlier – on August 3, 2018. In December 2018, Ziegler starred as Dorothy in a holiday stage pantomime adaptation, The Wonderful Winter of Oz, in Pasadena, California. In mid-2019, Ziegler is set to tour the US as the warm-up act for PrettyMuch.

Mackenzie Ziegler’s net worth is evaluated at $2 million.

Mackenzie Ziegler is currently single as she is very young to date a guy and set a family. She is believed to be away from any sorts of relationships at the present times. However, earlier, the actress was rumored to have been dating Ashton Arbab, movie and television actor. Mackenzie currently lives in Murrysville with her mother and step-dad.

In 2012, Mackenzie Ziegler, her sister Maddie and mother, collaborated with Starlight Children's Foundation – the organization aimed to raise awareness for chronically ill youth. Besides, Zielger worked together with Love Your Melon and Dancers Against Cancer to raise awareness and funding for childhood cancer

In 2016, Ziegler and her sister had opened an organization which enables people to send homemade cards to orphan children. Her sister was chosen in the list of charitable young celebrities in 2016.

Several years ago, there was a poll in the Internet – Mackenzie Ziegler was set against Annie LeBlanc and Jojo Siwa: who is better? Their fans discussed fiercely.

It should be noted that Mackenzie always improves, develops her talents. In her recent interview, she said she liked seeing old pictures and videos and comparing her personality before and after fame – to note how greatly she has changed, how through the years she has turned out from a shy girl with braces to a beautiful self-confident celebrity.