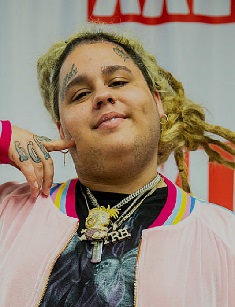 Fat Nick (original name is Nicky Gordo) is a famous American rap singer, songwriter. Due to his talent and hardworking, he has fame and a steady paycheck. Nick gained recognition pretty recently – his career started in 2013 after releasing of his debut musical project – «Buffet Boys.» Nick is a member of a Miami, FL based collective «Buffet Boys» since 2014. Besides him, Pouya (rapper) also works there.

After Nick joined the collective, he became growing more and more popular. In his career, the musician has collaborated with Ghostemane, $uicideboy$, Lil Peep, Lil Pump. It is high time for us to emerge in Fat Nick’s history!

Fat Nick’s biography starts in Miami, Florida, The United States, where he was born on September 6, 1994. As a teenager, Nick dropped out of High School, having graduated from the 9th grade. In his future interview, the celebrity said he thought school was one of the worst things ever. According to him, there are several occupations which demand getting education. However, if a person chooses creativity as his life way (for example, rap music, dancing, art), he doesn’t need to attend school.

With regard to Fat Nick’s parents, his father has been an entrepreneur – he has owned a luxurious hotel. It means the family has never had financial problems. Fat Nick’s dad is of Greek nationality. However, Nick himself has never visited his father’s motherland. As for his mother, she is from Peru. Such an unusual blood fusion produced this talented boy.

As a kid, Fat Nick was keen on skateboarding. Interestingly, he continues doing his hobby even nowadays – when he has free time, he is most probably to go skateboarding. Besides, being a child, Nick dreamt about becoming a chef. However, over time, he lost this his intention. It was substituted only by the love for cooking.

Nick became interested in rap music in the very infancy – he wrote his own lyrics, tried to perform in front of the parents. Initially, they didn’t accept their son’s choice. However, later, when they saw that rap was Nick’s passion, they started supporting him.

From the infancy Fat Nick has been overweight. However, he doesn’t feel embarrassed about it and openly shows his weight in Social Media. By his example, the musician calls overweight people out not to be afraid of being themselves. He supports the idea that if a fat person is on the beach, he shouldn’t have a fear of taking off his T-shirt. According to him, girls like such confident and fearless boys.

2014 was marked by releasing of Fat Nick’s album called «Tha Heart Attack.» The project includes 13 tracks. Pouya and Germ helped in the album’s recording. Having noted how his works spread and became real hits, Nick was inspired for working even harder.

In 2014 the rapper joined the «Buffet Boys» music collective.

The next year, Fat Nick released «Fat Camp» – the album of 18 songs. Eddy Baker, Mikey The Magician, Lamb$, Germ, and Pouya were invited to take part in its recording. Mostly, fans liked the tracks «All Over Me», «Too Much».

So, Fat Nick chose an appropriate schedule for releasing his works – every year he drops one project. So, one year later, in 2016 the singer pleased his fans by releasing album «When The Lean Runs Out.» The work included 15 singles recorded in the artist’s corporate style – uncomplicated texts. The album featured such celebrities as Lil Peep, Chris Travis, Da$H, Shakewell, Mikey The Magician.

In 2017 Fat Nick added album entitled «Drop Out Of School» to the list of his projects. It included chipper songs which make their listeners dance as soon as they hear the first line. Some of the collection’s most famous singles are «Middle of the Mall» and «Torch.»

In 2018 people could listen to musician’s new album called «Generation Numb» including 11 songs. Interestingly, collection’s listeners noted lots of Autotune’s effects on the tracks. However, the app only helped the songs become hits. The album featured Bexey and Ohgeesy. Celebrity’s fans fully appreciated the project. Especially they liked the single «Slow It Down.»

In his admissions, Fat Nick once said he was inspired for music by Chief Keef, Kid Cudi and Lil Wayne.

In 2017 Fat Nick had some conflicts with Bad Bunny after the latter said inappropriate words about deceased Lil Peep.

Speaking about Fat Nick’s dating story, according to him, he has had three serious relationships in his life. Once in an interview, Fat Nick shared that a girlfriend (whose name is unknown) had broken his heart. However, the singer considers this situation as one of life’s trial and goes on working.

Nick’s net worth is evaluated at $400,000. In addition to music, he sells a variety of merchandise (tees, hoodies).