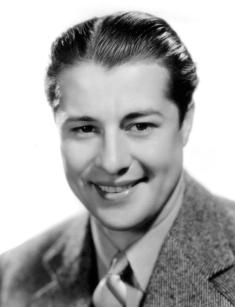 Don Ameche, a prominent actor from America, is undoubtedly one of the best representatives of show-business of the 20th century. Having played in near 70 pictures in total, the actor received lots of awards, including Oscars. Although nowadays he is dead, memory about his contribution to the world of cinema is absolutely to never die.

Ameche was raised in the family of Felice Amici who worked as a bartender and his wife Barbara Etta. As for his race, the celebrity is of mixed nationality. So, he has a fusion of Scottish, German and Irish blood. His family was an extended one – Ameche was brought up alongside three brothers and four sisters.

As a teenager, Ameche planned to become a lawyer or a politician. However, over following several years, he understood he was more inclined to creativity, to performing on stage.

While studying at a college, he acted in its performances, plays, musicals.

The year 1935 is thought to be the beginning of Ameche's acting career. So, then he got the role of a prisoner in the picture entitled Clive of India and was seen playing in the movie Dante's Inferno. As these roles were secondary ones, Ameche failed to come to prominence after appearing there. The following year brought him the role of Mario Signorelli in the picture Sins of Man – it happened to be a big commercial success.

As time passed, Don Ameche got the reputation of one of the most prominent Hollywood actors. In 1937 he was invited to star in such projects as Gateway, Midnight and Ramona among others. Interestingly, the actor tried himself in different movie genres – he played in dramas, comedies, and detectives.

1939 was marked by Ameche's appearance in the historical picture The Story of Alexander Graham Bell – viewers appreciated the movie very much. The story showed how the scientist invented the telephone, what ordeals he met.

In the 1940s, Don Ameche starred in more than twenty pictures. The majority of them were successful and led the actor to recognition. In 1943 fans could see him playing the role of Henry Van Cleve in the movie Heaven Can Wait. The project was based on a play named Birthday. Besides, he played in Greenwich Village, Guest Wife (alongside Claudette Colbert), Down Argentine Way (alongside Betty Grable) and So Goes My Love (alongside Myrna Loy) around that time.

Thus, Don Ameche got almost the highest salary for starring in pictures – it demonstrated his brilliant talent. His popularity can be compared to Brad Pitt’s current one. At the end of the 1940s, the celebrity turned to radio. So, he worked as an announcer and host of several programs and eventually was named a major radio entertainer.

In 1961 the actor embarked on a tour around Europe making content about circuses for the show International Showtime which premiered on NBC.

In 1966 viewers of the picture Picture Mommy Dead could see Ameche playing one of the leading roles. 1968 brought him the role in the picture entitled Shadow Over Elveron and on the show Quincy.

In 1983 he co-starred alongside Ralph Bellamy in the picture Trading Places.

In spite of his age, Ameche refused to stop working. Speaking about Don Ameche's last projects, he acted in The Golden Girls and Oddball Hall in 1990. Then he also was invited to star in Cocoon and Corrina, Corrina.

In 1932 the actor tied the knot with Honore Prendergast. The two were parents for six kids. The spouses remained together until Honore's death in 1986.

December 6, 1993, is the date of Don Ameche's death. He was found dead in Arizona at his son's houses. The reason for his passing away became prostate cancer. His corpse was cremated.

By the end of Ameche’s life, his net worth had been evaluated at $10 million.