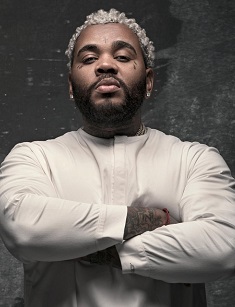 Kevin Gates is an American rapper, singer and entrepreneur, who became hugely popular after the release of his debut studio album Islah. The rapper is known mostly for his autobiographical themes in his songs. Gates has been involved in numerous controversies throughout his life on several occasions which ended up with altercations with the law.

Kevin Jerome comes from New Orleans, the United States. Almost immediately after his birth, his family moved to Baton Rouge, a poor neighborhood, where he spent his childhood. He has a younger brother and a younger sister.

Kevin was raised by his mother and grandparents. His grandmother was an English teacher, and she stressed to him the importance of reading. His grandfather was an attorney. As Kevin said, he was the only real father figure he ever had in his life.

Kevin had a difficult childhood, so he found solace in music. He listened to south rock, punk rock, rock and roll, and hip-hop. Above all, Kevin had a keen interest in rap and started writing songs from the age of 14.

From childhood, Gates had problems with the law. He was arrested for the first time in 1999 at the age of 13 for being a passenger in a stolen car. Before he went to jail, he couldn't even imagine how it would affect his future life.

When he was 17, he briefly attended Baton Rouge Community College. He missed classes and spent most of the time in the streets. When he started to rap, he wasn't sure he would become a star, but he was aware that he had to fight hard to escape the poverty of Baton Rouge.

Kevin's music career began in 2005 after he signed to Dead Game Records, a local label. He worked in the company of Torrence Hatch and Webster Gradney Jr. In 2007, they put out their joint mixtape called Pack of Da Littler. In 2008, their second mixtape All or Nuthin was released.

The same year, Kevin had problems with the law and spent more than two years in prison. After the rapper was let out, he continued working on his music. The mixtape Make Em Believe brought him a huge success.

In 2009, Behind Enemy Lines was released as a retail project available on iTunes.

In 2013, Gates released the mixtape, The Luca Brasi Story with twenty-two tracks, including songs Around Me, Just Ride, Arms Of A Stranger, and others. The American monthly magazine Rolling Stone named the mixtape's single, Wylin', the 40th best song of 2013.

In 2014, the mixtape By Any Means came out, released by his Bread Winners’ Association Label. It was distributed by Atlantic Records. The album received mostly positive reviews and debuted at number 17 on the Billboard 200. The hit singles were Don’t Know, Posed to be in Love, and Amnesia.

The same year Kevin put out one more successful mixtape called Luka Brasi 2. It debuted at number 38 on the US Billboard 200.

In 2016, another smash album was released. The mixtape named Murder for Hire 2 debuted at number 2 on the Billboard 200 and became a hit.

In January 2016, Kevin's debut studio album Islah was released. The meaning of its title translates as “to make better.” Top hits were songs 2 Phones, Time for That, and Really Really. The album debuted at number two on the Billboard 200.

On September 22, 2017, Dreka, Kevin's wife, released the album By Any Means 2 while Kevin stayed in prison. She was the manager of the project.

In May 2018, Gates released the three-song EP Chained to the City, which all gained good critics. His single Know Better was used on the soundtrack of the movie Suicide Squad.

The same year he was a part of collaboration together with Moneybagg Yo and producer Rvssian for the song Fall Down. Fans have been waiting for the joint work of these artists.

The rapper also has unreleased songs, some of them include: As I Recall, True Life Story, Remember Me, and many others. His wife once admitted that Kevin would need to release a separate album with his unreleased songs.

On July 30, 2019, Kevin Gates and the Cardi B performs at the official after party for the Invasion of Privacy concert at Limelight, Indianapolis, the U.S.

On June 22, 2019, during the 3Kingz Tour Kevin Gates, NBA YoungBoy, Gunna, Young Dolph, DaBaby and Quando Rondo will appear on the scene at the United Center, Chicago, Illinois, the U.S. The artists will give individual performances of their hit songs.

In the last tracks, Kevin began to pay more attention to singing, having trained with the professional singer. Having grown in poverty, Kevin Gates tries to depict all his memories as realistic as possible. Many critics note that Kevin's music style is melodic but at the same time is tough. But honesty in his words is something for which he is loved and respected.

In October 2015, Kevin married his longtime girlfriend, Dreka Haynes. The partners are from different families: Kevin spent his childhood and youth trying to survive in poverty, and Dreka was raised in a wealthy family.

The couple has two children, Islah and Khaza. Gates confessed that he had children by other women. He supports them financially.

Almost each Kevin’s interview, the rapper speaks out about Dreka. He is full of love for his wife and their kids. He tells that Dreka is the best gift fate gave him. It is a known fact that his beautiful wife has always been a driving force in Kevin's career. She is his manager, a wife, and a mother of his kids. Moreover, she drives her clothing line and is engaged in producing skincare products.

The duo is a practicing Muslim. In September 2016, the couple went to Mecca for Hajj. From Kevin's point of view, all religions are about love, and he respects each of them.

Kevin wears a permanent diamond grill. In the video he shows how he keeps it shining and how to clean it. He also put out the diamond tester before grill to prove that all diamonds are real.

Gates is known for his various tattoos: he has a star right next to his eye which represents God. He has a cross on his forehead which is a mark of a soldier. He also has a compass tattoo and the most interesting is the one most unexpected for a rapper to have: a tattoo of Elvis Presley on his chest.

The musician has over 7,5 million followers on his Instagram, where he regularly posts about music.

His net worth is estimated at around $1 million.

At the age of 13, it was the first time when Kevin was arrested. The rapper was imprisoned for being a passenger in a stolen vehicle.

In 2003, Gates was involved in a hassle outside a movie theater and stabbed his opponent multiple times.

In 2008, Kevin again committed a crime and was put in prison. He gained a sentence on 30 months because he was caught in possession of a drug and a firearm he didn't have a permit for. This experience was a lesson for him, and he decided to educate himself in psychology. He earned some kind of degree after finishing a prison education program. The rapper was released earlier due to his good behavior in prison.

In the summer of 2015, Gates was charged with battery for kicking a fan during the concert at an event in Lakeland, Florida. He used Florida's stand-your-ground law in defense. On October 26, 2016, he was convicted of the charge and sentenced to 180 days in jail. In 2017, Gates was sentenced to a 30-month prison term at the East Moline, IL correctional facility for gun charges stemming from a 2013 incident. The rapper was released on parole on January 10, 2018.