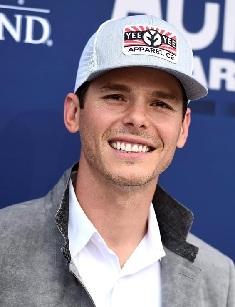 Granger Kelly Smith is Texas native. Born there in 1979, he started his music career in 1998 by writing his first professional contract. Nowadays, he is a well-known country music singer. Granger wrote his songs by himself. In his career, he performed in White House three times. Granger’s top songs are “City Boy Stuck”, “The Country Boy Song”, “If The Boot Fits”, “Happens Like That”, and “Backroad Song”.

According to several sources, Granger’s net worth is estimated to be around $6 million. He earns most of his wealth from his incredible music career as well as from advertisements and public appearances.

Granger Kelly Smith was born on September 4, 1979. He spent his childhood in Dallas with his brother Tyler. He studied in local Lake Highlands High School. He liked to play football, did hunting and fishing. When Granger was 14, he started interesting in music. He learned to play the guitar himself. Then he thought the guitar would make girls pay attention to him. That year he attended as many George Strait concerts as he could and worked feverishly on sharpening his playing skills.

He grew up singing around Dallas. He found himself performing weekends on every small town stage in North Texas he could find. Smith enrolled Texas A&M University and began booking his own shows as well as instructing himself how to edit video and make a record on the cheap. When he was 19, he signed a contract with EMI Music Publishing. Granger was happy to be working in music. Signed the contract, he moved to Nashville but returned to Texas after his stint there. He graduated with a bachelor’s degree and started a band.

Nothing much came of that time except education, which Smith and his brother and manager have rolled into a savvy, self-aware approach to surviving the music industry. They were playing shows where they had on a good night, 220 people, but most nights were like 100, 150 or 175. And there were the nights that they have only a hundred people. His first songs were “As It is in Texas”, “Little Town”, and “Count the Stars”. He self-released a series of albums like “Memory Rd.”, “Waiting on Forever” and “Don’t Listen to the Radio”.

The creation of Granger’s alter ego was one of the major driving forces that changed the trajectory of his music career. After the return, he played gigs wherever he could, shot homemade music videos with his brother and sold his album out of the back of his truck, vans and honky-Tonk bars.

It was difficult to find gigs and draw crowds so Granger and his brothers decided to make a different type of video to see if they could get it to go viral. In 2011, Granger and his brothers shot a video using their country alter-egos, including Earl Dibbles Jr. The initial video got one million views on YouTube. Earl’s musical debut came next with his music video “The Country Boy Song” which went twice as viral.

Granger Smith was rapidly becoming a household name in the country music scene. He has toured the country countless times, playing in notable spots like the White House multiple times. Granger also toured nine other countries on two other continents, playing for the troops overseas in Iraq and Kuwait, where he wrote a song about military.

He has even performed at the Grizzly Rose several times. His seventh studio album “Dirt Road Driveway”, released in 2013, was included to the main twenties of various country and indie top US charts. There were such outstanding songs as “Easy”, “We Do It In A Field”, “Stick Around” and others.

In 2015 formerly-indie artist Granger Smith officially signed on as the newest member of BBR Music Group’s roster, home to artists like Jason Aldean and Dustin Lynch. Some fans were worried that his teaming up with a big-name label would damage his style and creativity. The deal included Smith's lovable redneck alter-ego, Earl Dibbles Jr.

Together they had created quite a buzz in the country music world, cultivating a social media following of nearly four million and consistently selling out shows across the U.S. Combined with the success of Smith's “4x4” EP, BBR was excited to sign the artist. Smith’s major-label debut album was released in 2016, called “Remington”. There were such popular tracks as “Crazy as Me”, “Backroad Song”, “Tractor”, and “Around the Sun”.

In 2017 Smith issued his latest studio album, “When the Good Guys Win”. It debuted at number 2 on Billboard’s Top Country Albums, with 15,000 copies sold. It included 14 songs. Some of them are “Raise Up Your Glass”, “Gimme Something”, “Never Too Old” and “Love Ain’t Blind”. In 2018 Smith performed with Rodney Atkins in Prior Lake, Minneapolis.

At the beginning of 2019, Granger was on tour promoting his latest album. After his and Kane Brown tour, Smith made a stop on his solo tour at the Grizzly Rose. On May 31, 2019, Granger issued the new song, called “Damn Strait”. He was sure people would guess what that title is about. On Instagram, he wrote that it was his favorite music video and song combo that he has released this year. He called this song a throwback version of himself. The lyrics of the new song made him feel sad for the guy in the story..., and sad country music made him happy.

On February 11, 2010, Granger Smith married actress Amber Emily Bartlett. He met her for the first time while filming a music video, and after that, Emily has featured in several of his music videos. Emily is known for her roles in such movies as “Monsterwolf,” “Hot Air” and “Beneath the Darkness”. She graduated from the University of Texas with a Bachelor of Arts degree in Broadcast Communication/News in 2005.

In 2011 Emily gave birth to their first child, a daughter, London. In 2014 they became parents the second time. A boy Lincoln Monarch Smith was born. Their third child, the son, River Kelly Smith, appeared in 2016.

Unfortunately, on June 6, 2019, Granger Smith posted a heartbreaking message about the death of his youngest son River, because of “drowning accident at their home”. He wrote that he had to deliver unthinkable news and that they had lost their youngest son, River Kelly Smith. Following a tragic accident, and despite the doctor’s best efforts, he has been unable to be revived. The couple decided to say their last goodbyes and donate River’s organs so that other children would be given a second chance at life.

Also, he reported that their family was devastated and heartbroken, but they took solace in knowing River was with his Heavenly Father. Riv has been special. Everyone that has met him has known that immediately. The joy River brought to their lives couldn’t be expressed, and his light would be forever in their hearts. If there were words to say more, Granger couldn’t find them at that moment. According to country singer, there had never been a more difficult moment for them than that.