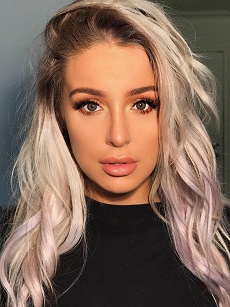 She has somewhat troubled youth; as a teenager, the girl tried smoking, alcohol, and drugs at an early age. The blogger tells about her background in various videos. Thus, Tana shared that she was stalked when she was in the second grade.

She gained popularity as a blogger who prefers the candid style of communication with subscribers. Tana is crude and realistic; the girl is not afraid of disapproval or being mocked and tells people all about her personal life. She bravely mixes professional and personal life, discovering the darkest side of her livelihood. Being a Vegas girl, Tana shares her views about social incidents and other assorted debaucheries. She is sincere and acts completely nonchalant; as a result, there is both a significant amount of her fans and haters. Probably this is a secret of her meteoric rise to stardom.

She came into limelight as a blogger talking about her everyday life, beauty, and many other topics. For example, the blogger attracted much attention after dental surgery, talking about this experience as one of the worst one in her life.

Tana has gained a status “beauty pro” among her subscribers after the video where she displays her makeup routine. Thanks to such kind of videos, Tana was invited to various parties circuit.

She took part in a popular multi-genre online video conference, known as VidCon. But in 2018 she decided to create her convention and named it Tanacon. The event failed due to a poor organization. The fire marshals shut down the game because of safety hazards. There were a lot of dissatisfied people, and Tana had to apologize. Tana also took part in Coachella where her look could be defined as “go hard or go home.”

But this is not the only hot photos which Tana shares on social media. She was under scrutiny after posting sexualized version of 15-year-old influencer Jojo Siwa. People called into question the appropriateness of this appearance.

Besides YouTube career, Tana works in MTV as a reality star, thus in 2019 she has featured on a new show “Tana Turns 21”. She also took part in Power Rangers video playing pink power ranger.

She was a heroine of a famous series of IDubbbzTV, who discusses the blogger’s behavior and content of the channel. The blogger admits that she speaks from her heart, but also underlines various shortcomings, ignorance, and hypocrisy among them.

After content cop, there is much attention to her personality, and Tana uploaded her video response.

Besides, people suspect that she uses Photoshop to make her body hotter. There is a lot of convincing evidence on the Internet as her surrounding often post photos with Tana but without Photoshop.

She is good at acting, modeling, swimming, and making funny videos. The list of her past boyfriends and girlfriends includes Bella Thorne, Mac Miller, Brad Sousa, Somer Hollingsworth, and Lil Xan. In 2017 she announced about her engagement with Jake Paul.

At present, Tana's net worth is estimated at $1 million.